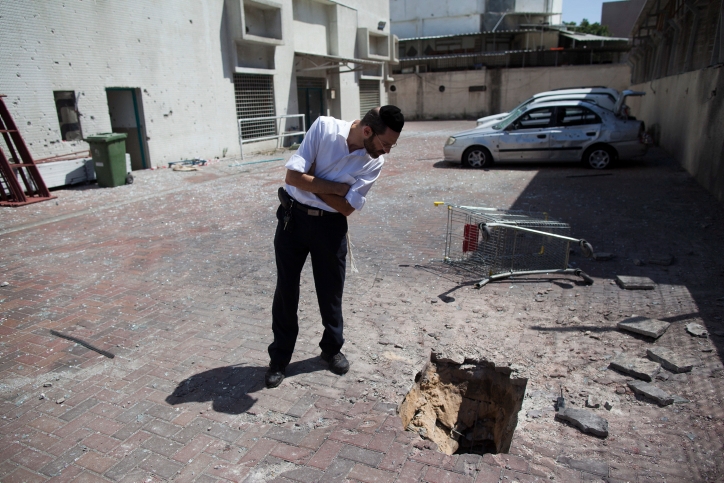 An Israeli inspects the damage from a Palestinian rocket strike outside a store in the southern Israeli city of Ashdod, July 9, 2014. (Yonatan Sindel/Flash90)
Advertisement

(JTA) – The Israeli military reportedly has hit more targets in Gaza in the first day and a half of a bombing campaign to curb rocket fire than during its entire eight-day operation in November 2012.

The Jerusalem Post quoted an anonymous senior Israeli security source on Wednesday but did not quantify the number of targets hit in the current operation, which the Israel Defense Forces has dubbed Protective Edge.

“Hamas has been surprised by Israel’s response. We systematically struck operational infrastructure, where Hamas commanders operate,” the source said, according to the Post. “There’s not a single Hamas brigade commander that has a home to go back to.”

The source said the IDF has used 400 tons of explosives against targets in Gaza.

Meanwhile, some 72 rockets fired from Gaza struck Israel on Wednesday, the second day since the launch of the IDF campaign in Gaza. Three of the rockets were fired at Dimona, the site of Israel’s nuclear plant; one was intercepted by the Iron Dome missile defense system and the other two fell in open areas.

The farthest-reaching rocket so far landed in the vicinity of Zichron Yakov, an Israeli town situated about 80 miles north of Gaza, just south of Haifa.

Haifa, which came under heavy rocket fire from the north during Israel’s 2006 war with Hezbollah in Lebanon, announced Wednesday that it was reopening its bomb shelters.

Gaza rocket crews also have targeted Jerusalem, Tel Aviv and Israel’s airport, where incoming flights have changed their usual landing routes as a safety precaution. El Al, Israel’s national airline, said Wednesday that it would allow travelers with bookings to Israel through July 18 to cancel or reschedule their trips at no extra charge.

An armed scuba diver from Gaza was killed and a second is being pursued after they attempted to infiltrate Israel by the sea for the second time in two nights on Wednesday night. Five infiltrators from Gaza were killed by Israeli troops the previous evening.

Though Israel’s Cabinet authorized the call-up on Tuesday of up to 40,000 reserve troops, the IDF has yet to mobilize significant numbers of reservists.

Israeli Prime Minister Benjamin Netanyahu warned that Palestinian terrorists would pay a “heavy price” for their rocket fire against Israel and said he is prepared to “further intensify attacks on Hamas.” President Shimon Peres said an Israeli ground offensive could happen in Gaza “quite soon.”

So far, about 40 Palestinians in Gaza have been reported killed in the operation. Israel has not reported any deaths.

The hostilities between Israel and Gaza come in the wake of the murder of three Israeli teenagers abducted last month from a hitchhiking post in the West Bank, and the subsequent murder by Jewish extremists of a Palestinian teenager in Jerusalem. The Palestinian’s murder was followed by Palestinian rioting and rocket fire from Gaza.

Israel has arrested six suspects in the case of the murdered Palestinian teen. Suspects in the murder of the Israeli teens have yet to be apprehended; Israel said members of Hamas are responsible for the slayings.