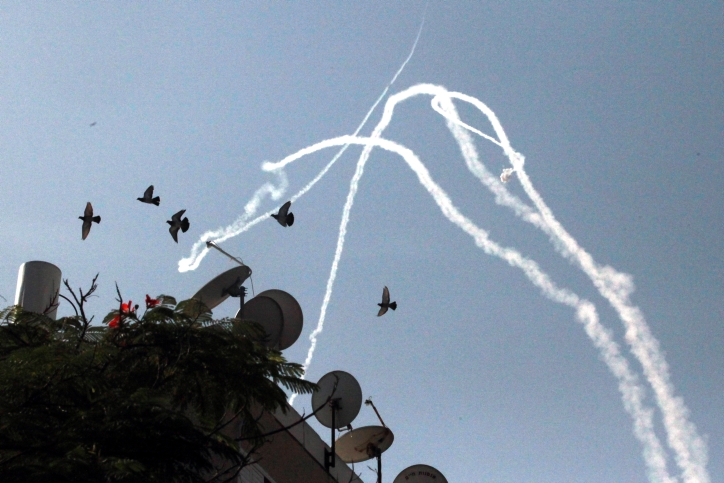 The trails of an Israeli Iron Dome missile after intercepting a rocket launched from Gaza toward the southern Israeli city of Ashkelon, Nov. 18, 2012. (Yossi Zamir/Flash90)
Advertisement

Two of the rockets fired Thursday afternoon were intercepted by Iron Dome and two landed in open areas.

The armed wings of Hamas and Islamic Jihad both claimed responsibility. One of the rockets landed in an area near Jerusalem under the control of the Palestinian Authority.

A warning siren in Jerusalem came in the middle of a briefing by Netanyahu during a Knesset committee meeting on Operation Protective Edge. Netanyahu was taken to a special safe room and the other lawmakers made their way to a bomb shelter. The Knesset building and other government offices shook from the force of the rockets, Israel’s Channel 2 reported.

In less than 24 hours ending Thursday night, more than 120 rockets fired from Gaza struck Israel and an additional 24 were intercepted by the Iron Dome missile defense system, according to the Israel Defense Forces.

Meanwhile, the IDF said Thursday that in the three days of Protective Edge, it has struck more than 900 targets in Gaza, including over 500 rocket launchers and 100 tunnels.

Israel’s defense minister, Moshe Yaalon, said the military has “hit Hamas and the other terrorist organizations in the Gaza Strip very hard.”

“Dozens of terrorists have been killed and we are continuing to strike at Hamas and make it pay a heavy price for everything it has done in recent days,” Yaalon said following a Security Cabinet meeting on Thursday.

Some 80 Palestinians have been killed in Israeli airstrikes, including civilians. After Palestinian sources said women and children, many from the same families, were killed in the strikes, the IDF said in a statement released Thursday that it had targeted a number of private homes in its Gaza strikes because they were being used for military purposes. In many cases, the IDF said, soldiers call the occupants of targeted homes and warn them to evacuate in advance of the hit.

The statement said that Israel has transferred humanitarian supplies and goods into the Gaza Strip, including gasoline and diesel fuel, and food products such as flour, rice, oil and meat.

Since Protective Edge began early Tuesday morning, more than 380 rockets fired from Gaza have struck Israel; an additional 88 were intercepted by Iron Dome.

In southern Israel, a flurry of 20 rockets were fired Thursday night at Beersheba in a minutes-long flurry, setting off alarms in several surrounding communities. Several injuries were reported, a representative of the Hatzalah ambulance corps told Israel’s Channel 2. A house there, as well as in the Shaar Hanegev municipality, sustained direct hits but no injuries were reported.

Also, several people were wounded in rocket attacks on the Eshkol region. One rocket hit a home in Ashdod and several cars caught fire, according to reports.

Also Thursday, the Ministry of Education announced that it would allow high school students in the South who took the national mathematics matriculation exam Thursday under rocket fire to retake the test after they were interrupted several times to go to bomb shelters.