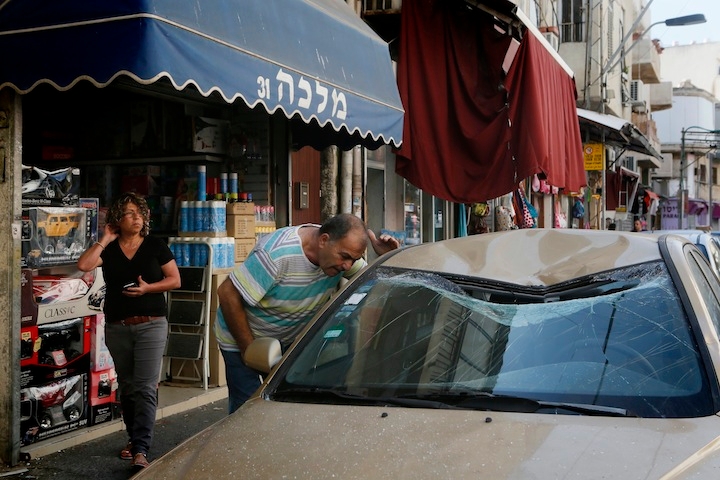 Israelis looking on at the site where remains of one of the rockets fired from Gaza into Israel that was intercepted by the Iron Dome fell in South Tel Aviv. July 10, 2014. (Miriam Alster/FLASH90)
Advertisement

Meanwhile, Israeli airstrikes hit about 320 targets in Gaza overnight on the third day of its expanded military operation to curb rocket fire from the strip. Twenty-seven Palestinians were killed in the strikes, including a family of eight, the Palestinian Maan news agency reported, bringing the overall death toll since the start of Operation Protective Edge to about 80.

More than 750 sites were hit in Gaza in the first 48 hours of the operation, an IDF spokesman said, contradicting a claim made by an anonymous security source in The Jerusalem Post saying that the current bombing campaign already has exceeded the eight-day operation in November 2012. In that operation, approximately 1,450 Gaza targets were hit.

At least two rockets were fired at Tel Aviv during the Thursday morning rush hour. One was intercepted by the Iron Dome missile defense system and a second fell in an open area, according to reports.

Shrapnel from the rockets damaged cars and a gas station in southern Tel Aviv. Hamas took credit for the rockets fired at Tel Aviv. Rockets also were fired at the city later in the morning.

Later in the morning, rockets were fired from Gaza at Dimona, where the Negev Nuclear Research Center and nuclear reactor are housed. One rocket was shot down and one fell in an open area, according to reports. Rockets also fell on the Negev Desert town of Mitzpe Ramon, which is home to the Ramon Crater.

Meanwhile, the armed wing of Fatah, the party of Palestinian Authority President Mahmoud Abbas, also claimed responsibility for firing rockets on Israel, the Times of Israel reported. The announcement was made in a statement on Fatah’s official Facebook page.

An Israeli military spokesman said Wednesday night that since the beginning of Protective Edge, over 360 rockets have been fired at Israel.

Also Thursday, Israel allowed 240 Palestinians with foreign citizenship, including American, to leave Gaza, according to Haaretz.