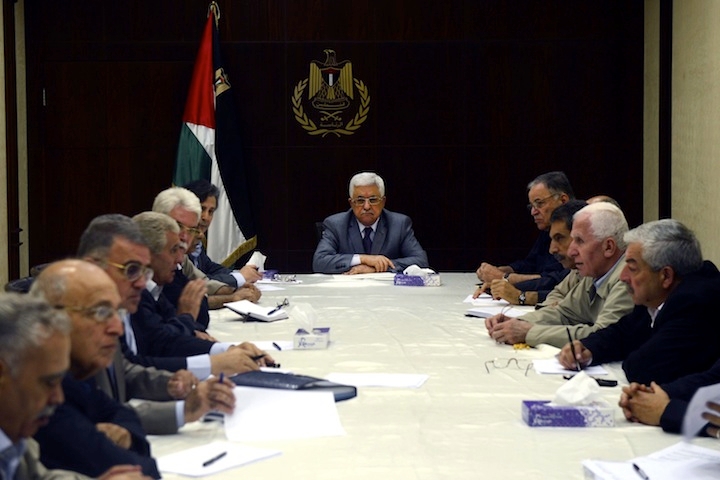 WASHINGTON (JTA) — Mahmoud Abbas has been sitting on the sidelines of the current conflict between Israel and Hamas, with little influence over its outcome.

But it hasn’t stopped U.S. Secretary of State John Kerry from consulting closely with the Palestinian Authority president throughout the crisis.

A U.S. official who advises Kerry on the Israeli-Palestinian peace process said the current conflagration underscores the importance of maintaining and bolstering Abbas as a partner for peacemaking.

“We would like to see the parties return to the talks as soon as possible,” said the U.S. official, who spoke with JTA on condition of anonymity. “We’ve seen what happens in the absence of an active peace process.”

But some observers suggested that Abbas, already weakened by the collapse of the peace process, has suffered a severe blow with the current conflict that may limit his future influence.

“He is one of the biggest political casualties of this whole operation and the question is, once this settles, will we see a mortally wounded Abbas?” asked Ghaith al-Omari, executive director of the American Task Force on Palestine, a Washington-based advocacy group with strong ties to the Palestinian Authority.

The U.S. official, however, focused on the positive role that Abbas has played, hailing his response to Hamas’ campaign of rocket fire against Israel.

“If you look at his statements, he has called for an end to the rocket fire, he has urged Hamas to accept the cease-fire proposal on the table,” the official said. “President Abbas can play a positive role by being clear in public statements that the P.A. does not support what Hamas is doing and likewise condemns the continued rocket attacks.”

Abbas has suggested that rocket fire is counterproductive, telling Palestinian TV on July 10, “What are you trying to achieve by sending rockets? We prefer to fight with wisdom and politics.”

But Abbas also has strongly condemned Israel’s conduct of its Gaza operation. He has accused Israel of “genocide,” called for the United Nations to intervene and protect Palestinians from Israel, and suggested that the Palestinians may apply for membership in additional international agencies.

David Schenker, an expert on Arab politics at the Washington Institute for Near East Policy, said the reason that Israel decided to shut down Israeli-Palestinian peace talks in April still stands: Abbas’ decision to reconcile with Hamas and his readiness to accept a degree of Hamas control in the strip as part of the deal.

“For Netanyahu, it’s reprehensible that you have your peace partner making partnership with a terrorist organization that recognizes the status quo on the ground in Gaza,” Schenker said, referring to Israeli Prime Minister Benjamin Netanyahu.

The U.S. official said the Obama administration had made it clear to Abbas that reconciliation with Hamas was no longer an option — a shift from the initial wait-and-see posture of the United States regarding the effort to establish Palestinian unity.

“We have been clear that we don’t see how reconciliation can move forward under the current situation,” the official said.

Already there are efforts in Congress to cut the approximately $500 million annually that the Palestinian Authority receives from the United States.

Rep. Ed Royce (R-Calif.), chairman of the U.S. House of Representatives Foreign Affairs Committee, told JTA that Abbas would have to end the reconciliation talks with Hamas if it wants to retain U.S. funding.

“A resumption in direct funding to the Palestinian Authority, and whether Abbas is a credible actor, is entirely dependent on the actions that he takes,” he said in an email. “He must definitively end the Hamas relationship with the Palestinian Authority and abandon the unity government. Negotiations must get back on track and the P.A. must comply with both the letter and spirit of U.S. law. Short of taking those steps, I cannot see Congress supporting the resumption of direct assistance to the P.A.”

Al-Omari of the American Task Force on Palestine said that Abbas’ criticism of Hamas could wound him in the Palestinian political sphere.

“He got a lot of criticism, including from within his own party,” al-Omari said. “He took these positions and paid a political price.”

At the same time, al-Omari said, Netanyahu has continued to take a hostile tack toward Abbas and the Palestinian Authority.

“In Israel, we have seen Netanyahu ignoring the P.A. and statements by Netanyahu that undermine the position of the P.A.,” he said, referring to Netanyahu saying last week that the current conflict proves that Israel cannot give up security control of the West Bank.

The longer the current conflict lasts, the harder it will be for Abbas to resist calls to launch a new initiative to seek international recognition for a Palestinian state — a move that will alienate Israel and the United States, al-Omari said.

“The more casualties mount, the more he’s under pressure to go to the United Nations,” al-Omari said. “He is not keen; he understands the damage it will do.”

Schenker said Netanyahu was even less likely in the wake of the Gaza conflict to contemplate the kind of military withdrawal that Abbas would expect in a peace agreement.