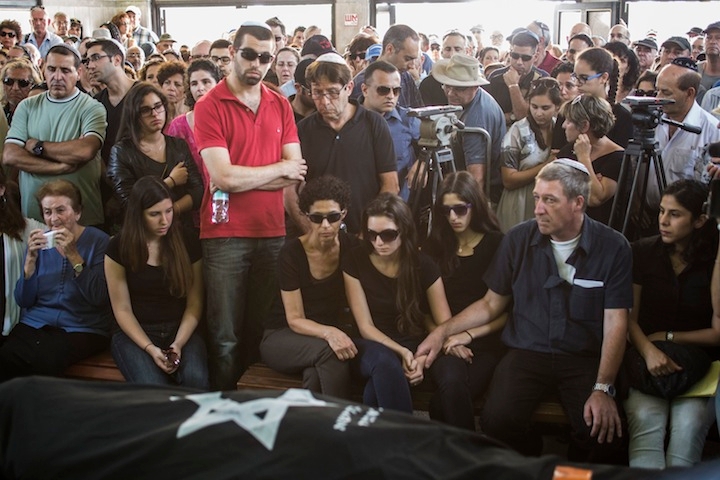 Relatives and family members mourn l in Tel Aviv during the May 27 funeral for Emanuel and Miriam Riva, the Israeli couple killed in the May 24 shooting attack at the Jewish Museum of Belgium in Brussels. (Ilia Yefimovich/Getty Images)
Advertisement

BRUSSELS (JTA) — Attorneys representing the suspected killer of four people in Belgium’s Jewish museum posed for a picture while performing the quenelle gesture, which many believe is an anti-Semitic salute.

Nemmouche, a 29-year-old French national who is believed to have fought with jihadists in Syria, was extradited this week from France to Belgium to face trial for the May 24 murders at the Jewish Museum of Belgium in Brussels. He was arrested on May 30 in the French port city of Marseille during a routine customs inspection, in which he was found to be carrying weapons similar to the ones used in the attack on the museum. He has denied any involvement in the murders.

The undated photo of the lawyers shows them performing the quenelle with the gesture’s inventor, the French comedian Dieudonne M’bala M’bala, who has several conviction for inciting racial hatred against Jews and has written, directed, produced and starred in the 2012 film called “The Antisemite.”

Earlier this year, Manuel Valls, France’s former interior minister, said the quenelle — the act of folding one’s arm over one’s chest while pointing downward with the other arm — was “ an anti-Semitic gesture, an inverted Nazi gesture” which may violate France’s laws against incitement.

Valls, who is now France’s prime minister, made the assertion based on hundreds of photos online of people performing the quenelle at sites connected to the Holocaust or Jews, or while holding a pineapple in an allusion to a joke created by Dieudonne to suggest the Holocaust never happened or to mock it without breaking laws forbidding Holocaust denial. Dieudonne coined the phrase “shoananas” — a mashup of the Hebrew world for the genocide and the French word for pineapple.

Dieudonne — who has often mocked the Holocaust and other murders of Jews — and several of his supporters have argued the quenelle is merely an expression of objection to the establishment, not to Jews.