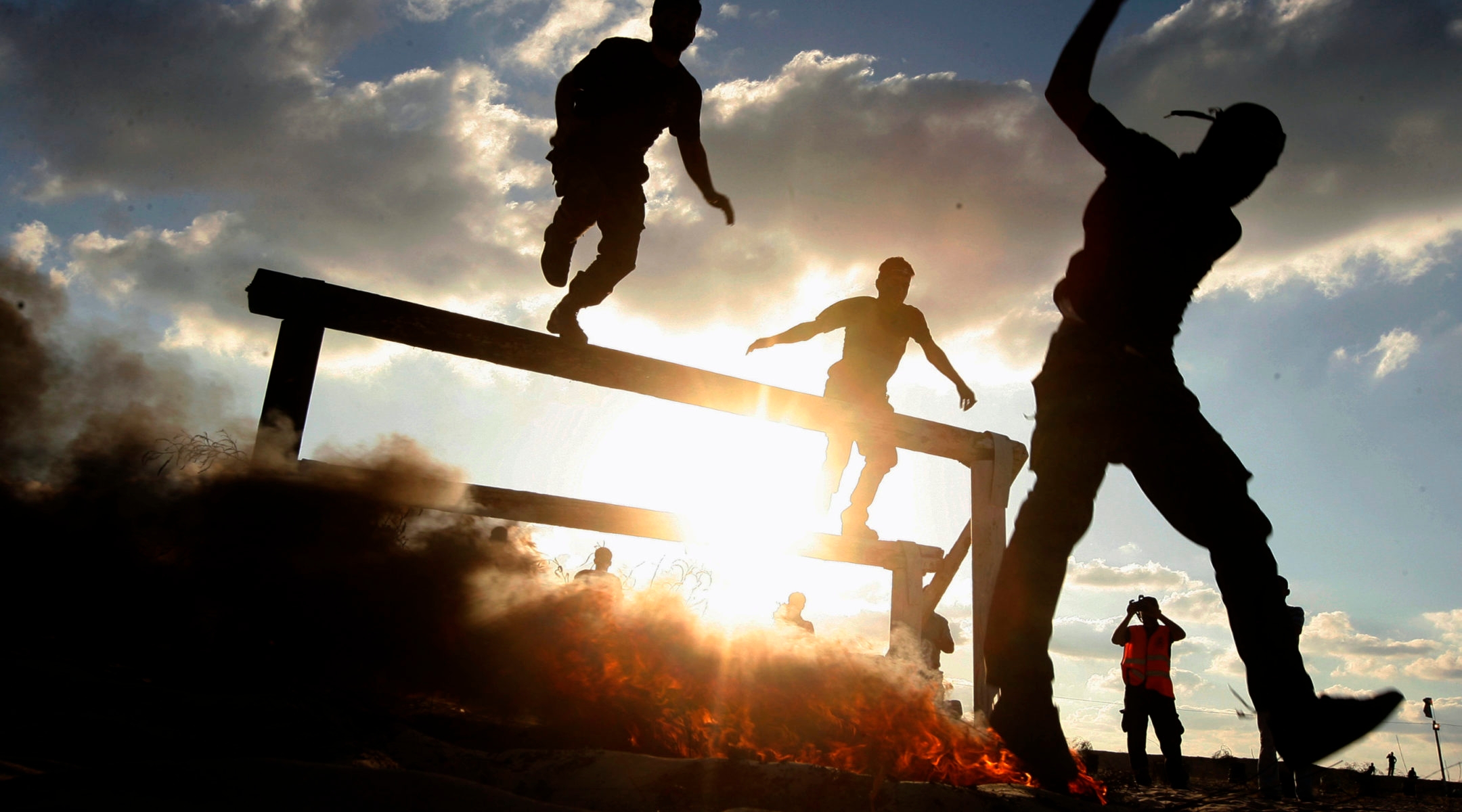 Palestinian militants of Al-Nasser Brigades, the armed wing of the Popular Resistance Committees, show off their skills during their graduation ceremony in Khan Younis in the southern Gaza Strip on Sept. 27, 2013. (Abed Rahim Khatib / Flash90)
Advertisement

After four weeks of a punishing Israel air and ground campaign that left nearly 2,000 dead and much of Gaza in ruins, Hamas has lived to see another day.

For Israel, that might not be the worst thing. That’s because for all of Hamas’ violent extremism, it also governs a territory, maintains a social service wing and controls smaller, more extremist factions. Through mediators, Hamas and Israel have reached agreements in 2011 and 2012, and are negotiating another one now in Cairo.

But many of Hamas’ fellow jihadi travelers in Gaza don’t have the same interests. For most, their sole goal is to fight — not just against Israel, but to spread Islamist rule across the whole world. That’s why, in the thick of the conflict on July 28, outgoing U.S. Defense Intelligence Agency head Lt. Gen. Michael Flynn said that ousting Hamas could bring on “something like ISIS,” the radical Islamist group now conquering swaths of Iraq and Syria.

Who are these groups? Here’s a rundown of the other major organizations in Gaza that seek Israel’s destruction.

Palestinian Islamic Jihad — Sometimes known in Israel simply as Jihad, Palestinian Islamic Jihad is the second-largest militant group in Gaza after Hamas. Founded in 1979 as a break-away from the Egyptian Muslim Brotherhood, Islamic Jihad resembles Hamas in many ways: It’s a Palestinian national movement, it receives funding from Iran and has a small social service wing that includes schools, hospitals and family mediation services, according to The New York Times. It is also party to the negotiations taking place in Cairo.

A 2011 Reuters article estimated the Islamic Jihad’s militia, the Al-Quds Brigade, at 8,000 fighters, compared to tens of thousands of Hamas fighters. Islamic Jihad executed a number of terror attacks during the second intifada a decade ago, including the 2001 abduction and murder of two 14-year-old boys in Gush Etzion. It has frequently fired rockets at Israel from Gaza, including during the three rounds of conflict between Israel and Hamas in recent years.

Popular Resistance Committees — The Popular Resistance Committees, or PRC, is a breakaway from the Palestinian Fatah party that governs the Palestinian Authority in the West Bank. The PRC was founded in 2000 and opposes Fatah’s peace process with Israel. Unlike many groups operating in Gaza, the PRC is not Islamist. In 2012, Yediot Acharonot estimated that it was the third-strongest militia in Gaza and that it receives much of its funding from the Lebanese militant group Hezbollah, which is also backed by Iran.

The PRC also executed terror attacks during the second intifada. In 2006, it collaborated with Hamas on the kidnapping of Gilad Shalit, an Israeli soldier.

Jihadi groups — A number of jihadi groups are reported to be active in Gaza and allied with, or supportive of, the ISIS and al-Qaida agenda of reestablishing an international Islamic caliphate. Among them is the Army of Islam, which participated in the Shalit kidnapping and kidnapped BBC reporter Alan Johnston in 2007.

Another group, Tawhid wal’Jihad, has shot a number of rockets at Israel and gained notoriety for the 2011 kidnapping and murder of Vittorio Arrigoni, an Italian activist with the International Solidarity Movement. Another, Jund Ansar Allah, attempted to attack Israel on horseback in 2009 and declared Gaza an Islamic emirate later that year, leading to a gunfight with Hamas forces.