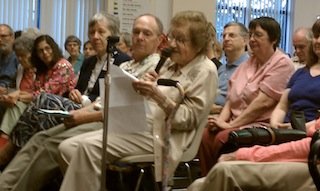 Former Pittsburgh Mayor Sophie Masloff, seated in the audience at ​a 2012 roundtable on Pennsylvania’s voter ID law, reads from a prepared statement opposing the legislation. (Courtesy of The Jewish Chronicle)
Advertisement

NEW YORK (JTA) — Sophie Masloff, the first Jewish mayor of Pittsburgh as well as the first female to lead the city, has died.

Masloff, who guided the southwestern Pennsylvania city from 1988 to 1994, died Sunday at 96.

The Democratic pol was known for her outspokenness and down-to-earth personality. Pittsburgh’s 56th mayor, a lifelong native of the city, described herself as an “old Jewish grandmother,” according to The Associated Press.

Masloff , who had been a City Council member for 12 years, took the post at age 70 when Mayor Richard Caliguiri died in May 1988. The following year she was elected to another four-year term in what the Pittsburgh Post-Gazette described as “one of the hardest-fought mayoral elections ever in Pittsburgh.”

Masloff’s tenure was challenged by economic hardship, the crack cocaine epidemic and a 28-day public transit strike, but she was credited with cutting an unpopular wage tax, launching a residential recycling program and improving signage on the city’s streets.

Her tenure also was marked by a legal battle with the Chabad Hasidic movement over her refusal to display a menorah on the steps of City Hall.

Born Sophie Friedman to Romanian Jewish immigrants, Masloff grew up in a Yiddish-speaking household. Jack Masloff, her husband of more than 50 years, died while she was mayor.

Masloff worked for 30 years as a county court clerk, then was elected to the City Council in 1976, eventually becoming its president.

Describing Masloff’s manner as “unpretentious” and “grandmotherly,” the Post-Gazette said she was “an authentic Pittsburgh celebrity. “

After leaving office, Masloff remained active in city affairs. She was twice honored in City Council proclamations: for her work with the Zionist Organization of America and for community activism in her neighborhood of Squirrel Hill, a heavily Jewish enclave. She also appeared in an advertisement for Bruegger’s Bagel Bakery.