Mom of 4-year-old killed by Gaza mortar grieves: ‘I just cannot come to grips’ with his death 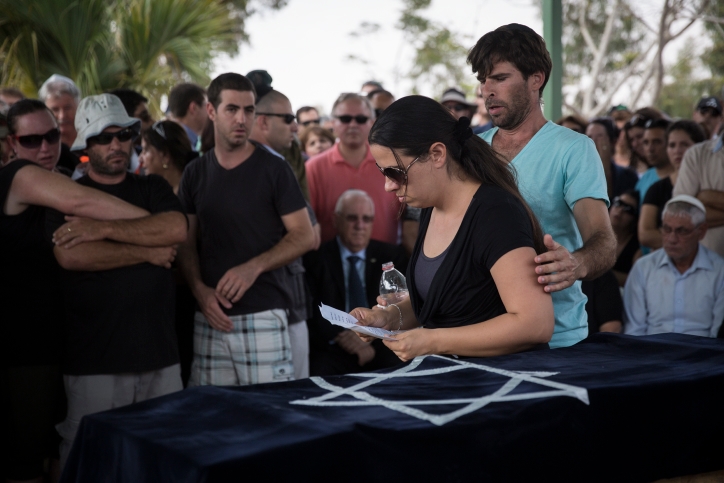 Gila Trigerman is comforted by her husband, Doron, while speaking at the funeral of their 4-year-old son, Daniel, at the Hevel Shalom Cemetery in southern Israel, Aug. 24, 2014. (Hadas Parush/Flash90)
Advertisement

JERUSALEM (JTA) — Hundreds attended the funeral for Daniel Tragerman, the 4-year-old who was killed in a mortar attack outside his home near the Gaza border.

“We were the happiest family in the world, and I just cannot come to grips with it,” Daniel’s mother, Gila Tragerman, said between sobs at the funeral on Sunday morning at a cemetery in the Eshkol Region, near the family home in Kibbutz Nahal Oz.

“We wanted to protect you but even the Code Red siren failed to save you. You would always run first and call your little brother [to the shelter], and then in a second it ended.”

“He was too young to cross the street by himself because it was dangerous, but old enough to know the Code Red siren means because that too is dangerous,” Rivlin told the mourners. “You are everyone’s child. We are burying a child for whose sake we were fighting.”

The Tragerman family reportedly had left their home during the first three weeks of Israel’s operation in Gaza, but returned last week after security officials told residents it would be safe. But rockets began hitting the area again when the cease-fire was broken on Aug. 19.

The family reportedly had planned to leave the kibbutz later on Friday, the day Daniel was killed by shrapnel from the mortar attack.

The Israel Defense Forces said in a statement Sunday that the mortar that killed Daniel was fired from a launching site located adjacent to the Jafar Ali Ibn Taleb School in the neighborhood of Gaza City, which is serving as a shelter for displaced Palestinians.

Meanwhile, the Times of Israel reported that most of the families living in Nahal Oz had left by Saturday, and that most of those remaining were kibbutz employees. A mortar shell scored a direct hit on the kibbutz dining hall on Saturday morning.

Defense Minister Moshe Yaalon said Saturday in a visit to southern Israel that the IDF would provide assistance to civilians leaving the area. He had been scheduled to visit Nahal Oz, but his visit was canceled by his security advisers due to the large number of rockets and mortars that struck the kibbutz over the weekend.