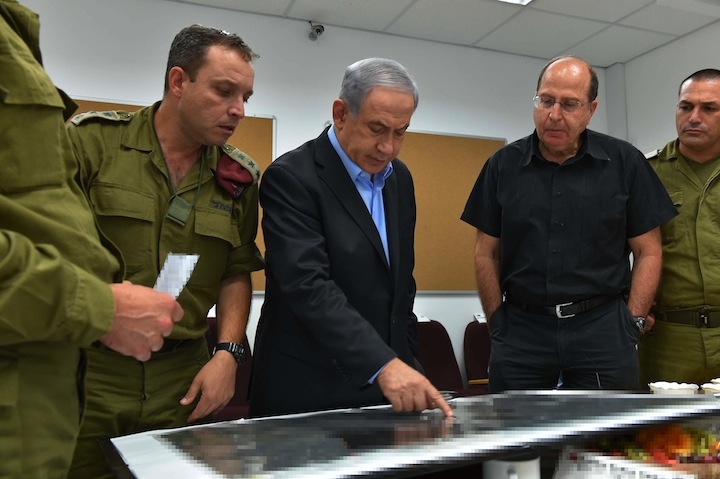 Two weeks later, his approval rating was 55 percent. By this past Monday, on the eve of the cease-fire, it was at 38. A full half of the country disapproved of his performance.

Why the steep drop? Throughout 50 days of conflict, Netanyahu aimed above all to project strength and determination. Over and over, he said he would never compromise the security of Israel.

In July, it seemed, most Israelis believed him. After Hamas either broke or rejected a series of cease-fire proposals, Netanyahu sent ground troops into Gaza to destroy Hamas’ tunnel network — something many Israelis saw as a critical threat to the country. Two days after the July 23 poll showed 82 percent support, Netanyahu rejected Secretary of State John Kerry’s cease-fire attempt, because it did not meet Israel’s core demand to disarm Hamas.

By Aug. 5, when Netanyahu registered the 63 percent rating, Israelis were getting more skeptical. Israel was withdrawing troops from Gaza and entering a three-day cease-fire with Hamas — even negotiating with it (albeit indirectly) in Cairo. Yes, Israeli soldiers were back home and the tunnels were destroyed — but nothing was in place to stop Hamas from firing again.

Hawkish members of Netanyahu’s coalition continued to call for a much stronger Israeli attack on Hamas. Those on the left, meanwhile, wanted Netanyahu to re-engage with Palestinian Authority President Mahmoud Abbas in broader Israeli-Palestinian peace talks. Netanyahu did neither.

And by Aug. 25, when the 38 percent approval rating came out, weeks of negotiations with Hamas had yielded nothing. Meanwhile, rocket fire from Gaza had restarted and a 4-year-old boy from Israel’s embattled South had been killed. Far from acquiescing to demands from right or left, Netanyahu held a press conference to tell them all to be quiet.

Compared to hawks on the right calling for Israel to finish Hamas, and leftists urging Israel to be more daring diplomatically, Netanyahu appeared to some to be indecisive — even ineffective.

This is nothing new. In the first year of his coalition government, months before the war started, Netanyahu’s smaller coalition partners to the right and left had taken the lead on many of the government’s major initiatives. The prime minister, it seemed, was more interested in maintaining the status quo.

If the present calm holds, Netanyahu’s poll numbers may rise again. But politically, this is a particularly bad time for him to be unpopular. His Likud party split with Yisrael Beiteinu in the period leading up to the war and then lost another Knesset seat when an MK, who left to be ambassador to the United Nations Educational Scientific and Cultural Organization (UNESCO), was replaced by a Yisrael Beiteinu MK. Netanyahu’s party now has 19 seats — tying it with the centrist Yesh Atid and making it the smallest ruling party in Israeli history.

The war looks to be over — but Bibi’s fight may have only just begun.