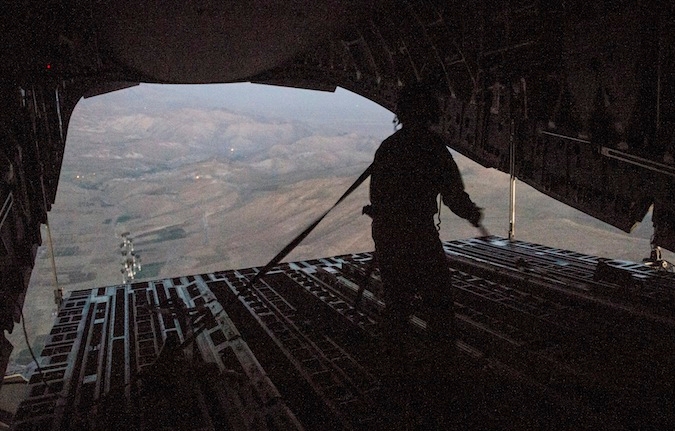 A U.S. soldier drops humanitarian aid bundles over Iraq to provide food aid to thousands of Yazidis under siege by ISIS, the group that has declared an Islamic State in Iraq and Syria, Aug. 9, 2014. (U.S. Air Force via Getty)
Advertisement

(JTA) – Between the war in Gaza and gains by Islamic militants in Iraq, Syria and Libya, there’s plenty of cause these days for pessimism about the Middle East.

But amid all the fighting, there’s also some good news for Israel.

If it wasn’t obvious before, the conflagrations have driven home just how much the old paradigms of the Middle East have faded in an era when the threat of Islamic extremists has become the overarching concern in the Arab world. In this fight against Islamic militancy, many Arab governments find themselves on the same side as Israel.

A generation ago, much of the Middle East was viewed through the prism of the Arab-Israeli conflict. Then, during the Iraq War era of the 2000s, the focus shifted to the Sunni-Shiite divide and the sectarian fighting it spurred. By early 2011, the Arab Spring movement had become the template for the region, generating excitement that repressive autocratic governments might be replaced with fledgling democracies.

Instead, the Arab Spring ushered in bloody civil wars in Syria and Libya, providing openings for violent Islamists. Egypt’s experiment in democracy resulted in an Islamist-led government, prompting a backlash and coup a year ago and the restoration of the old guard.

After witnessing the outcomes of the Arab Spring, the old Arab order appears more determined than ever to keep its grip on power and beat back any challenges, particularly by potent Islamist adversaries.

The confluence of events over the summer demonstrates just how menacingly Arab regimes view militant Islam. A newly declared radical Islamic State, known by the acronym ISIS, made rapid territorial gains in Syria and Iraq, brutally executing opponents and capturing Iraq’s second-largest city. In Libya, Islamic militants overran the Tripoli airport while Egypt and the United Arab Emirates carried out airstrikes against them.

Concerning Gaza, Arab governments (with one notable exception) have been loath to offer support for the Islamists who lead Hamas.

Having briefly experienced a form of Islamist rule with the election and yearlong reign of President Mohamed Morsi, a leader of the Muslim Brotherhood, the pendulum has swung back the other way in Egypt.

The Egypt of President Abdel Fattah al Sisi, who seized power from Morsi, is far more hostile to the Muslim Brotherhood than Hosni Mubarak’s was before the coup that toppled him from the presidency in 2011. Sisi’s Egypt has outlawed the Brotherhood, arrested its leaders and sentenced hundreds of Brotherhood members to death.

The Brotherhood’s pain has been Israel’s gain. During the Morsi era, Egypt’s Sinai Peninsula became a staging ground for attacks against Israel and a conduit for funneling arms to Hamas, a Brotherhood affiliate. But after Sisi took charge, he all but shut down the smuggling tunnels between Egypt and Gaza, clamped down on lawlessness in the Sinai, and ended the discord that had taken hold between Cairo and Jerusalem.

When Hamas and Israel went to war this summer, there was no question about where Cairo stood. For weeks, Egyptian mediators refused to countenance Hamas’ cease-fire demands, presenting only Israel’s proposals. On Egyptian TV, commentators lambasted and mocked Hamas leaders.

With its clandestine airstrikes in Libya over the last few days, Egypt has shown that it is willing to go beyond its borders to fight Islamic militants.

It may be many years before Israel reaches a formal peace agreement with the Arab monarchy that is home to Islam’s two holiest cities, but in practice the interests of the Saudis and Israelis have aligned for years – particularly when it comes to Iran, Hamas and Hezbollah.

Saudi and Israeli leaders are equally concerned about Iran — both are pressing the U.S. administration to take a harder line against Iran’s suspected nuclear weapons program. With Iran’s Shiite leaders the natural rivals of Saudi’s Sunni rulers, the kingdom is concerned that the growing power of Iran threatens Saudi Arabia’s political, economic and religious clout in the region.

Saudi antipathy toward Iran and Shiite hegemony accounts for the kingdom’s hostility toward Hezbollah, the Shiite terrorist group that serves as Iran’s proxy in Lebanon. After Hezbollah launched a cross-border attack that sparked a war with Israel in 2006, Saudi Foreign Minister Saud al-Faisal blamed Hezbollah for the conflict.

Hezbollah’s actions are “unexpected, inappropriate and irresponsible,” Saud said at the time. “These acts will pull the whole region back to years ago, and we simply cannot accept them.”

“Hamas is responsible for the slaughter in the Gaza Strip following its bad decisions in the past, and the haughtiness it shows by firing useless rockets at Israel, which contribute nothing to the Palestinian interest,” Saud told the London-based pan-Arab newspaper A-Sharq Al-Awsat. 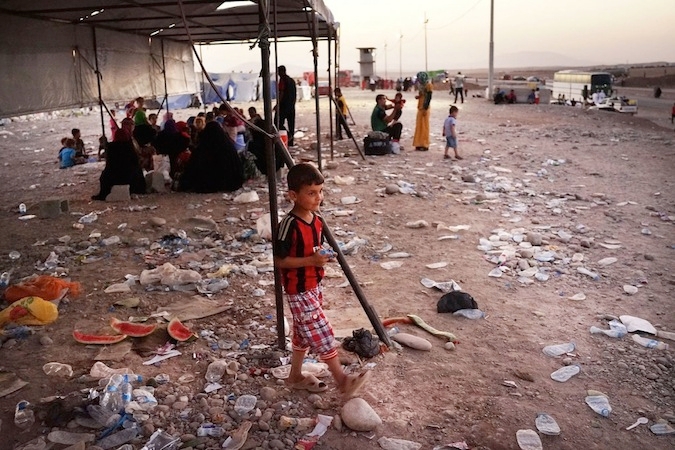 Iraqi families who fled ISIS fighters near the Iraqi city of Mosul prepare to sleep on the ground near the Khazair temporary displacement camp in a Kurdish-controlled part of Iraq, July 3, 2014. (Spencer Platt/Getty)

Saudi rulers oppose Hamas because they view it as an affiliate of the Muslim Brotherhood, which they believe wants to topple Arab governments. Likewise, when ISIS declared earlier this summer that it had established an Islamic caliphate, al-Faisal called ISIS “a danger to the whole area and, I think, to the rest of the world.”

The Wahabbis who rule Saudi Arabia may be religiously conservative, but they’re not so extreme as to promote overtly the violent export of their fundamentalist brand of Islam through war, jihad and terrorism.

Of course, just because their interests are aligned doesn’t mean the Saudis love Israel. The Saudi ambassador to Britain, Prince Nawaf Al-Saud, wrote during the Gaza war that Israeli Prime Minister Benjamin Netanyahu “will answer for his crimes before a higher authority than here on earth.”

But common foes increasingly are bringing Saudi and Israeli interests together.

At first glance, Qatar may seem like a benign, oil-rich emirate of 2 million people living in relative peace, spending heavily on its media network, Al Jazeera, and planning to wow the world with construction for the 2022 World Cup.

But Qatar is also a major sponsor of Islamic extremism and terrorism. The country funnels money and weapons to Hamas, to Islamic militants in Libya and, according to Ron Prosor, Israel’s ambassador to the United Nations, to groups in Syria affiliated with al-Qaida.

In an Op-Ed column in Monday’s New York Times, Prosor disparaged Qatar, which is home to Hamas leader Khaled Mashal and serves as a base for Taliban leaders, as a “Club Med for Terrorists.”

“Qatar has spared no cost to dress up its country as a liberal, progressive society, yet at its core, the micro monarchy is aggressively financing radical Islamist movements,” Prosor wrote. “Qatar is not a part of the solution but a significant part of the problem.”

When the uprising against Syrian dictator Bashar Assad began, champions of democracy cheered the revolution as yet another positive sign of the Arab Spring. It took a while, but the Obama administration eventually joined the chorus calling for the end of the Assad regime.

In Israel, officials were more circumspect, fretting about what might come next in a country that despite its hostility had kept its border with Israel quiet for nearly four decades.

Three years on, the conflict in Syria is no longer seen as one of freedom fighters vs. a ruthless tyrant. Assad’s opponents include an array of groups, the most powerful among them Islamic militants who have carved out pieces of Syrian territory to create their Islamic State.

Now the Obama administration is considering airstrikes to limit the Islamists’ gains — and trying to figure out if there’s a way to do so without strengthening Assad’s hand.

For Israel, which has stayed on the sidelines of the Syrian conflict, the prospect of a weakened but still breathing Assad regime seems a better alternative than a failed state with ISIS on the march.

Where is the Islamic Republic in all this? Compared to the newest bad boy on the block, this one-time member of the “axis of evil” looks downright moderate.

Iran is negotiating with the United States over its nuclear program, and both view ISIS as a foe and threat to the Iraqi government (which Iran backs as a Shiite ally).

Last week, State Department deputy spokeswoman Marie Harf indicated that the United States may be open to cooperation with Iran in the fight against ISIS, which is also known by the acronym ISIL.

“If they are interested in playing a constructive role in helping to degrade ISIL’s capabilities, then I’m sure we can have that conversation then,” Harf said.

Whether working with Iran is good or bad for Israel depends on one’s view of the Iranian nuclear negotiations.

If you think the talks have a realistic chance of resolving the nuclear standoff with Iran diplomatically, the convergence of U.S.-Iran interests may ultimately serve the goal of addressing this existential threat to Israel. If you think Iran is merely using the negotiations as a stalling tactic to exploit eased sanctions while it continues to build its nuclear project, then Iran-U.S. detente may distract from the larger issue.

Where all this turmoil will leave the region is anyone’s guess. One thing is certain, as made clear by the U.S. decision to intervene against ISIS: Ignoring what’s happening in the Middle East is not an option.