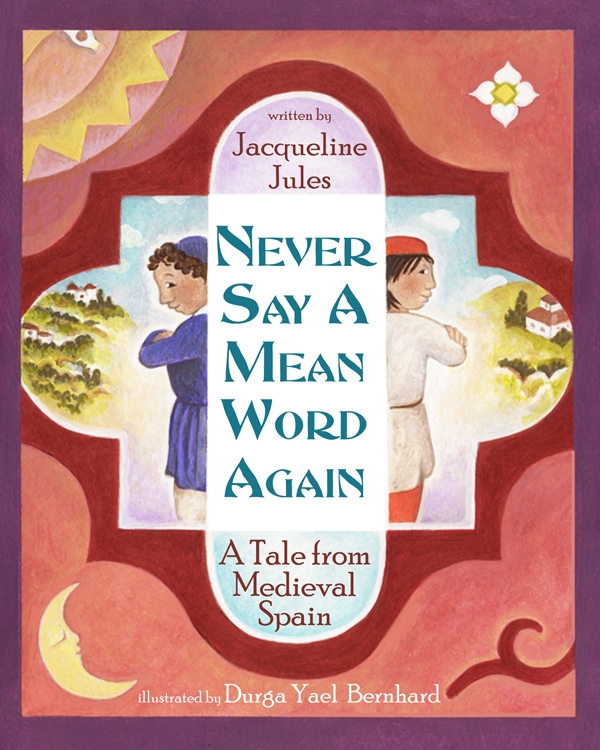 BOSTON (JTA) — Fourteen years ago, sitting in her synagogue during Saturday morning services, Jacqueline Jules was browsing some Torah commentary when a story about a medieval poet struck an inspirational chord.

“It was an ‘aha’ moment. This will be my next writing project, my next children’s book,” recalled Jules, an award-winning children’s writer who at the time was also working as a school librarian.

The historical note that captured her imagination was a reference to Samuel HaNagid, a Jewish Talmudic scholar who in the early 11th century served as vizier, the highest adviser, to the Muslim royal court in Granada.

According to the legend, HaNagid is said to have made friends with a man who cursed him “by tearing out his angry tongue and giving him a kind one.”

“I was smitten by the story,” said Jules, adding that she saw the tale as a powerful metaphor for turning a violent act into an act of kindness.

Over the next dozen years, Jules discovered that turning the tale into a story for children was challenging. The author of “What a Way to Start a New Year!,” about Rosh Hashanah, and “The Hardest Word: a Yom Kippur Story” told JTA that she wrote as many as 20 versions of the tale.

In “Never Say a Mean Word Again: A Tale from Medieval Spain” (Wisdom Tales, 32 pp, $16.95, ages 4-8), illustrated by Durga Yael Bernhard, Jules has reimagined the tale into one about two young boys.

It is among several new children’s books available for the High Holidays season.

The themes in the Jules book of forgiveness and starting anew resonate with those emphasized during Rosh Hashanah, the two-day Jewish New Year that begins this year at sundown on Sept. 24, and Yom Kippur, the Day of Atonement, which starts at sundown on Oct. 3.

“Never Say a Mean Word Again” is a simple yet lyrically told story that has garnered a starred review from Publisher’s Weekly.

In the opening pages of the book, set in medieval Spain, the young Samuel, an innocent, head-in-the-clouds fellow who is the son of the vizier, has one accidental encounter after another with Hamza, the tax collector’s quick-witted son. Hamza refuses to accept Samuel’s apologies and taunts him with cruel names like “Donkey brain! and Stupid!”

Samuel’s father refuses to punish Hamza. Instead, he gives his son a broad directive: “Make sure Hamza never says a mean word to you again.”

As Samuel tries to exact a stern lesson on Hamza, the story takes a surprising turn and misunderstandings give way to an emerging friendship.

Bernhard’s simple yet expressive illustrations evoke the colors, landscape, architecture and patterns of the era. One full-page illustration depicts Samuel’s imagined scheme of a monkey perched on a stone wall while clamping Hamza’s lips.

The book explores tough questions, Jules says, such as what constitutes fair punishment and how do you get someone to stop calling you names.

“I hope the book gives young readers and the adults in their lives much to think about and discuss,” she wrote in an email.

Here are some other new High Holidays titles for children:

Katy, an eager, bubbly young girl, is counting down the days until she goes apple picking with her mother — a yearly family tradition at Rosh Hashanah. They will peel, chop and cook the apples with cinnamon and sugar to make applesauce for her favorite holiday.

This year Katy is especially excited, she tells her classmates, because she is also expecting a new baby cousin. She also spreads the word to other friends, as well as her neighbors, shopkeepers and rabbi.

But when the new baby arrives early and Katy’s mom has to leave town, the girl’s disappointment is palpable. With the help of her dad and a surprise from her friends, teachers and rabbi, Katy rises to the challenge.

Shira is a spirited young girl who wants to participate in Yom Kippur, a day she learns is the holiest of the Jewish year. But Shira is not content to sit back and observe the grown-ups as they pray, mostly in Hebrew, through the long religious service. She wants to have her prayers count, but she worries that she does not know how to read Hebrew.

At the blowing of the shofar, Shira becomes inspired to do something, surprising the rabbi and the congregation with her own heartfelt prayer. Taylor’s cartoon-like illustrations are colorful and animated.

This is one of a series of Shira books written by Sabbag, who was born and raised in Israel but now lives in Atlanta, where she’s been a teacher at a Jewish day school. The Shira character, Sabbag writes on her website, is a composite of many of her students over the years and reflects her desire to convey the joy children experience in Jewish ritual and spirituality.

This sensitive story is told from the perspective of Rochel, a 5-year-old girl from a haredi Orthodox family whose parents are divorced. She and her younger brother live with their mother; their father lives in a different house. The story traces the challenges facing Rochel as her family celebrates Shabbat and holidays, including Sukkot.

Rochel is a believable, authentic character whose emotions, including sadness and anxiety, are universal. She is reassured by her mother’s message that the divorce is not her fault and God, referred to as Hashem, loves all children. Klein deserves high marks for writing honestly and authentically about a subject not often dealt with in children’s books for haredi Orthodox families.