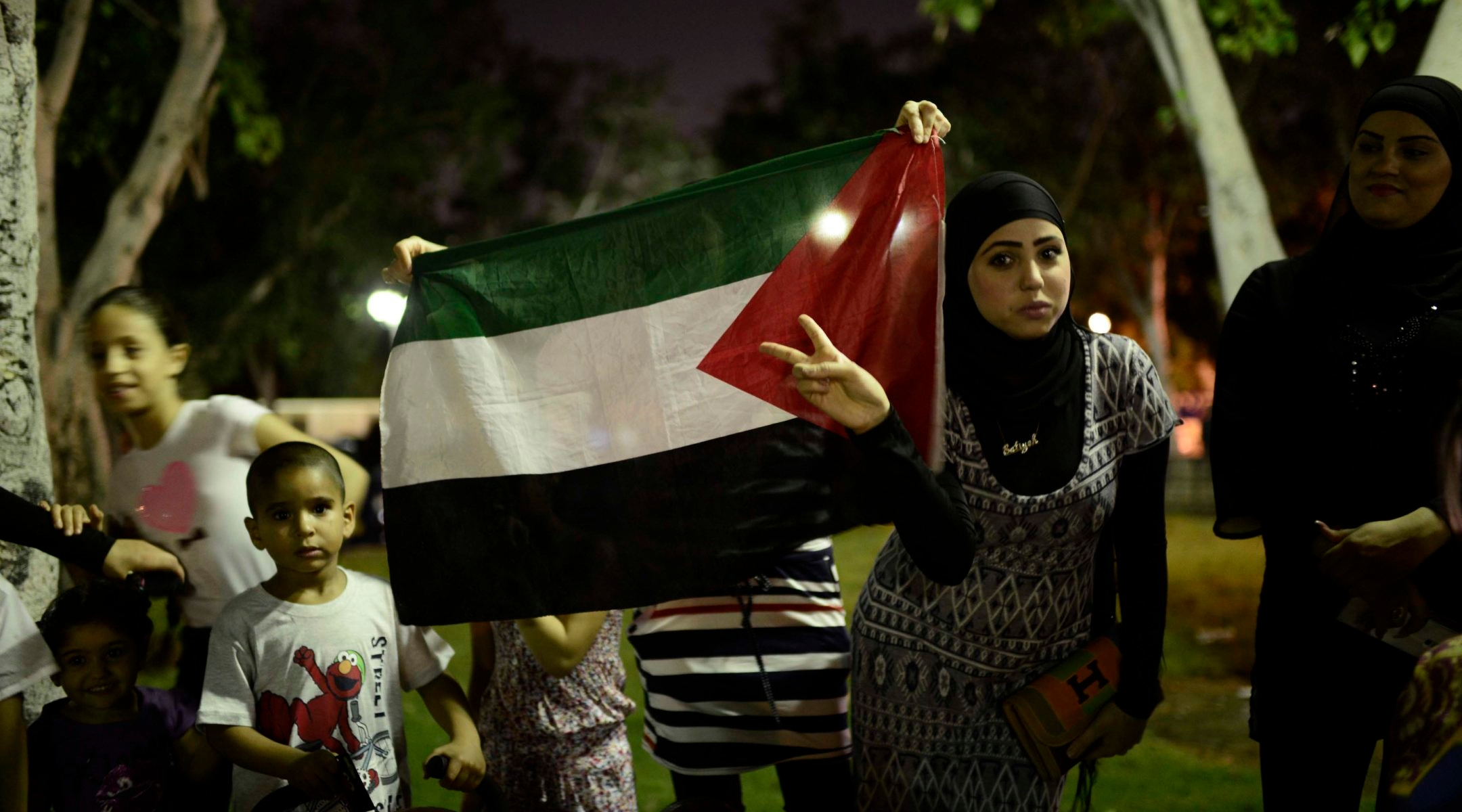 Israeli Arabs take part in a protest in the central Israeli city of Jaffa, near Tel Aviv, against Israel's offensive in the Gaza Strip, July 21, 2014. (Tomer Neuberg/FLASH90)
Advertisement

BEERSHEBA, Israel (JTA) — Handcuffed to a wooden chair in the middle of the night, Rafat Awaysha still wasn’t sure what crime he had committed. He had announced a demonstration against the war in Gaza in a July 11 Facebook post. Soon afterward, he received a call from the police, who came to his dormitory and took him in for questioning.

Released after an hour, Awaysha, the head of the Arab-Israeli Balad party student group at Ben-Gurion University in Beersheba, thought the ordeal was over. But at 3 p.m. the police returned.

“You have the right to express yourself in a democratic process,” Awaysha, 20, said. “You don’t need to be in an interrogation for 12 hours for participating in a protest.”

Awaysha was one of approximately 1,500 Arab-Israelis arrested for involvement in protests against Israel’s operation in Gaza, according to NGOs and Israeli media reports. Mossawa, a nongovernmental organization that advocates for the equal treatment of Israel’s Arab minority, said that at least 70 Israeli Arabs were illegally fired, reprimanded or suspended from work for publicly opposing the war.

Reached by JTA, a police spokesman confirmed the total number of arrests but would not confirm or deny Awaysha’s account.

Arab-Israeli opposition to the recent conflict, which ended with a late August truce, brought the predicament of Israel’s 1.7 million Arabs into stark relief.

Community activists advocating for Arab-Israeli advancement and civil liberties say that most Arab-Israelis — even those  seeking to integrate better into Israeli society — opposed Israel’s Gaza operation because of the grave risk it posed to Palestinians there. An Aug. 11-12 poll by the Israel Democracy Institute think tank found that 62 percent of Israel’s Arabs opposed the war, as opposed to 24 percent who said they supported it.

A speaker at an Arab-Israeli protest in Jaffa against Israel’s military operation in the Gaza Strip, July 24, 2014. (Danielle Shitrit/Flash90)

Arab-Israelis “are not being patriotic enough for the Israelis, but at the same time they are called traitors by their own people because they are not joining the struggle against Israel,” Thabet Abu Rass, co-executive director of the Abraham Fund Initiatives, which promotes Arab-Jewish coexistence, explained one day after the conflict.

Throughout the war, Israeli-Arabs faced discrimination from the streets, where Jewish protesters chanted “Death to Arabs,” and from the halls of Knesset: Foreign Minister Avigdor Liberman called for a boycott of businesses owned by Arab-Israelis who participated in a one-day strike to oppose the war. Some Knesset members called for Balad lawmaker Hanin Zoabi, who was suspended from parliamentary activity for six months, to be punished even more harshly for several statements they called inflammatory. And last month, some right-wing Knesset members proposed a bill to demote Arabic from being an official language of Israel.

Following the poll’s release, survey author Tamar Herman said, “Instead of focusing on citizenship and Israeliness, [Jewish-Israelis] find it easier and more convenient to focus more on their Jewishness.”

Sayed Kashua, a well-regarded Arab-Israeli Hebrew-language writer, made news this summer when he decided to move from Israel to Illinois. Kashua wrote about the transition in a Guardian Op-Ed titled “Why I have to leave Israel,”describing his fears for his family.

“After my last columns some readers beseeched that I be exiled to Gaza, threatened to break my legs, to kidnap my children,” he wrote. “I live in Jerusalem, and I have some wonderful Jewish neighbours, and friends, but I still cannot take my children to day camps or to parks with their Jewish friends. My daughter protested furiously and said no one would know she is an Arab because of her perfect Hebrew but I would not listen. She shut herself in her room and wept.”

Rafat Ayasha, 20, was one of approximately 1,500 Arab-Israelis arrested for involvement in protests against Israel’s operation in Gaza. (Ben Sales/JTA)

For Arab-Israelis, the climate of fear and animosity had intensified even before the most recent conflict in Gaza. Earlier this year, a spate of so-called “price tag” attacks targeted their communities. Perpetrated by Jewish-Israeli right-wing extremists in response to perceived anti-settlement policies, the attacks ranged from graffiti on mosques and businesses to tires slashed on Arab-owned cars.

Tensions spiked when Jewish extremists kidnapped and burned alive a Palestinian teen, Mohammed Abu Khdeir, on July 2 in a revenge attack following the kidnapping and murder of three Israeli teens in June. Outraged by the incident, Arab-Israelis gathered in mass protests in Jerusalem and northern Israel. Demonstrators blocked roads and burned tires, and vandals damaged Jerusalem light rail stations in the eastern part of the city. Demonstrations continued across Israel throughout the war.

Thousands of Jewish-Israelis, it should be noted, protested alongside their Arab counterparts during the war — and a handful of those Jewish demonstrators were arrested.

“More and more young people feel the democratic methods of struggle adopted by the political leaders of the Arab community haven’t been effective,” said Jafar Farah, Mossawa’s director. “More and more people will take the risk of using illegal methods,” such as riots and violence against property.

Following a demonstration by Arab-Israelis last week celebrating the Palestinians “Gaza victory,” Liberman said Israel should treat the demonstrators “as traitors and supporters of a terror organization, to put them to justice and to give them the ‘right’ to stand for a moment of silence, as they did during the demonstration, in jail cells.”

Biotechnology student Alaa Taha, 25, lost her job monitoring quality control at a plastics factory shortly after she was arrested at a protest on July 18. Her managers said they were firing her for an error committed months ago, Taha said, but she doubts that story. To boot, she said she still hasn’t received her the final paycheck or a letter of termination that would allow her to receive unemployment benefits.

“I don’t know what to say, but this is racism,” she said. “I went to a protest. I didn’t do anything. We just yelled and that’s it. This is a democratic state. Where’s the democracy?”

Ron Gerlitz, co-executive director of Sikkuy, an Israeli NGO that aims to advance equality for Arab-Israelis, sees a tug of war between democratic forces and anti-democratic forces.

“The democratic forces are now fighting back against the attacks against the Arabs,” he said. “Will they succeed in that struggle? I don’t know. The public has gotten to such difficult places that I hope it says it can’t be silent.”

Awaysha said that during his police interrogation, he was asked why his Facebook post called for violence (it didn’t, he said). After he was handcuffed to the chair, he said, an officer from Israel’s Shin Bet security service began to question him. When Awaysha tried to fall asleep in the chair after the interrogation, he recalled the police officer saying, “This isn’t a hostel.”

He was released in the early morning — and given a week of house arrest.

“They started saying, ‘We know where your father works, where your mother works, we know you’re a student,’” related Awaysha, a political science student who also was arrested last year for protesting a government plan to relocate Negev Bedouins. “They asked me to work with them. They didn’t get what they wanted.”