Shofar so good: The Jews who inspired us in 5774

A pile of shofars for sale in Jerusalem. (Shutterstock)
Advertisement 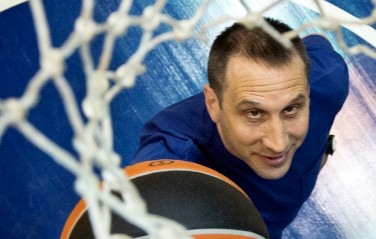 After guiding Maccabi Tel Aviv to a European championship, David Blatt has moved on to the NBA’s Cleveland Cavaliers and will coach megastar LeBron James. (Moshe Shai/FLASH90)

NEW YORK (JTA) – In a year with no shortage of bad news, these 10 Jewish individuals or groups inspired or impressed us in 5774.

David Blatt, for leading underdog Maccabi Tel Aviv to the Euroleague title and weeks later nabbing the head coaching post of the NBA’s Cleveland Cavaliers. Blatt played for an Israeli kibbutz team in 1979 after his sophomore year at Princeton, competed for the U.S. team that won the gold medal in the 1981 Maccabiah Games and played nearly a decade of professional basketball in Israel. Think the decision by superstar LeBron James to return to Cleveland has anything to do with Blatt’s hire?

Gregg Roman, for working frantically to keep Jewish journalist Steven Sotloff’s Jewish and Israeli identities secret after news broke that ISIS, the radical Islamic group in Iraq and Syria, was holding him hostage. The director of the Community Relations Council at the Jewish federation in Pittsburgh, Roman knew Sotloff from time spent in Israel, and Roman spent two weeks scrubbing the Internet of any references to Sotloff’s religion or Israeli citizenship. Ultimately it didn’t make a difference: Sotloff was beheaded by ISIS, and the murder helped fuel the U.S. decision to widen its airstrikes against the Islamic group.

Eight-year-old Samuel Sommers, a.k.a. Superman Sam, for inspiring thousands of people during his struggle with leukemia, as documented by his parents Rabbi Phyllis and Michael Sommers on their blog, Superman Sam. Not long After Sam died in December, 73 rabbis shaved their heads to raise $600,000 for pediatric cancer research.

Second Lt. Eitan, an Israeli soldier, for risking his life and rushing into a Gaza tunnel to pursue Hamas attackers after they snatched IDF Lt. Hadar Goldin during the fighting in Gaza. Eitan, whose last name was not publicly disclosed, was hailed as a hero in Israel for averting a kidnapping situation like that of Gilad Shalit by grabbing enough evidence during his chase to verify that Goldin had been killed in action.

Mark Zuckerberg, for being the top U.S. charitable giver in 2013. Last December, the Facebook founder and wife Priscilla Chan gave 18 million shares of Facebook stock, valued at more than $970 million, to the Silicon Valley Community Foundation. It’s not a Jewish charity, but charity is a Jewish value.

Alice Herz-Sommer, the 110-year-old Holocaust survivor and concert pianist, for wowing us with her achievements. A week after her death in February, a documentary about Herz-Sommer’s life, “The Lady in Number 6: Music Saved My Life,” won the Academy Award for best short documentary.

Janet Yellen, who just may be the most influential woman in America, her every utterance parsed with Talmudic scrutiny. As chair of the U.S. Federal Reserve, Yellen is responsible for making sure the U.S. economy stays strong even as Europe teeters on the verge of another recession. She’s the fifth Jew to lead America’s central bank but the first woman.

Michael Bloomberg, the ex-mayor of New York City, for his good works. Bloomberg, who reportedly is worth $32.8 billion, decided to use the $1 million Genesis Prize he was awarded to create 10 $100,000 grants to seed innovative projects guided by Jewish values that seek to address the world’s pressing issues. This summer, when the Federal Aviation Administration announced a ban on flights to Tel Aviv during Hamas’ rocket attacks on Israel, Bloomberg jumped on an El Al flight to demonstrate the safety of flying to Israel and pressure the U.S. government to lift its ban. Israelis are still talking about this gesture — and not just because Bloomberg chose El Al over his own $24 million private jet.

Arieh Warshel, Michael Levitt and Martin Karplus, for winning the Nobel Prize in chemistry. The three, two of whom are Israeli, shared the prize for their “development of multiscale models for complex chemical systems.”

French Jewry, for holding it together during trying times. When gangs of marauding Arabs set upon a Paris synagogue during Gaza-related rioting, French Jews stood strong, battling the assailants until backup arrived. Faced with rising anti-Semitism epitomized by the popularity of the quenelle — a gesture with echoes of the Nazis’ Sieg Heil — French Jews seem to think things will get worse. French Jewry is now the world’s No. 1 source of immigrants to Israel.