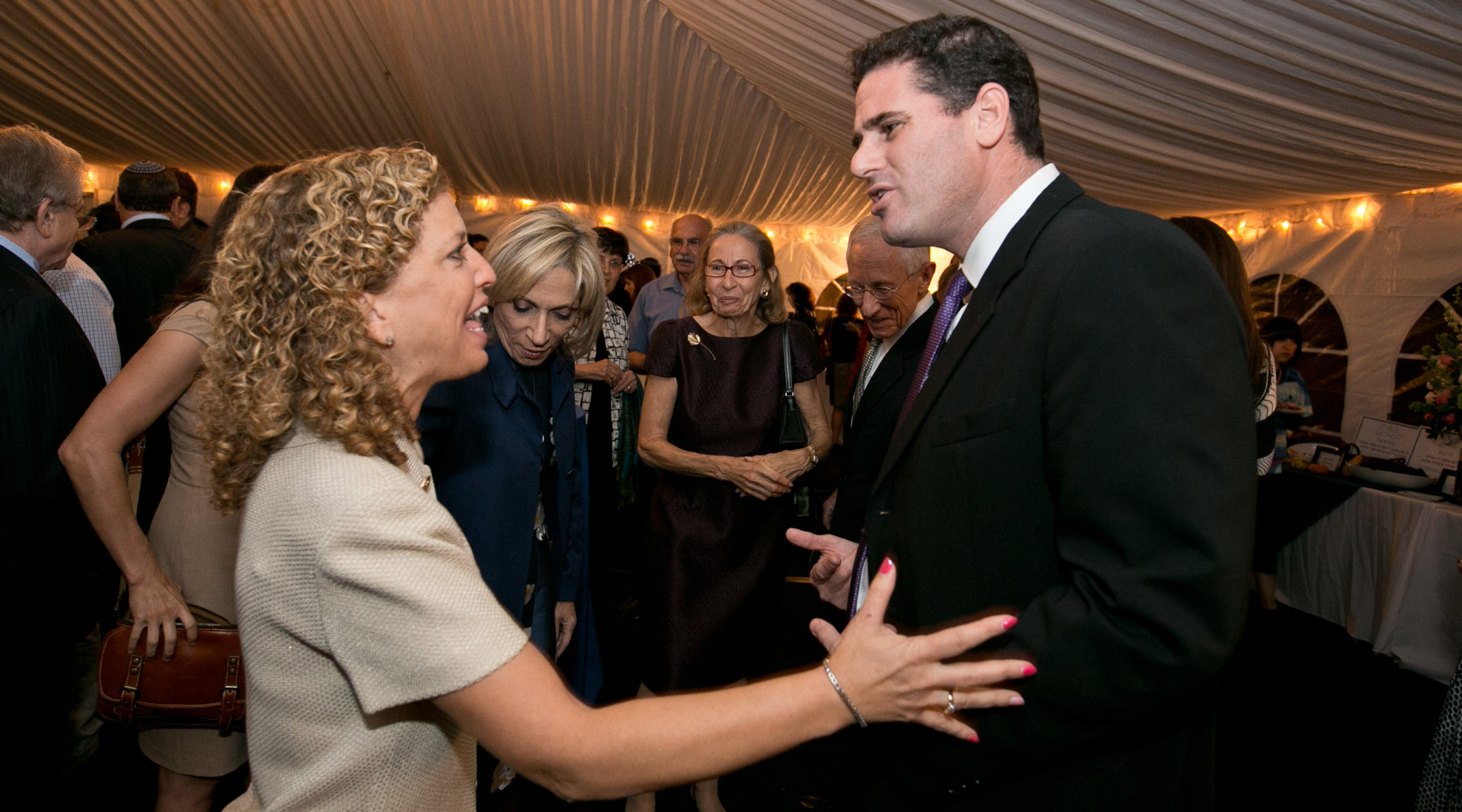 WASHINGTON (JTA) — Saying a nuclear Iran would be a “thousand times” greater threat to the world than ISIS, Israel’s ambassador to the United States warned against including Iran in any coalition to derail the jihadist group.

Ron Dermer, speaking Sept. 17 to guests at a pre-Rosh Hashanah reception at his residence in suburban Maryland, also cautioned the U.S. against accommodating Iran during the current effort to degrade ISIS.

His urgent tone was the latest sign of a split between the Obama and Netanyahu governments over how to deal with Iran’s role in stopping ISIS, which is seizing swaths of Iraq and Syria.

The United States on Tuesday launched strikes for against ISIS in Syria, joined by a coalition of four Arab nations.

“I made clear that as part of this campaign the United States would take action against targets in both Iraq and Syria so that these terrorists can’t find safe haven anywhere,” President Obama said at the White House before leaving for New York to participate in the United Nations General Assembly. “I also made clear that America would act as part of a broad coalition. And that’s exactly what we’ve done.”

Dermer at his talk last week noted the presence of Obama administration officials at the event and praised the American president for leading a coalition to defeat the terror group. He said, however, that Iran must not be a partner in this effort.

Iran has assisted the Iraqi and Syrian governments, and U.S. Secretary of State John Kerry has said that Iran and the United States should communicate — but not coordinate — their respective efforts in the battle against ISIS.

Kerry said last week that such communication could take place on the sidelines of nuclear talks currently underway between the major world powers and Iran. The Iranians have resisted such overtures, apparently holding out for an elevated level of cooperation.

Israeli officials have said that any cooperation with Iran would be counterproductive.

“The [nuclear] talks are going in the wrong direction,” Yuval Steinitz, Israel’s intelligence minister, said in a statement Sept. 17 emailed to reporters. “We support the coalition against ISIS and terrorist organizations, but this should not come at the expense of a nuclear Iran.”

No U.S. official has said that Iranian cooperation on ISIS would influence the outcome of nuclear talks.

Just last week Wendy Sherman, the undersecretary of state leading talks with Iran, suggested in a speech that the United States remained as committed to keeping Iran from acquiring nuclear weapons as it was in confronting ISIS.

“Defeating violent extremists” in Iraq and Syria “and ending Syria’s civil war are two crucial elements to the construction of a stable and forward-looking Middle East,” Sherman said Sept. 16 in a talk at Georgetown University.

Sherman, who is now in New York attending the Iran nuclear talks on the sidelines of the U.N. General Assembly, added: “Ensuring the wholly peaceful nature of Iran’s nuclear program is a third — not necessarily in any priority order.”

The American Israel Public Affairs Committee, like Israeli officials, backed the strikes but said that Iran remains the preeminent threat.

“AIPAC supports a strong American response to the Islamic State’s terrorism,” an official of the lobby said Tuesday in a statement to JTA. “At the same time, we believe the greatest threat to America’s security and that of our allies is a nuclear-armed Iran.”

The Anti-Defamation League has been unalloyed in its support for the strikes.

“In President Obama’s announcement of a wider campaign to stop the growing threat from ISIS, he set down a marker to all terrorist organizations: Threaten the United States, and the United States will take action,” the ADL said Sept. 11, the day after Obama first announced that h was planning air strikes. “While this operation will be complex and difficult, U.S. leadership in countering this force for terror and instability is essential.”

Kerry met last week with Avigdor Liberman, Israel’s foreign minister, who in a statement also warned against accommodation with Iran, which he called “the No. 1 exporter of terror in the world.” Liberman did not, however, suggest that Iran was the greater threat and instead said the ISIS and Iran crises were interrelated.

An Israeli Foreign Ministry statement said Liberman told Kerry that “Israel supports the United States in its efforts to form a broad international front against ISIS, and stands ready to help in this task should it be asked, taking into consideration the sensitivities of the states taking part and the needs of the United States.”

Obama administration officials say that should the major powers and Iran reach an agreement regarding its nuclear program by the Nov. 24 deadline, the pact would likely allow some uranium enrichment — an outcome Israel is working hard to mitigate.

Liberman said that in his meeting with Kerry, he also lobbied his U.S. counterpart to moderate State Department warnings against travel to Israel now that Israel and Hamas have achieved a cease-fire agreement following this summer’s war.

The most recent warning, issued earlier this month, warns of the “risks” of traveling to the region “due to the complex security environment there and the potential for violence and renewed hostilities.”