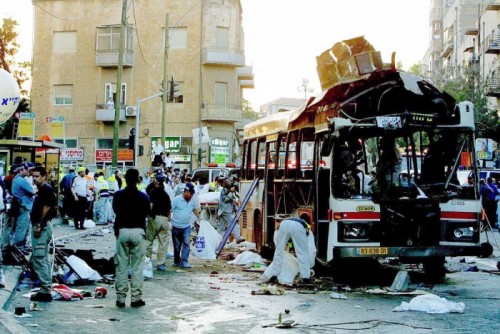 A New York jury on Sept. 22, 2014 found Arab Bank liable for this Hamas suicide bombing in Jerusalem on June 11, 2003, which killed 16 people, because the bank knowingly processed "martyr payments" to the families of suicide bombers. (Quique Kierszenbaum/Getty Images)
Advertisement

A New York jury on Sept. 22, 2014 found Arab Bank liable for this Hamas suicide bombing in Jerusalem on June 11, 2003, which killed 16 people, because the bank knowingly processed “martyr payments” to the families of suicide bombers. (Quique Kierszenbaum/Getty Images)

According to the U.S. District Court ruling on Monday, the Jordan-based bank provided material support to Hamas — backing that helped facilitate 24 terror attacks between 2001 and 2004.

The case was brought by nearly 300 U.S. citizens who had been injured or lost family members in the attacks, which took place during the second intifada.

It was the first civil case against a bank to be tried under the Anti-Terrorism Act of 1991, which allows victims of foreign terror attacks to sue for damages in the United States. The case had been tied up in litigation for a decade before finally going to trial in August.

The plaintiffs’ team of lawyers, led by Gary Osen, argued that Arab Bank knowingly processed large payments to Hamas leaders from a Saudi charity, as well as “martyr payments” — payouts of $5,300 — to the families of suicide bombers.

Shand Stephens, a lawyer for the defense, contended that the bank had followed all the guidelines set forth by the United States and other governments in determining which payments to allow and which to block. Stephens said that Arab Bank used software designed to flag the names of terrorists designated by the U.S. government.

The defense insisted that the financial institution should not be held liable for transactions that passed muster with the U.S. government.

Among the plaintiffs in the case was Sarri Singer, who was injured in a 2003 suicide bombing.

“I started crying when the email came in,” Singer, the daughter of New Jersey state Sen. Robert Singer, told JTA shortly after the verdict was announced.

Singer was on the No. 14 bus in Jerusalem on June 11, 2003, when the suicide bomber — standing a few feet from her — blew himself up. Sixteen people on the bus were killed and 100 others were injured. Singer broke her clavicle and she still has shrapnel lodged in her mouth.

“I feel very validated and acknowledged as a victim of terror,” Singer said. “The jury has given us a sense that there is someone responsible for what happened to us.”

A separate phase of the trial will determine how much the bank must pay the 297 terror victims and their families.

In a statement following the verdict, Arab Bank vowed to appeal and said the court proceedings amounted to a “show trial.”

Specifically, the bank said that due to foreign privacy laws, it could not turn over the documents requested by the plaintiffs’ lawyers in the lawsuit’s pretrial phase. As a result, sanctions were imposed and the bank was not allowed to refer to those documents, precluding much of their defense, according to the statement.

“Today’s decision, if it stands, exposes the banking industry to enormous liability for nothing other than the processing of routine transactions and the provision of conventional account services even if all governmental requirements are followed and the parties receiving services were in good standing with these governments,” the bank wrote in its statement.

This precedent, the bank wrote, would “create vast uncertainty and risk in the international finance system,” thus limiting access to financial services in parts of the world. Other terror-financing trials are pending.

The case is significant in that financial institutions can be held responsible for the actions of their clients.

A similar case was thrown out in 2012 by a U.S. District Court over this issue.

“Hamas is not the defendant,” the judge, Jack Weinstein, wrote in explanation at the time.