Ahead of another G.A., how close is Jewish Federations to its stated goals? 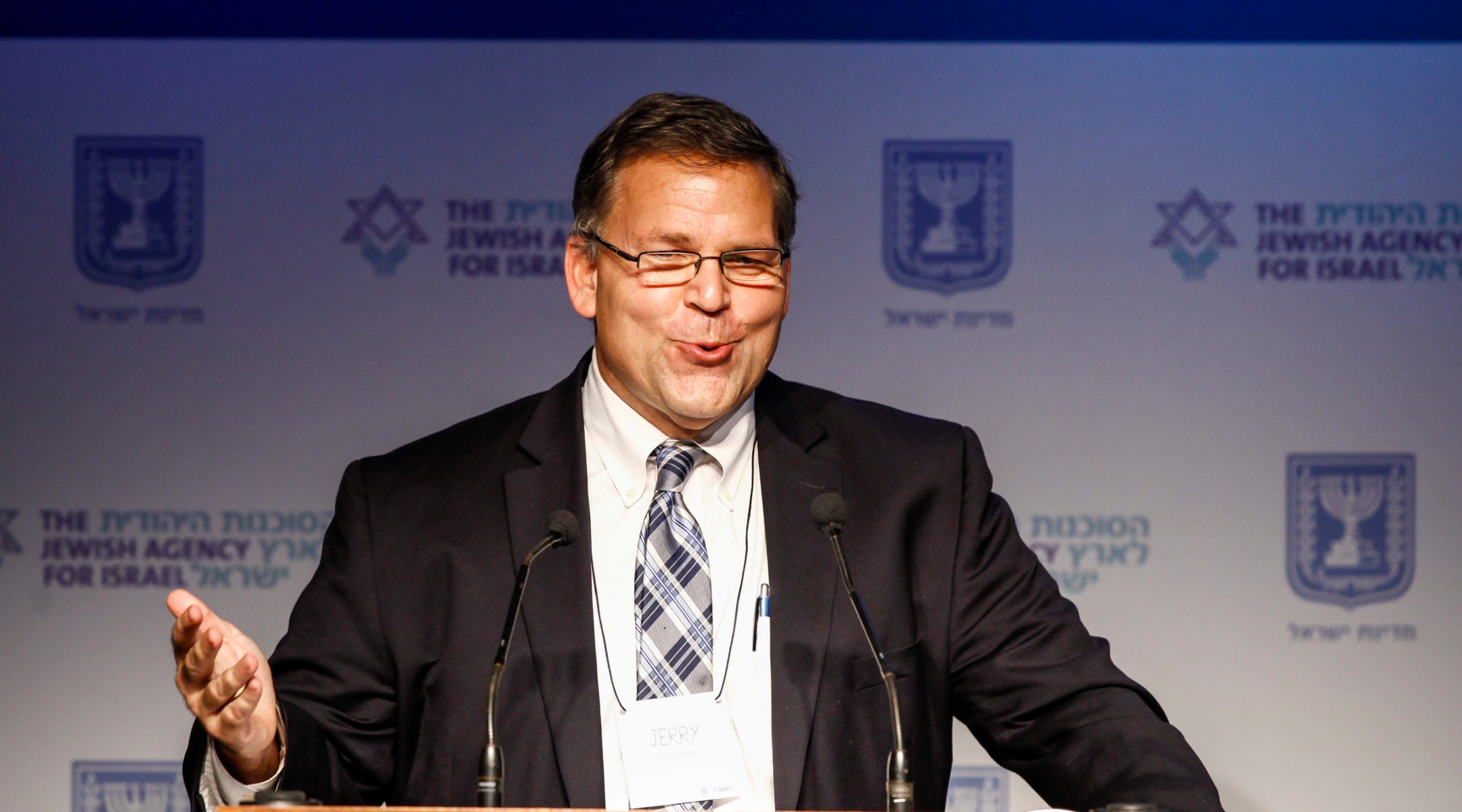 NEW YORK (JTA) – Jerry Silverman recently started his second five-year term as the CEO of the Jewish Federations of North America – the first time that any chief of the federation umbrella organization has been signed to a second term.

With the federations’ annual General Assembly nearing – it’s slated for Nov. 9-11 in National Harbor, Md., just outside of Washington — JTA thought it would be a good time to check in and see how the priority areas that Silverman identified last year have fared.

He outlined three priorities in his speech at the 2013 G.A. in Jerusalem. Silverman also presented two or three additional ideas in a Forward Op-Ed, co-authored with JFNA board chair Michael Siegal, in response to the Pew survey’s findings on Jewish America, and in an interview with JTA in the weeks leading up to that confab.

Here’s where those ideas and initiatives stand:

“Let’s have a national Google map of every young adult opportunity in the country.” – Silverman at the G.A., November 2013.

Postponed due to “other emergencies,” Silverman says, but “still in the queue.”

“We must commit to offering free Jewish preschool to every Jewish family, a ‘Jewish Head Start.’ ” – Silverman in the October 2013 Forward Op-Ed.

The Jewish Federations wants a growing number of communities to replicate a Jewish preschool discount program launched by the Chicago Jewish federation in 2008. Called JUF Right Start, the Chicago initiative offers tuition reimbursements of up to $2,000 to families with a child enrolled in Jewish preschool for the first time. The discount, which varies according to the number of days per week the child is enrolled, is open only to the first child in a family to attend Jewish preschool and is offered just in the first year. It is not need based.

Seven other federations now offer programs like Right Start; the Jewish Federations wants it to grow to 25 communities within two years.

However, with full-time preschool tuition ranging anywhere from $10,000 to upward of $20,000, the discounts are a long way from free.

“We need to triple the number of campers over the next five years.” – Silverman at the 2013 G.A. and in the Forward Op-Ed.

Before coming to the Jewish Federations, Silverman ran the Foundation for Jewish Camp, which has played a key role in expanding the number of children benefiting from nonprofit Jewish summer camp experiences. Last summer, for example, the foundation piloted a program called BunkConnect that offered first-time campers from middle- and lower-income families discounts of 40-80 percent on the camps’ standard rates. The foundation’s One Happy Camper program already offers one-time $1,000 grants to first-time Jewish campers regardless of income level.

Except for two or three very specific and limited programs, the Foundation for Jewish Camp is not a beneficiary of federations, but Jewish Federations spokespeople say a growing number of local federations are investing in One Happy Camper programs.

And in June, Siegal, the board chair, established a $1.25 million endowment to send Jewish children to Jewish overnight camp. But the endowment, designed to attract Jewish families who might not otherwise send their kids to Jewish camps, is a personal endeavor with his wife, not a federation grant. It’s being carried out in partnership with the Foundation for Jewish Camp, the Jewish Federation of Cleveland and the Jewish Education Center of Cleveland.

“We need a Wikipedia of Jewish communal knowledge. We’re going to build it and make sure it works right. We have no margin for delay; this will be a top priority this year.” – Silverman at the 2013 G.A.

Asked about this, Silverman talked about launching in 60-90 days an internal federation database with information on 140 innovative federation programs from around the country. The information-sharing initiative, which Silverman calls “fedovations” (think “federation” plus “innovation”), will be showcased at this year’s G.A. In its initial phase, the database will not be open to the general public, but it may be eventually.

Among the “fedovations” the G.A. will feature:

• “Amplify word-of-mouth to expand community and to redefine event marketing” (Santa Barbara, Calif.)
• “Holocaust Survivors Community Fund: Bringing enhanced quality of life services to over 200 survivors living below the poverty line” (Washington)
• “Chanukah in a Basket: Brings Chanukah and winter necessities in festive baskets to people in need” (Cleveland)
• “Online Campaign Dashboard: An innovative way for lay and professional teams to ‘get their hands around’ the annual campaign data” (Dallas)

“There are over 350,000 alumni of the Birthright Israel experience. We haven’t effectively followed up with most of them. … Particularly, we are imploring the gatekeepers to share this vast database of alumni contacts with us so that we have a mechanism to engage them in Jewish life.” — Silverman in the Forward Op-Ed.

Silverman credited Birthright with opening up its lists, particularly to local federations and other Jewish institutions interested in reaching local Birthright alumni. Birthright, he said, has “done a great job in both educating us on how to best access the data and have worked really closely and collegially.”

As for follow-up, Silverman said, “The amount of work on young adult engagement and follow-up to Birthright and campus work in partnership with various campus organizations has continued to grow and be nurtured.”

Three years ago, the Jewish Federations announced it was replacing its historic overseas allocations model – in which 75 percent of overseas dollars automatically went to the Jewish Agency for Israel and 25 percent went to the American Jewish Joint Distribution Committee for Diaspora needs – with a new Global Planning Table. Federation representatives from all over the country would sit together on the GPT and make decisions on global priorities they could all get excited about, and the money then would be doled out in line with those priorities rather than according to a set formula. The idea was to give federations with declining interest (and participation) in overseas funding a greater say and therefore more motivation to participate in the system.

The Global Planning Table, however, was plagued by delays. A year ago Silverman told JTA that the GPT was making “great progress” and was pursuing three priority areas, and would potentially launch a couple of “really exciting signature initiatives” in the following six months.

To date, no initiatives have been launched formally, but two have been approved by the JFNA board. One is called JQuest, which aims to promote Israel experience programs for Jews ages 18-34 that are longer than 10-day Birthright trips but shorter than Masa’s five- to 12-month programs. JQuest would be more of a clearinghouse than a producer of new programs, helping with marketing, program evaluation, subsidies for participants and follow-up.

At this point, JQuest is still more of an idea than anything tangible.

“We are just at the very earliest stage of development,” Jewish Federations spokeswoman Rebecca Dinar said.

The second initiative is Israel Children’s Zones, to help low-income Israeli children and their families break the cycle of poverty. The idea is based on the Harlem Children’s Zone, which runs three schools and a preschool program, parenting workshops and child-oriented health programs. Silverman says the program is “in the beginning of the execution mode.”

A third initiative related to religious diversity in Israel is still being concretized, Silverman said.

“We hope to see these initiatives begin their work in the next year,” he said.

When the 150-plus North American federations gather outside Washington next month, there will be some good news to share. Collectively, federation annual campaigns are up by 7 percent over last year at this time, according to the Jewish Federations. Overseas giving is up slightly – not including the emergency campaigns over the last year that raised more than $50 million for Israel and a smaller sum for Ukraine.

The goal of the G.A., Silverman says, is to inspire.

Featuring the theme “The world is our backyard,” the conference has been designed with its physical format to facilitate conversations – what’s known in Jewish conference-speak as schmoozing in the hallways.

Here’s how Silverman describes it: “We’re going to be really pushing the envelope,” he said. “We used to have an exhibition hall, where you’d walk up and down and see exhibitors. We’ve now created a whole space that has spaces for people to sit and have dialogue, spaces for different groups to meet. It’s real, new dynamic open space …We’ll see different groups go into a fedovation and then, whether it be volunteers or professionals, will come out and have a space to go really unpack them and say, ‘How can we apply it to our federation?’ ”