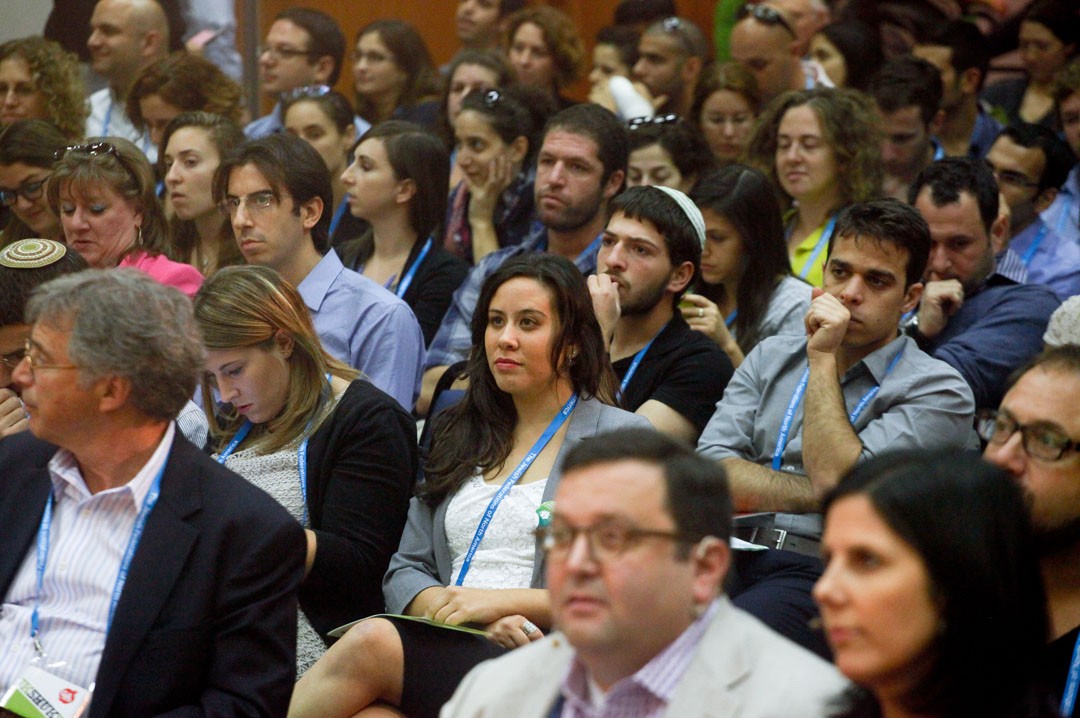 Participants take in a session at the 2013 General Assembly in Jerusalem. (Courtesy Jewish Federations of North America)
Advertisement

We’re living in a time in which endless access to information and 24-hour communication is challenging us to question just about everything. As a result, we have seen new models of business, philanthropy and outreach in every corner of the globe.

Airbnb, Zipcar and Kickstarter are examples of businesses that have successfully harnessed the tools of this new era to fill a need. For some, the opportunities are tremendous.

In the Jewish community, we have also witnessed a new age of innovation. Birthright, Moishe House and PJ Library are just a few organizations that have emerged to fill our communal needs. And at this year’s annual General Assembly of the Jewish Federations of North America, we are going to take a good look at how we can continue to maximize our potential.

We will know we have been successful when attendees leave with just as many new questions as answers and are inspired to continue the conversation long after the conference concludes.

The theme of the G.A. is “The World is Our Backyard.” The program amplifies this message through a combination of thinking sessions and inspirational moments, high-level speakers and new opportunities for federations to share their best programs and strategies, and discuss their scalability.

In Florida, for example, the Jewish Federation of Greater Orlando recognized how tough it is for adults with disabilities to find jobs. So the federation started a program called RAISE (Recognizing Abilities and Inclusion of Special Employees) that not only matches adults with special needs to part-time jobs, but also gives those employees professional support and job training, helping them to become valued and productive members of the community.

In San Francisco, the Jewish Community Federation was struggling to figure how to engage young people in philanthropy. The result was to schedule events around different themes that federation supports, whether Jewish camping or LGBT programming, with each attendee asked to make voluntary contributions.

In Vancouver, British Columbia, Jewish leaders saw the difficulty in getting social services to suburban areas and came up with JHub Richmond, which provides office space, meeting rooms and administrative support for social workers, counselors and peer support staff from various agencies to meet clients, family members and caregivers.

These kinds of programs are in our Jewish community backyards throughout North America. In fact, when Jewish Federations of North America solicited 153 North American federations for ideas to feature at this year’s G.A., to be held Sunday to Tuesday in National Harbor, Md., we received 250 submissions, selecting 50 to showcase.

By featuring these 50, we’ll be giving representatives from across North America the opportunity to gather ideas, share stories and question their colleagues on what worked for them, what didn’t and what they learned along the way.

It’s collaboration at its best.

And that’s what the General Assembly is all about: Federations are able to amplify the successes of their own communities to others, and think about the ways we can have a greater impact on the issues and concerns we share.

That’s the value of collaboration. And the collaboration extends to the global Jewish community, whether it’s aiding Israelis under rocket fire, helping to fund Jewish summer camps and other identity programs in the former Soviet Union, or assisting elderly afraid to leave their homes in Ukraine.

We’ll also hear compelling stories from some of the millions overseas whose lives we’ve touched this year, including Jews from Europe who are fighting the rising tide of anti-Semitism and Israelis from the resilient South. We will hear from Israel’s U.S. ambassador, Ron Dermer, the top editors of Haaretz and The Jerusalem Post, and students defending Israel on college campuses.

But most of all we’ll hear from each other, gathering as one big family in our “Backyard” — where the physical space has been transformed to foster and support conversations and schmoozing.

The G.A. Backyard transforms the traditional exhibit hall into a themed, welcoming area. Registration, exhibit booths, conversation areas, game areas, food areas and stadium-seating conversation pits will create the kind of casual meeting space where participants can, well, hang out and network. It’s an opportunity to learn from our successes and failures, exchanging ideas and offering guidance; to embrace a new age and a new way of thinking.

And of course, being together will fuel our “neshamot,” our souls, allowing us to return to our communities renewed and inspired.

Gerrald (Jerry) Silverman is president and CEO and Michael Siegal is chair of the board of trustees, respectively, of the Jewish Federations of North America.