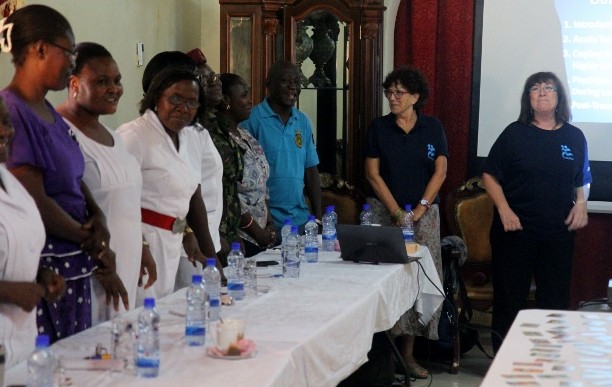 (JTA) – Even amid the unceasing horrors of Sierra Leone’s Ebola epidemic, it was a case that stood out.

A 5-year-old boy had been found in his home in a remote village, the lone survivor in a house riddled with the corpses of family members. He needed to be extracted; the bodies needed to be buried.

The operator who took the call at the Freetown hotline that coordinates the dispatch of ambulances, police and burial teams was shaken.

“Dealing with the psychosocial trauma is critical to addressing the Ebola outbreak,” Shachar Zahavi, IsraAid’s founding director, told JTA in an interview. “A major deterrent to treatment is that people don’t trust one another. If you don’t feel well, your family immediately hides you and you then infect your entire family. We’re trying to teach police, social workers, health workers and teachers how to deal with people who are afraid of them – and how to manage their own stress and anxiety.”

Last month, IsraAid’s work earned the organization a letter of praise and thanks from Sierra Leone’s first lady, Sia Nyama Koroma. She also happens to be a psychiatric nurse, and when IsraAid held a two-day psychosocial counseling workshop last week in Freetown, Koroma cleared her schedule to attend the entire program, according to Zahavi.

A 13-year-old organization funded in part by U.S. Jewish institutions and federations, and supported by the Israeli government, IsraAid honed its techniques in other disasters, such as the 2011 earthquake and tsunami in Japan and the 2013 typhoon in the Philippines. But IsraAid staffers say Ebola is their most challenging crisis.

“It’s more difficult than other disasters, mostly because it’s an ongoing disaster and it’s scary,” said Yotam Polizer, IsraAid’s regional director for Asia and now the person in charge of the Africa response. Polizer spent most of October in Sierra Leone and will head back there next week from his home base in Japan.

IsraAid has brought four Israelis to Sierra Leone: two psychosocial trauma specialists and two logistics experts. Next week another six will arrive, and Polizer is working on hiring a team of locals.

It’s hard to recruit Israelis to join the effort, organizational officials say, because they must be fit enough to work in grueling conditions required by Ebola protocols and be able to clear their schedule for at least six weeks: one week for training, three to four weeks in the field, and two to three weeks afterward to make sure they’re not infected.

And then there’s the fear factor.

“At least two to three times a day people start to freak out, worrying they have a fever, and they have to be calmed down,” Polizer said. “It’s very challenging.”

When he returns to Sierra Leone next week, Polizer said he’ll have to reacquaint himself with the demanding strictures of life in the Ebola zone, including taking his temperature every few hours; washing his hands with chlorine 20-30 times a day; refraining from any physical contact, even handshakes, with other people; and eating only at three or four carefully vetted restaurants. Most difficult of all will be trying to make sure not to touch his own eyes. Relief workers say eyes are the most easily infected part of the body.

IsraAid is the only official Israeli presence in the Ebola zone. But while Israeli Defense Minister Moshe Yaalon declined a U.S. request to send Israeli military staff to Africa, the Israeli Foreign Ministry is sending equipment for three mobile medical clinics in the affected region. IsraAid has been tasked with receiving the two shipments going to Sierra Leone and Liberia, and helping integrate the clinics into existing international aid efforts run by such groups as International Medical Corps, Doctors Without Borders, and the U.S. and U.K. armies.

In the United States, the New York-based American Jewish World Service has been leading the Jewish effort to send financial help to the hot zone, funding 10 groups in Liberia and one in Senegal that are working to contain the Ebola outbreak.

These groups’ efforts include using radio stations and rural media organizations to carry out public education campaigns combating Ebola’s spread; training and equipping volunteers to deliver hygiene materials and information pamphlets to local households; providing psychosocial support and counseling to Ebola survivors and their families; renovating a clinic to act as an Ebola quarantine and triage center; and in one case, providing primary medical care services to locals in light of the collapse of local health care systems.

“When the outbreak grew in intensity this summer, we consulted our existing grantees in Liberia to find out which resources they needed to respond to the epidemic in their communities,” said Ruth Messinger, the president of American Jewish World Service. “These local activist groups were well positioned to take this work on because they were already well-established and trusted members of their communities.”

AJWS has disbursed about $405,000 to its recipient organizations and raised about $820,000 from donors. Most of that sum has come in over the last six weeks, since AJWS increased its fundraising goal to $1 million from $200,000.

Despite all the challenges of working with Ebola, Polizer said there have been moments of satisfaction. In IsraAid’s stress management workshops for relief workers and Ebola survivors, leaders employ a variety of tactics. Role play exercises are designed to help Ebola survivors cope with people who stigmatize or reject them because they’ve had the disease. Health workers practice movement and dance therapy to help cheer them up, and breathing exercises to help them relax.

The head nurse of one hospital outside Freetown came to one of IsraAid’s stress management sessions burnt out and afraid after having lost more than 35 colleagues to Ebola, Polizer recalled. Instructors helped the nurse with a relaxation technique in which participants close their eyes and imagine themselves in a safe place.

The nurse fell asleep, and when she awoke she was smiling. It was the first time since the outbreak began, Polizer said she told him, that she had enjoyed a proper sleep.

(This story has been updated to reflect the updated total sum distributed by AJWS,)