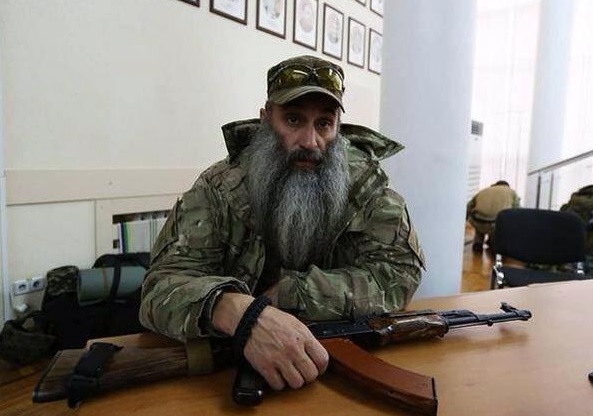 Asher Joseph Cherkassky in Dneproperovsk in 2014. (Courtesy of http://evreiskiy.kiev.ua)
Advertisement

But Cherkassky’s look is no attempt to emulate the Cuban revolutionary or any of his bearded associates. Rather, it is the result of his being an Orthodox Jew who is also a fighter in the Dnipro Battalion — a Ukrainian paramilitary force tasked with blocking any Russian advance from the east.

Which is why online pictures of Cherkassky recently generated some buzz in social media: After all, an Orthodox Jew fighting for Ukrainian sovereignty is a powerful visual tool in the propaganda war being waged between the two countries, in which mutual accusations of anti-Semitism have become a recurrent element.

On Sunday, Cherkassky’s performance in the field received praise from one of Ukraine’s most powerful men — deputy governor of the Dneproperovsk region, Boris Filatov. He posted on his Facebook page a few photographs of Cherkassky in and out of uniform, including a picture from a Purim party.

“Of course, some of you have seen in your timeline [on Facebook] pictures of a big guy with a huge beard, like Fidel Castro,” wrote Filatov, who is the right-hand man of Igor Kolomoisky, the Jewish oligarch and the region’s governor. “This is his country and that of his children. And this country will always consider him as a hero and a symbol of the resistance,” Filatov, who is not Jewish, added.

The current conflict between Russia in Ukraine began in March, after a revolution ended with the ousting of former president Viktor Yanukovych, whom many accused of corruption and of being a Kremlin puppet. He fled to Russia, which annexed Crimea from Ukraine ostensibly to protect religious and ethnic minorities there from xenophobes that Russia said were behind the revolution. In parallel, heavy fighting has developed in some cities in Ukraine’s east between pro-Russian militias and government troops.

Filatov’s statement on Cherkassky received some attention in Ukrainian media, including on the Jewish Ukrainian news site evreiskiy.kiev.ua.

“The only thing that troubled Cherkassky on the front was the lack of kosher food,” Filatov wrote. He drove the message home by presenting Cherkassky’s devotion as refuting allegations by Russia’s president, Vladimir Putin, that the Ukrainian revolution was carried by anti-Semites and fascists.

“The efforts of all the liars and cowards in the world (including Russian rabbis who listened to Putin’s nonsense about “the talented Goebbels”) do not change Cherkassky’s feats,” Filatov wrote in reference to Putin’s remark in July alluding to the Nazi propaganda chief Joseph Goebbels.

Putin’s reference to Goebbels was clearly ironic and made in context of the Russian president’s condemnation of Holocaust denial. But anti-Russian media in Ukraine and beyond presented it as straightforward praise from Putin for the chief advocate of the ideology that Putin often describes in speeches as the epitome of evil.