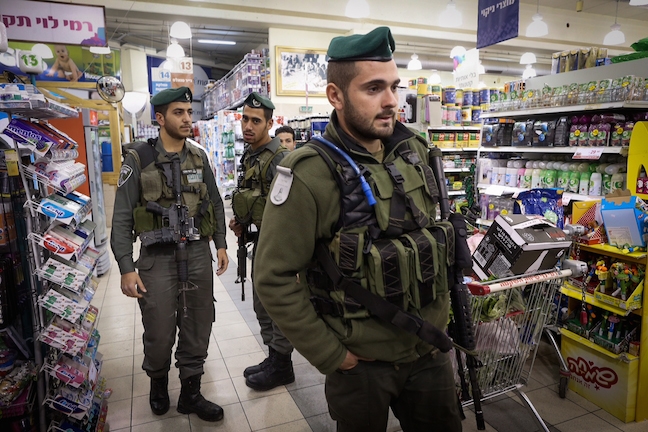 Israeli security and police forces seen at the Rami Levy supermarket in the Mishor Adumim industrial zone, east of Jerusalem near the Jewish settlement of Maaleh Adumim where a Palestinian man stabbed two people and was later shot by a security guard, Dec. 3, 2014. (Nati Shohat/FLASH90)
Advertisement

TEL AVIV (JTA) — This government was supposed to be different.

During the last election campaign in 2012, Israelis seemed to tire of the existential issues that have plagued the country for decades. Barely anyone talked about the Israeli-Palestinian conflict. Long-simmering social tensions over the rising cost of living and the economic burdens of the underemployed haredi Orthodox community were going to finally get their due.

Though Jewish Home vehemently opposed Palestinian statehood and Yesh Atid supported it, both agreed that haredi Orthodox men should be drafted into the army and integrated into the workforce.

Less than two years later, the partnership has broken up over the very issues that the parties had downplayed. Bickering over peace talks began in the spring and the shouts grew only louder after this summer’s war with Hamas. The recent crisis in American-Israeli relations further fanned the flames.

The rifts came to a head last week with the Cabinet’s adoption of the so-called nation-state law —  a measure to enshrine Israel’s Jewish character into law. Bennett supported the bill, while Lapid, the finance minister, and Justice Minister Tzipi Livni were opposed.

Netanyahu also singled out Lapid and Livni for their criticism of government policy after firing them from their Cabinet posts. The next government, the prime minister vowed, would be like the previous one — a stable coalition of hawkish, conservative parties.

Following the collapse of peace negotiations, the kidnapping and murder of three teenagers in June, the 50-day war in Gaza over the summer and the recent violence in Jerusalem — including the killing of four Jewish worshippers and a Druze policeman at a Jerusalem synagogue last month — politicians are focusing again on the issues that have always preoccupied them. After elections, now scheduled for March 17, everything old will become new again.

“The 2013 campaign was after relatively quiet years,” said Tal Schneider, author of the respected political website Plog. “Israel is not used to having such a length of time without any terror attacks. We’re back to normal, [but] last time it wasn’t on the agenda.”

Recent polls predict the elections will be good for parties on tיe far left and right that have made the Palestinian conflict their principal issue. Surveys show Jewish Home jumping from 12 to 16 seats, even 19, and the far-left Meretz, which went from three to six seats in the last election, rising to nine. Every survey shows Yesh Atid losing seats.

Meanwhile, Likud’s historic chief rival, the left-wing Labor party, has returned to its dovish roots, electing as chairman Isaac Herzog, a former corporate lawyer who strongly supports peace talks with the Palestinians. Herzog replaced Shelly Yachimovich, an assertive former journalist who stayed all but silent on the Palestinian issue in the 2013 elections.

And that shared agenda of integrating haredim into the army and workforce? The realities of parliamentary politics will almost definitely make that a thing of the past.

If he wins again in March, Netanyahu has vowed to ally again with haredi parties who seek to roll back the law passed earlier this year requiring some haredi men to serve in the army. Even a left-wing government would likely need haredi support to form a parliamentary majority.

Israelis, of course, still care about housing prices that have soared 80 percent since 2007 and growing income inequality. An as yet unnamed party founded to address those concerns, headed by former Likud minister Moshe Kahlon, is expected to draw plenty of votes.

But Israelis aren’t pitching tents on the street to protest economic policy as they did in 2011. This year, they have massed to support soldiers fighting in Gaza, pray for the kidnapped teens, oppose the nation-state law and protest the torching of a Jewish-Arab school.

“People vote by security,” Schneider said. “They may say in the polls that they’re more into the housing crisis, but it’s really never about the economy.”