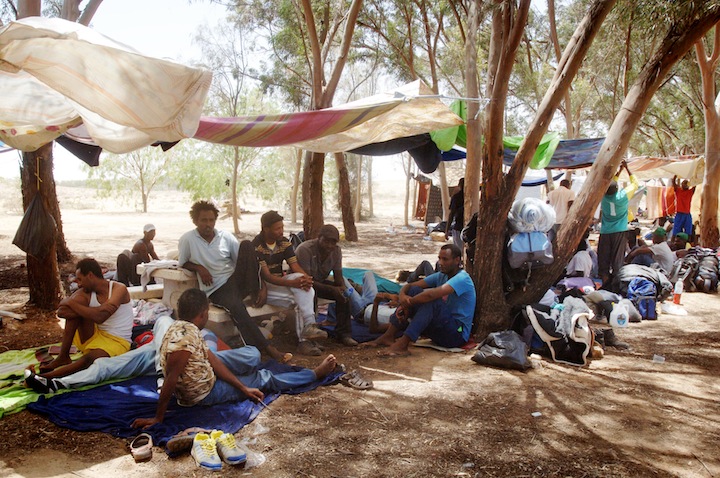 African asylum seekers from the Holot detention center seen in their makeshift tent city on the Israel-Egypt border, where they had marched to protest Israel’s detention policies, June 29, 2014. (Flash 90)
Advertisement

The Knesset approved the measure on second and third readings Monday by a vote of 47-23. The vote came hours before the government voted to dissolve itself and move to new elections.

An amendment to an existing infiltration law, the bill eases certain conditions struck down in September by the Israeli Supreme Court.

Under the new law, illegal migrants will be held in closed detention centers for three months and then can be kept at the Holot open detention center in the Negev for up to 20 months, where they will be required to be present at a head count once a day instead of three times.

Employers who illegally employ African migrants now face tougher penalties. Also, migrants with work permits must pay a monthly deposit that will be returned when they leave the country.

In September, Israel’s Supreme Court ordered the state to close the Holot center and struck down the section that allows the illegal migrants to be held in closed detention for one year.

Had the new law not been passed before the Knesset dissolved, the court would have required the freeing of  all 2,500 migrants being held at in Holot.

More than 40,000 Eritreans and Sudanese are in Israel, most illegally.