Is Livni’s move to team with Labor one of principle or opportunism? 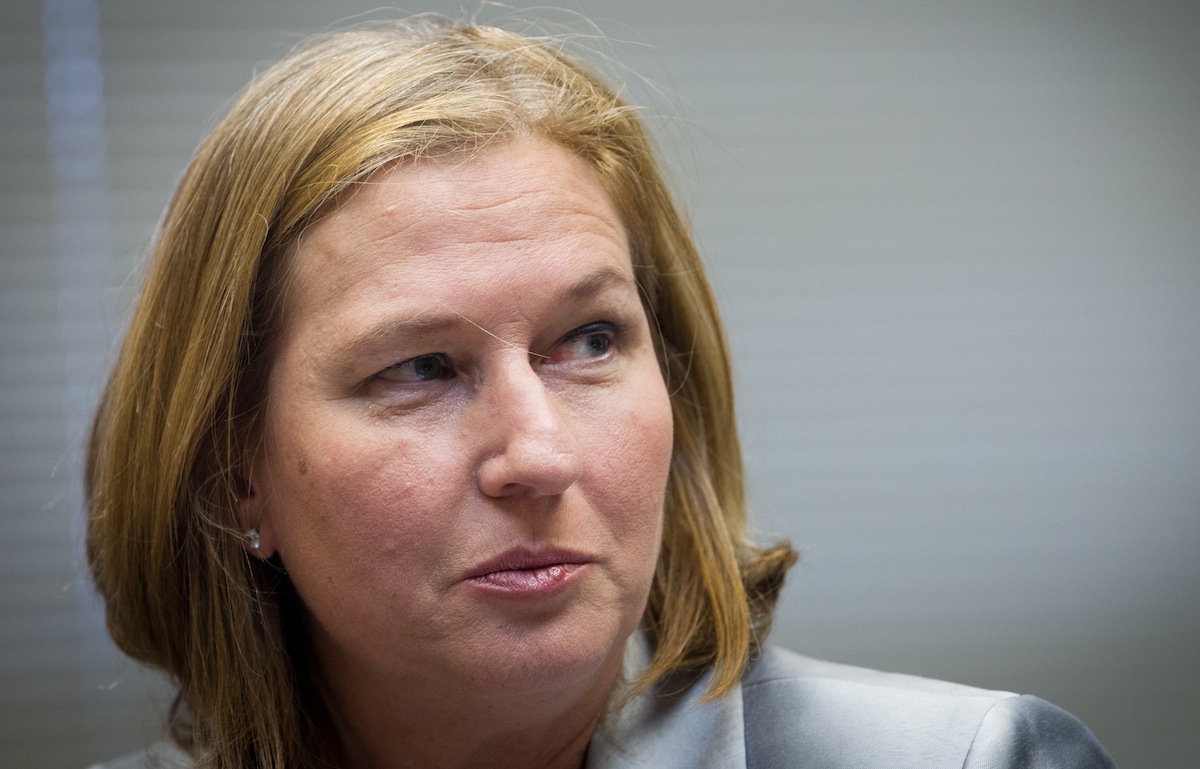 TEL AVIV (JTA) — In the latest episode of the satirical show “State of the Nation,” the zingers aimed at Israeli Prime Minister Benjamin Netanyahu weren’t coming from the comedians.

Tzipi Livni, who until last month was Netanyahu’s justice minister, called the prime minister a “zero” on the program Saturday night and promised to “take out the trash” in the March election.

But her most brutal jab came when she defended the recent union of her center-left Hatnua party with Labor, led by Isaac Herzog. The parties will run as a joint slate in the upcoming national elections and, if victorious, Herzog and Livni would each serve two years as prime minister.

“I thought a rotation of two potent prime ministers is better than one prime minister who’s impotent,” Livni said. “In my new pairing with Herzog, we’re going on a new path that will give hope to the nation of Israel.”

The Labor agreement is one more stage in what has been a tumultuous political decade for Livni.

A former minister of the right-wing Likud, Livni is joining her fourth political party in nine years and leading a campaign to replace the current Likud government with a left-wing coalition.

Her allies say her progression reflects a steadfast commitment to sensible policies amid a chaotic political landscape. Critics say the party switching reeks of opportunism.

“At this point in time, party institutions are weak, so we’re in a place where every candidate makes his own calculation for every election,” said Yohanan Plesner, a former lawmaker who served with Livni in the Kadima party and now heads the Israel Democracy Institute think tank. “The lines blurred, so it allows much more flexibility in people moving between parties.”

A daughter of former militants in the right-wing Irgun militia, Livni began her political career with Likud in 1999. She ascended to Cabinet minister under Prime Minister Ariel Sharon, and followed Sharon when he split with Likud in 2005 to form the centrist Kadima.

Livni became foreign minister when Kadima won the 2006 elections, and rose to lead the party in 2008 after Prime Minister Ehud Olmert resigned. But she lost the 2009 elections to Likud and left Kadima in 2012 after losing in the party primary.

Ahead of the 2013 elections she founded Hatnua, promising to depose the Likud government and sign a peace accord with the Palestinians. But when Hatnua took only 5 percent of the vote, Livni joined a Likud-led coalition. That government broke up last month when Netanyahu fired Livni from her post as justice minister, and she united with Labor about a week later.

Throughout the changes, Livni has sought to portray herself as a principled leader who has stayed the course as the political ground has shifted beneath her. She advocates for minority rights, tough security measures and territorial compromise with the Palestinians — policies, she says, that a rightward-shifting Likud has mostly abandoned.

“I’m in the same place, with the same positions and the same opinions,” she said on “State of the Nation.” “Likud is escaping to the extreme right. Others are going to delusional places. I’m continuing with what I believe.”

Livni’s opponents in Likud, quick to document her zigzags across the political spectrum, counter that her willingness to discard party loyalties shows that she’s interested only in her own career.

“The unholy alliance between Herzog and Livni breaks a new record of political cynicism,” Likud lawmaker Yariv Levin wrote on Facebook last week. “Livni’s journey of switching from Likud to Kadima, from there to Hatnua and now to the Labor party, shows that a loss of direction, despair and small politics have taken over the Israeli left.”

Despite the criticism, the union with Labor seems to have elevated Livni’s public standing. Recent polls show the Labor-Hatnua list as the leading party heading into the elections. Before the merger, polls showed that Livni would barely have garnered enough votes to enter the Knesset.

Shlomo Avineri, a political science professor at Hebrew University, said voters might not mind Livni’s maneuvers because party switching has become a mainstay of Israeli politics. Sharon helped form Likud in 1973 only to leave it, rejoin in 1977 and leave again in 2005. Former President Shimon Peres was a member of three parties during his nearly 60-year political career. And changing loyalties, Avineri said, has only become more frequent in recent years.

“The last 10 years have been characterized by some very centrist people in the Likud leaving the Likud and moving toward a more centrist position,” Avineri said. “People in the center are usually not party loyalists. They can go either way.”