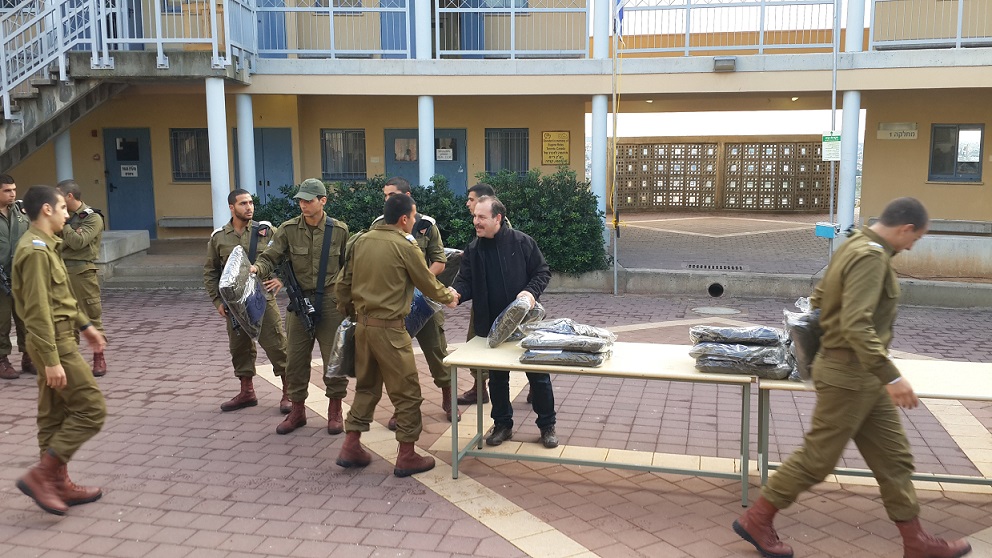 (JTA) — When the season’s first snowstorm descended on Mount Hermon in the Golan Heights a few weeks ago, it didn’t take long before M, a career sergeant in the Israel Defense Forces, received a phone call from Leon Blankrot.

“What do you need to keep warm?” asked Blankrot, executive director of Yashar Lachayal, an organization that aids Israeli soldiers and is funded by donations from American Jews.

A couple of days later, a shipment of hats and neck warmers arrived for M and the soldiers under his command.

“The army provides winter clothing, but there are things the IDF does not supply, like neck warmers and other things civilians wear,” said M, who asked that his name not be published because the army had not authorized him to speak to the media. “That’s where Leon comes in.”

Yashar Lachayal is among the efforts to help Israeli soldiers that are funded by Jews living stateside. The initiatives range from large, well-established organizations — most notably Friends of Israel Defense Forces, or FIDF — that are supported indirectly by U.S. taxpayers (because, as 501(c)3 nonprofits, the donations they receive are tax deductible) to tiny start-ups run by individuals and operating without any formal oversight.

Sending U.S. Jewish aid to Israeli soldiers can be a touchy subject. U.S. law bars sending weapons or combat equipment to foreign armies without U.S. government authorization, and the Israel Defense Forces has rules about what sort of material soldiers are permitted to accept from outside groups (for example, soldiers may wear only IDF-issued boots). The IDF, which declined to be interviewed for this story, also does not want to be seen as a charity case.

But like U.S. soldiers who went into combat in Iraq without armor-plated Humvees, which could have offered better protection against rocket-propelled grenade attacks and improvised explosive devices, Israeli soldiers don’t always get everything they want or need.

“Sometimes I’m the guy that comes through faster or when they don’t have recourse,” Blankrot told JTA. “If there’s a base on the Egyptian border and they have five broken air conditioners, by the time they get a technician to fix them it can take months. I can get it to them in two to three days.”

The Israeli army supplies soldiers with plastic canteens, but Yashar Lachayal offers them CamelBak-style water backpacks that can keep water cold for hours. During last summer’s war with Hamas in Gaza, Blankrot spent weeks shuttling to the Gaza border from his home near Jerusalem handing out toiletries, Styrofoam thermoses filled with ice and travel pillows for combat soldiers heading into Gaza. He found laptops with special voice-recognition software for injured soldiers unable to use their hands and bought orthopedic beanbags for soldiers with shrapnel wounds who needed to recover before they could have surgery. In one case, Blankrot paid to widen the front door of a soldier’s home that was too narrow for his wheelchair.

The biggest and best known of the IDF support groups is FIDF, a $70-million-a-year organization with chapters throughout the United States that backs capital projects like cultural centers for soldiers; enrichment programming such as educational seminars and Jewish identity tours; university scholarships for IDF veterans; prosthetics for injured soldiers; bereavement support; and aid to indigent soldiers, including winter wear. It does not provide combat or tactical gear.

The organization has 13 regional U.S. chapters and divisions for real estate professionals and young leaders.

FIDF, which has 501(c)3 status, raised $68 million in 2012, the last year for which public data are available. About two-thirds of the money, $39 million, was spent on grants; salaries and expenses ran in excess of $16 million. FIDF officials declined multiple requests to be interviewed for this story.

By contrast, Yashar Lachayal — Hebrew for “straight to the soldier” — is a $500,000-a-year organization founded during the 2006 Lebanon War that operates under the pledge that every penny donated (via the group’s tax-deductible American fundraising arm, Friends of Yashar Lachayal) goes directly to soldier aid.

What little overhead there is — a salary for Blankrot and one other staffer, plus some expenses — is covered by the Moskowitz family of Miami Beach. The ailing family patriarch, Irving Moskowitz, is known both for supporting controversial Jewish housing projects in Arab neighborhoods of Jerusalem and for myriad philanthropic causes in Israel and the United States. (Moskowitz, a physician, made his fortune managing hospitals and securing a lucrative bingo contract with the city of Los Angeles.)

The biggest chunk of Yashar Lachayal’s funds comes from the Moskowitz family, with the remainder raised through parlor meetings in American Jewish communities and solicitation campaigns by American family members of “lone soldiers” without family in Israel.

U.S. Jewish federations, which collectively raised $50 million in an Israel Emergency Campaign this summer, support Israeli soldiers primarily through programs operated by the Jewish Agency for Israel. For example, $350,000 from the federations’ summer campaign went to Wings, a Jewish Agency program that provides crisis support, mentoring, and personal and career guidance to lone soldiers. (The bulk of the $22 million disbursed thus far from the emergency campaign has gone to assistance for hard-hit Israeli towns, trauma support, respite days for children, aid to the elderly and support for businesses affected by the conflict.)

Then there are the start-ups.

When tensions erupted this summer around Gaza, the first thought to hit Jeremy Nye, a 31-year-old American immigrant who recently finished his IDF service, was: What can I do to help?

Jeremy Nye delivered a car full of donated bulletproof vests to soldiers in a Givati unit of the Israel Defense Forces during this summer’s war between Israel and Hamas in Gaza. (Jeremy Nye)

With Israeli troops mobilizing, Nye jumped on his motorcycle and rode to the Gaza frontier to deliver pizzas to his former unit in Givati, an IDF combat brigade. His effort echoed the work of PizzaIDF, a group established in 2002 that sends pizzas, small gifts and holiday food to Israeli soldiers on the front lines.

Almost immediately, Nye started hearing about other needs from his army buddies, so he launched a crowdfunding-based campaign online that he dubbed Gear Up Our Soldiers. Within a week he had collected $3,000. Starting with flashlights and pizza, Nye soon expanded to tactical gear, including bulletproof vests, knee pads, combat gloves and headlamps.

Nye says he has delivered more than $40,000 worth of food, supplies and gear, using Facebook and word of mouth to raise money. In recent weeks he also began handing out pepper spray to Israeli civilians. Nye’s effort is not registered as a nonprofit in Israel or the United States, nor is it formally recognized by the IDF.

“A lot of regular units don’t have the finances for specialized gear,” Nye said. “Officially the army can’t ask for donations. A lot of soldiers pay to upgrade their own gear. I’m just providing it to people who aren’t able to buy it.”

Blankrot says soldiers on the receiving end of U.S. Jewish aid are appreciative not just of the material support but of the morale boost that comes with it.

“I tell the soldiers these donations come from Jews who care about you, who pray for you,” Blankrot said. “I tell them you’re not by yourself, you have American Jewry behind you.”