For Cuban Jews in U.S., rapprochement with Castro regime cause for concern 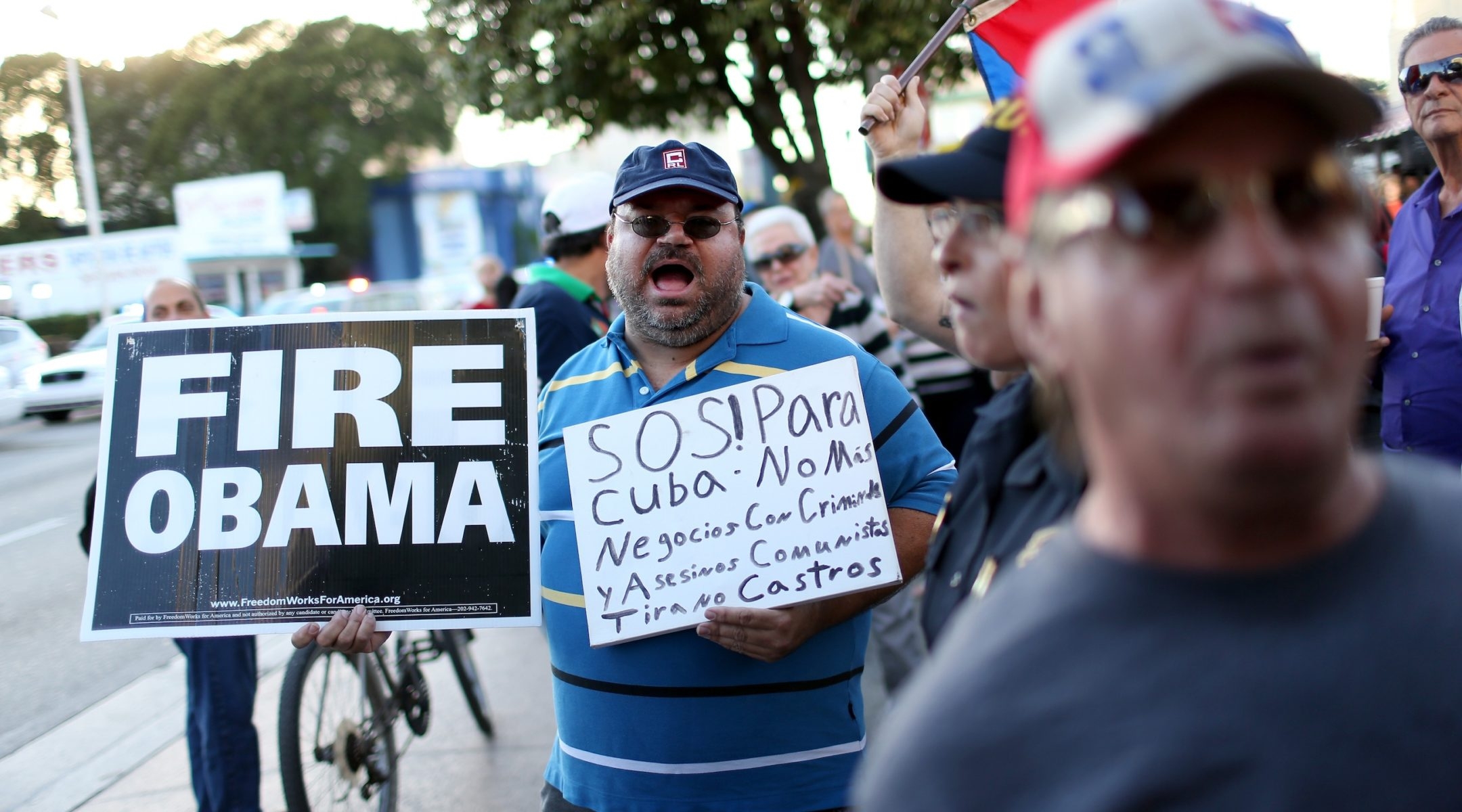 People stand outside the Little Havana restaurant Versailles, as they absorb the news that Alan Gross was released from a Cuban prison and that U.S. President Barack Obama wants to change the United States Cuba policy, Dec. 17, 2014 in Miami. (Joe Raedle/Getty Images)
Advertisement

(JTA) – For many Cuban Jews – the majority of whom now live in the United States – it has been a bittersweet week.

Like countless Jews around the world, they cheered the release of Alan Gross, the American Jewish telecommunications contractor who had been held in a Cuban prison for the last five years.

But then there’s the matter of reestablishment of diplomatic relations between Washington and Havana.

For those old enough to remember the most brutal years of the Castro regime, the idea of rapprochement with a country still ruled by the Castro family (Fidel’s brother, Raul, is now president) is more cause for concern than celebration. And while there’s some acknowledgment that ending the embargo may bring some benefits for the Cuban people, it is surpassed by abiding concern that the deal President Obama announced on Wednesday will extend the life of a brutal dictatorship whose crimes can be neither forgotten nor forgiven.

“Castro is being saved today by Obama!” bemoaned Joseph Perelis, who came to the United States in 1961, two years after Fidel Castro took power in Cuba. “In the terms I see, this will allow Castro to maintain his grip on power.”

The newly announced deal with Washington, he said, likely would enable Cuba to adopt the Chinese model: a Communist regime where the army and the party are enriched by capitalist enterprise while the cheap labor of the people is exploited for the benefit of the regime and its trading partners.

Nancy Brook, who left Cuba in 1961 when she was 12, expressed similar concerns, even as she acknowledged the failure of America’s Cuba policy to dislodge the Cuban regime.

“It is obvious that the so-called embargo has not worked,” she said. “But will these new measures bring benefits and freedom to the Cuban people or just benefit the Cuban government and their bunch of thugs?”

Brook has not been back to Cuba since she left. Her parents came to the United States three years later, after the two stores and eight-story building they owned were confiscated by Castro’s Communist regime.

There is something of a generational divide among Cuban Americans when it comes to the question of the embargo. Many younger Cuban Americans say ending the long U.S. embargo may provide new opportunities to change life in Cuba for the better. But those who witnessed the regime’s crimes firsthand generally believe there can be no rapprochement with a Castro-led government.

“The older Cubans, both Jewish and non-Jewish, are mostly against because they suffered: They had to abandon Cuba, they saw a lot of injustices,” said Sergio Grobler, a past president of the Cuban Hebrew Congregation of Miami, Temple Beth Shmuel. “The younger Cubans mostly are for an easing of the relationships between Cuba and the U.S., because the most horrifying things happened before they were born. When you don’t see it with your own flesh, it’s different. But I think it would be immoral to accept what has been happening.”

That generational divide is evident within Grobler’s own family. Grobler says his son has talked to him about wanting to visit Cuba; visits by Americans have been permitted to the island nation for some time, so long as they take place under certain conditions, such as under religious or journalistic auspices. Grobler says he has no problem with his son going to see the place his father grew up and visiting the local Jewish community, but he himself won’t go until the Communist dictatorship has been removed.

“I refuse to go to Cuba,” Grobler said. “I refuse to do business with them. I will go the day prior to the day there will elections in Cuba.”

In the Perelis family, too, the generational divide is evident.

“In general, younger Cuban-Americans (myself included) see the embargo as a stupid policy which only gives the Castro regime an enemy to blame and excuses for their incompetence and absence of human rights,” said Joseph Perelis’ son, Ronnie Perelis, who is a professor of Sephardic studies at Yeshiva University and was born in the United States. “Nixon went to China. We have had diplomatic and military relationships with dastardly regimes from the Saudis to [Chilean dictator Augusto] Pinochet.”

Yet Ronnie Perelis acknowledges some ambivalence about this week’s announced changes.

“Clearly the embargo has been a failure and perhaps openness can open a new way forward,” he said. “The chance of person-to-person contact changing things in small ways in the island is not insignificant.”

But, he added, the change may also “simply leave the regime in a stronger position to continue their control of the population without any democratic change.”

Marcos Kerbel, a past president and now chair of the finance committee at the Cuban Hebrew Congregation in Miami, says the community is taking a wait-and-see attitude for now.

“We’re all extremely happy about the release of the Alan Gross,” Kerbel said. “I don’t take political sides. We see in Congress there are some debates about the new policy. My attitude right now is wait and see what’s going to happen.”