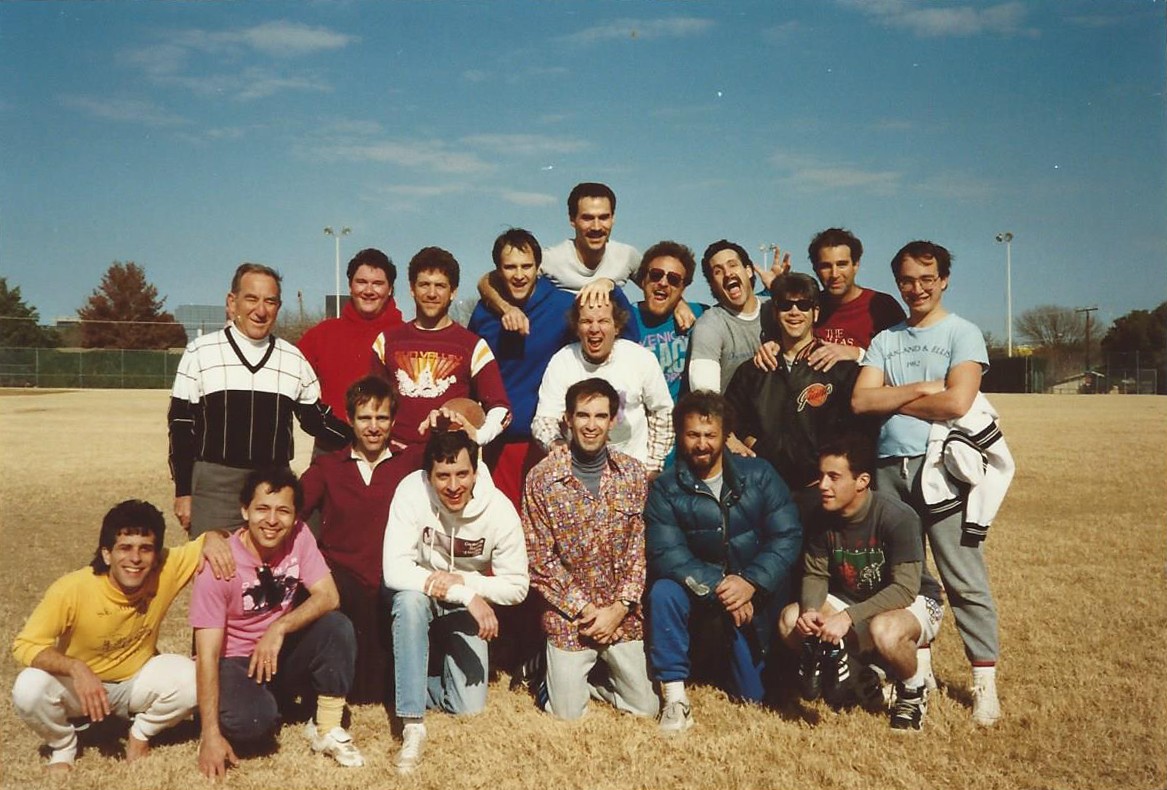 (JTA) – While chestnuts roast on open fires elsewhere in Dallas, another holiday tradition beckons for some of the city’s Jews: the Christmas Day Classic recreational football game.

The first such game took place in 1964, when 16 teenage boys were looking for a diversion on an otherwise uneventful day. Now those “boys” are in their mid-60s, and joined on the field each year by grown sons, daughters and friends. Ten of the players participate every year, some coming from as far as New York and California; six others attend more sporadically.

The landmark 50th anniversary was slated to kick off Wednesday night at the Texas Theater, with a dinner followed by the screening of an 18-minute documentary film about the Christmas tradition produced for the occasion by veteran player Mark Schor.

That represents a temporary time-out from the decades-long festivities-opening event: a dinner of Israeli food prepared by Ruth Schor, the Haifa-raised wife of Mark Schor, who with his friends launched the football game with a 7-on-7 contest that evolved into the Classic.

“We became hippies together, have had successful careers and have moved into the next phase of adulthood, which is the middle-age-to-early-retirement years,” said Mark Schor, who headed up the semi-centennial planning and huddled with the film crew to create the documentary, all while working at his job as an executive career coach.

The Christmas Day Classics come and go like third-string linebackers. About once a decade, to celebrate the game’s longevity, participants have ordered T-shirts and souvenir programs. But 50 is on yet another level. The new film, party and theater rental cost about $25,000 – “It’s like making a wedding,” Mark Schor said — and was underwritten by players and other members of the Dallas Jewish community.

Other vital stats: The field is 70 yards long, first-down markers are painted 17½ yards apart, the end zone is eight yards deep and “CDC” is stenciled in at midfield. There’s punting, but no kicking; touchdowns are followed by two-point conversion attempts from the three-yard line.

While the Dallas Cowboys are now ensconced at their third home stadium, the Classic has always been played at the Jewish Community Center of Dallas field. In the early days, several children watching from the window of a second-floor apartment nearby were the game’s sole spectators. Now, far more spouses, children and others watch the action. Sometimes local television crews work the sidelines.

The game’s commissioner who doubles as the referee (readers may insert Roger Goodell wisecracks) is Steve Gutow, the president and chief executive officer of the Jewish Council for Public Affairs. Gutow, an original team member who flies in each year from New York, went on the Classic’s disabled list decades ago, thanks to a game-induced concussion back when the contests involved tackling. (He also sustained a knee injury in the touch football era.)

For Wednesday’s dinner, Gutow, who’s also a rabbi, was summoned from the sidelines to deliver some Torah commentary. He planned to present a profound parallel with the biblical concept of the yovel, or jubilee year, that falls every half-century. “In the Torah, everyone is put back to where they were 50 years earlier — your land and identity are who you are as a person,” Gutow said. “I think that’s a good metaphor here. When we come back 50 years later, we’re coming back to who we were and who we are.”

Nearly all of the players grew up in Dallas’ Preston Hollow neighborhood, went to Hillcrest High School, worshipped at the same Reform and Conservative synagogues and were active members of BBYO’s Aleph Zadik Aleph chapter. The annual game is but one dimension to the enduring friendships, since the core group of players consistently attended each other’s celebrations and remained close.

That’s what’s happened, too, with the second-generation players. Schor’s three sons, all of whom now live in Colorado, usually return to Dallas for the game and the night-before gathering. Another newbie, 27-year-old Marissa Gallant, said that friends near where she lives in Los Angeles are stunned to hear that she returns to Dallas to play in the Classic. The Los Angeles friends, she explained, said they’ve retained none of their youthful bonds.

The buddies of her dad, Michael, “feel like uncles,” said Gallant, a freelance Web and media producer. “It feels very warm and welcoming when we get together.”

As to the scouting report on her gridiron talents, Gallant offered this: “I’m much better at the short passes: I run five steps and turn around.”