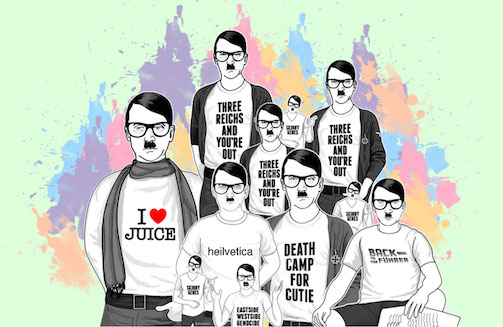 Most people don’t picture the typical neo-Nazi cooking vegan food or wearing skinny jeans. But as the neo-Nazi movement in Germany continues to decline in numbers and influence, some Germans are trying to shed their intimidating skinhead image to appeal to a younger generation. That means trading black combat boots for Converse sneakers and Tumblr blogs.

Rolling Stone and NBC News have reported on the neo-Nazi movement’s embrace of digital culture, from its ubiquitous social media presence to its “nipster” (yes, a real slang term used in German media for Nazi hipster) tastes in clothing and music. Nipsters have made their own Harlem Shake video (complete with a sign holder urging viewers to have unprotected sex with Nazis), run a YouTube channel featuring young Nazis demonstrating vegan kitchen techniques, and are even championing environmental issues and women’s rights to court a wider base of followers.

Experts have noted that the German neo-Nazi presence on Tumblr and other social networking sites has become sleeker and more sophisticated. Neo-Nazi clothing has become more stylish and difficult to recognize. There’s even a vegan Nazi cooking show.

These are not the clever Brooklynites of the Hipster Hitler website, with their Death Camp for Cutie T-shirts and ironic Hitler mustaches. Hipster Hitler makes clear that they are not in the business of offending people (though it’s hard to believe they’ve succeeded on that front).

The Germans, on the other hand, are all about offending. Patrick Schroeder, the host of a popular neo-Nazi web series and Exhibit A in the Rolling Stone piece, wears a bandana that reads “H8” across his face to go with his T-shirt and jeans.

Germany’s domestic intelligence agency estimates that there are only 22,000 far-right sympathizers left in the country, far fewer than the 1990s. The National Democratic Party of Germany, the country’s largest and oldest far-right political party, is running out of money and its public demonstrations have been blocked in recent months by protesters.

However, the dwindling group is still considered dangerous and unapologetically racist. In response to Germany’s high intake of Muslim immigrants in 2014 (the country’s largest influx of immigrants in 17 years, with many coming from Syria and other perilous areas), neo-Nazis have teamed with anti-Islamic groups like PEGIDA, or the Patriotic Europeans against the Islamizations of the West. In October, 5,000 far-right extremists clashed with police to protest what they called the “Islamization” of Germany.

“The right-wing scene in Germany is militant, radical and dangerous,” Felix Benneckenstein, a former neo-Nazi, told NBC News. “And it is now experiencing an upsurge.”