Pomegranate juice a vehicle for Hasidic help and healing 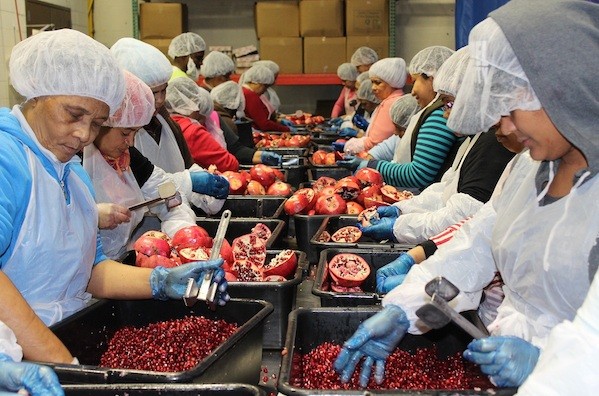 NEW SQUARE, N.Y. (JTA) – Get Rabbi Shulim Greenberg talking about the health benefits of pomegranate juice and he sounds like a homeopathic nutritionist — with a Yiddish accent.

Every January, the Hasidic charity Greenberg runs obtains some 40,000 pounds of California pomegranates (donated by Pom Wonderful, the nation’s largest pomegranate producer), squeezes them into juice and ships the product in eight-ounce plastic bottles to ailing Jews.

The recipients — mostly residents of the haredi Orthodox strongholds of Brooklyn, Lakewood, N.J., and New York’s Rockland County, where the New Square Hasidic village is located — apparently believe in the nectar’s healing powers.

“People think it heals, but it doesn’t heal,” Greenberg says on a tour of the juice production line during its annual two-week run in January. “It’s keeping the blood count up, mainly for people taking chemo. If the blood count is good, the body has strength to fight the illness.”

Many manufacturers of food and dietary supplements promote the supposed health benefits of pomegranates, which are high in antioxidants, and the fruit also occupies a prominent place in Jewish tradition. Pomegranates are said to have 613 seeds – the same as the number of mitzvahs, or commandments, in the Torah. Pomegranate decorations adorned the Holy Temple in Jerusalem and the robes of its high priest. Greenberg says there is also a reference in a medieval Jewish commentary to the fruit’s healing qualities.

But scant scientific evidence exists to establish these hypotheses as fact, and in 2010 the Food and Drug Administration issued a warning to the nation’s largest pomegranate juice manufacturer, Pom Wonderful, for making unproven claims about the fruit’s disease-fighting properties. 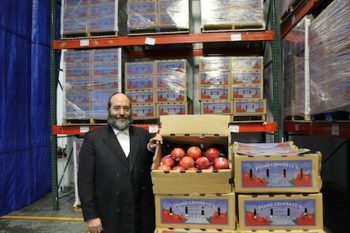 None of that has deterred Greenberg, who says his product differs from manufactured pomegranate juice in one small but crucial way: His juice is unpasteurized.

“Pasteurized is garbage,” Greenberg said of the heating process meant to kill bacteria and prevent spoilage. “The whole natural is out.”

Pomegranate juice delivery is one small part of Chesed 24/7, a $4.5 million charity that focuses on the Jewish sick. (Until a couple of years ago it was called Chesed of New Square; chesed is the Hebrew word for kindness.)

The charity has 16 “chesed rooms” in hospitals in New York and New Jersey where patients and family members can find kosher food and sundries, and an apartment near Columbia University Medical Center for family members who need to stay near patients. The group also delivers free home-cooked kosher meals by request directly to hospital rooms, provides Medicaid-funded day programs for developmentally disabled Orthodox Jews, and runs free shuttle services between hospitals and Chesed’s home base in the New Square area, about 30 miles north of midtown Manhattan.

The organization was founded 25 years ago by volunteers in the village, where about 7,000 Hasidim affiliated with the Skverer sect live and where the poverty rate is about 58 percent, according to census data. The impetus for the organization came from Greenberg’s wife, Chavi, who started out helping a woman in New Square who did charitable work for the sick.

Most of Chesed’s budget comes via Medicaid funding: $3.45 million in 2012, plus another $600,000 in government grants, according to tax filings. But the organization also relies heavily on volunteers.

The meals Chesed delivers to hospital rooms are cooked in the kitchens of New Square homemakers who volunteer their time and the expense of buying the ingredients. The group’s Shabbat-in-a-box packages for hospital patients, which include Sabbath essentials, are packed by volunteer schoolchildren – sometimes as a birthday party activity. Aside from the group’s regular hospital shuttles driven by staff, some 150 volunteers using their own cars provide additional personalized pickup and drop-off service for community members traveling to and from hospitals – sometimes as far away as Boston.

The volunteers take their work seriously. Dispatchers keep track of the miles logged by the drivers, providing them with monthly updates. While most volunteers log 1,000 to 4,000 miles per year, two Chesed volunteer drivers last year each logged more than 30,000 miles.

“My husband gets up in the middle of dinner if he gets a call to go and drive someone,” New Square resident Baily Kaufman said of her husband, a Chesed volunteer. 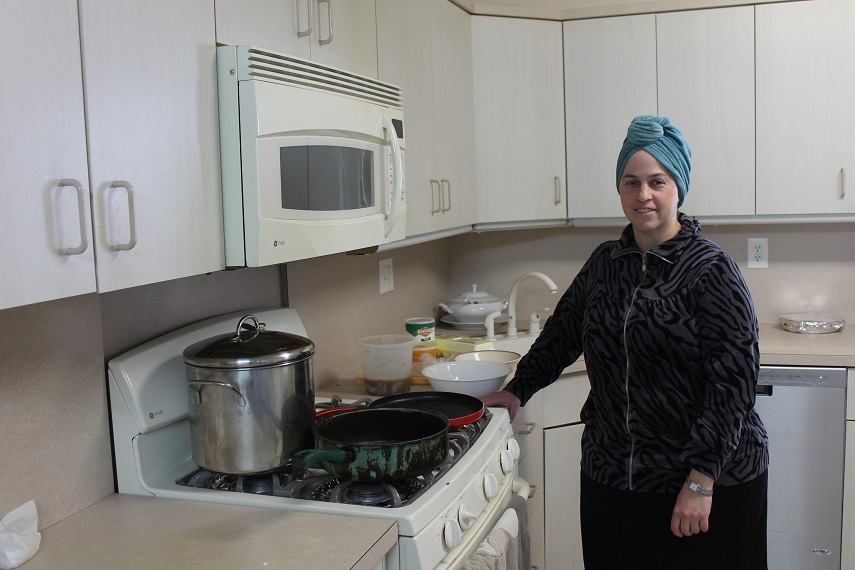 Gitty Biston is among dozens of volunteers in New Square, N.Y., who regularly cook meals for patients at hospitals in the region. (Uriel Heilman)

Gitty Biston, one of the dozens of women who cook meals for hospital patients, says she considers the four meals she makes per week an opportunity, not a burden.

“They’re doing me a favor by giving me an opportunity to do a mitzvah,” she told JTA.

Biston found herself on the receiving end of Chesed’s largesse 14 years ago when her 3-year-old son was hospitalized after being struck by a van in her driveway.

“I didn’t have any heimische food,” she recalled, explaining that the hospital food was hardly edible, intended only for patients and was not heimische, or homey. “That’s when I saw what it is to sit in a hospital and not have food. When you get a package, you know you’re being cared for.”

Biston tries to put special care into the packages she makes, including beef or chicken, a starch like mashed potatoes or sweet noodle kugel, a vegetable and dessert, such as apple pie. If she packs chopped liver, she decorates it with cucumbers, tomatoes and red pepper in the shape of a flower. For soup, she packs two types of croutons.

And like many of the volunteers, she includes little notes for the anonymous recipients. “A little something to sweeten your day” might be attached to a chocolate dessert, for example.

“I want to make sure when the patient gets the food they should have something to look at,” Biston said. “Anything that distracts their mind a little is good for them.”

Now Biston, a mother of six who works in Chesed’s special-needs programming, has an ill adult son who has been losing weight for months for reasons unknown. When she requested a delivery of pomegranate juice, she said, the juice arrived within two hours.

The pomegranate operation also relies on donated work and materials. Volunteer girls in New Square affix the labels to the juice bottles. David’s Cookies, a dessert food manufacturer with a 160,000 square-foot plant in Cedar Grove, N.J., provides free space at its kosher facility for the juicing operation. And Pom Wonderful bears the expense of trucking in the hundreds of crates of donated fruit across the country from California to New York.

“Our mission statement is ‘Doing well by doing good.’ We’ve enjoyed putting that to practice with Chesed 24/7 for the last several years,” said Tom Rouse, Pom Wonderful’s vice president of sales for North America. “We believe strongly in the healthful benefits of pomegranates, and we celebrate any organization that brings joy to others by doing the same.”

The pomegranate seeding work is painstaking. Some 40 manual laborers working in two eight-hour daily shifts stand alongside a row of tables banging on pomegranates with kitchen mallets to release the seeds. Before bringing their bins to the juicers, they sift through the ruby-red kernels to weed out any stray membrane – a process that is repeated by a rabbinic supervisor wearing a plastic beard protector. His concern is not kashrut but quality control.

In the early years of the pomegranate operation, Chesed used manual juicers to produce the liquid. Now a modified machine designed to grind beef gently presses the kernels to release their juice into a large vat, spitting out the bitter dross generated from the centers of the kernels into waste buckets.

Once the juice is bottled, the bottles are placed in a subzero freezer in a rented facility in upstate New York until they are ready to be shipped. In all, the operation produces 20,000 to 25,000 juice bottles.

While most of the consumers are Orthodox Jews — Chesed has freezers stocked with juice bottles in Borough Park and Williamsburg in Brooklyn, Lakewood, Monsey, N.Y., and New Square — the bottles are available to anyone who asks, says Tzvi Miller, Chesed’s director of development.

“When someone’s in a hospital, we’re all brothers and sisters,” Miller said.