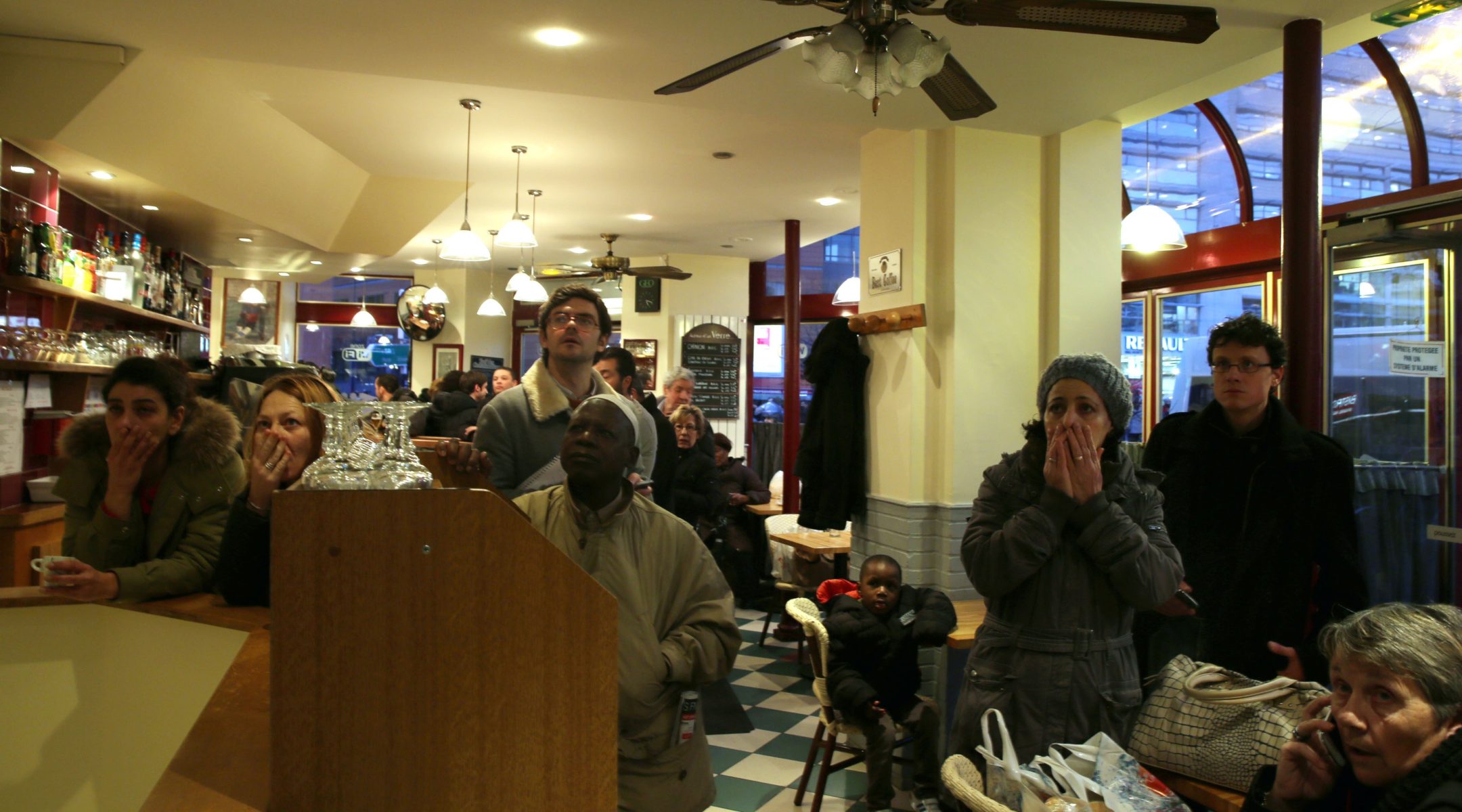 People watch on TV in a cafe as police mobilize at the hostage situation at Port de Vincennes on Jan. 9, 2015 in Paris, France. (Photo by Dan Kitwood/Getty Images)
Advertisement 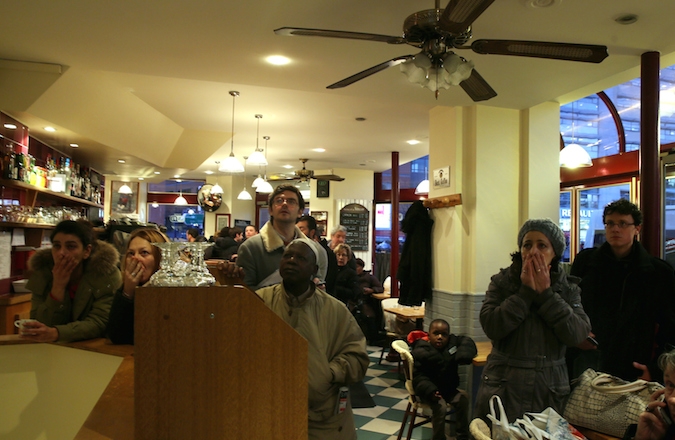 People watch on TV in a cafe as police mobilize at the hostage situation at Porte de Vincennes. (Dan Kitwood/Getty Images)

PARIS (JTA) – The two sieges that transfixed France and much of the world on Friday epitomize the problem Islamic radicalism poses in the heart of Europe: It’s a danger to civilized society generally, but especially to Jews.

Now it’s time for the authorities to wake up to the problem and confront it, French Jewish leaders said Friday, in the wake of a hostage crisis at the Hyper Cacher kosher supermarket at Porte de Vincennes in Paris’ 12th arrondissement. A gunman believed to have killed a Paris policewoman a day earlier killed four people and holed up in the store with at least 20 hostages. Five people were wounded in the attack, sources familiar with the investigation told JTA.

Meanwhile, the two brothers, Cherif and Said Kouachi, whom French police identified as having carried out Wednesday’s attack at the Paris offices of the Charlie Hebdo newspaper, which left 12 people dead, were cornered at a printing shop north of Paris.

“France is still under threat by those targeting it,” French President Francois Hollande said in an address Friday. “Unity is our best weapon. Unity to show our determination to fight against all that may divide us and first and foremost to be implacable when it comes to racism and anti-Semitism. Because today, in that kosher shop, it was a terrifying anti-Semitic act that was committed.”

Several thousand people gathered outside the kosher supermarket for a vigil Saturday evening to commemorate the victims of Friday’s deadly shooting.

On Sunday, Hollande and his prime minister, Manual Valls, are expected to attend a massive march through the center of Paris to commemorate the victims of those attacks. Israeli Prime Minister Benjamin Netanyahu and Foreign Minister Avigdor Lieberman are among several foreign leaders who confirmed their attendance at the march, the Israeli embassy in Paris announced Saturday. Press reports have said that more than 1 million people are expected. 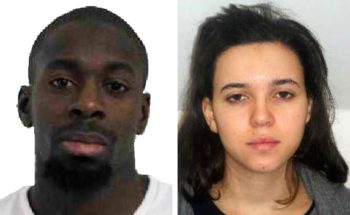 French police identified the captor at the kosher supermarket as Amedy Coulibaly, 32, and said that he was in contact with the Kouachi brothers. Police received threats that the hostages in the kosher shop would be killed if the brothers were harmed, Reuters reported.

Near day’s end, the two sieges ended almost simultaneously: Firefights erupted between the captors and the police, and the captors were killed — along with several hostages at the kosher supermarket. The hostage held by the Kouachi brothers was freed.

Among the dead were Yoav Hattab, a 21-year-old son of a Tunisian rabbi who now lives in the Paris suburb of Vincennes. The other victims were Yohan Cohen, 22; Philippe Braham, 45, and François-Michel Saada, who was 55. The French Jewish umbrella group CRIF, confirmed the names of the victims,  and the news site JSSnews.com reported their ages.

Wednesday’s attack at Charlie Hebdo, a satirical newspaper that drew admirers and detractors for provocative cartoon caricatures, was described by many in France as a national shock akin to 9/11. Tens of thousands of protests gathered in Paris after the attack to memorialize the dead and express their support for press freedom.

This week’s attacks come on the heels of a long period of increased anti-Semitic attacks in France that grew worse during last summer’s war in Gaza. Since then, synagogues have been set ablaze, Jews have been attacked and Jewish institutions have been threatened. In 2014, a record number of French Jews, some 7,000 people, left for Israel — many citing fears for their future in France.

In a statement Simone Rodan-Benazquen, director of the American Jewish Committee’s Paris office, citing a number of recent violent anti-Semitic attacks in France, said: “We have warned that the menace of rising anti-Semitism threatens French society at large. The Charlie Hebdo massacre makes clear that the war against France’s democratic values is in high gear.”

Despite assurances by the government was committed to fighting anti-Semitism, French Jews are facing the Islamic jihadists alone, said Chlomik Zenouda, vice president of National Bureau for Vigilance Against Anti-Semitism. “Thousands showed up to protest the Charlie Hebdo killings — that’s nice. But they gathered at a square where just a few months ago public officials stood idly as around them calls were heard to slaughter the Jews. No one came out to protest that – no one but the Jews,” said Zenouda, referring to the inflammatory rhetoric at Gaza War protests held last summer at Place de la Republique.

During Friday’s sieges, a local TV station, BFMTV, interviewed the captors both at the printing plant and the supermarket, and the men said they answer to al Qaeda in Yemen and that the two attacks were coordinated, Le Monde reported. They said they had ties to the American-Yemeni cleric Anwar Al-Awlaki, who was killed in 2011.

Police were in contact with the Kouachi brothers during the siege, and the brothers reportedly said they wanted to die as martyrs.

Near the supermarket site Friday, schools were put on lockdown or evacuated.

Paul Bernadini, a 22-year-old technician, said he was in a van near the supermarket listening to news on the radio about the Kouachi brothers’ hostage situation when he suddenly heard gunfire about 20 feet away and people screaming. He ran into a shop adjacent to the supermarket and took cover. 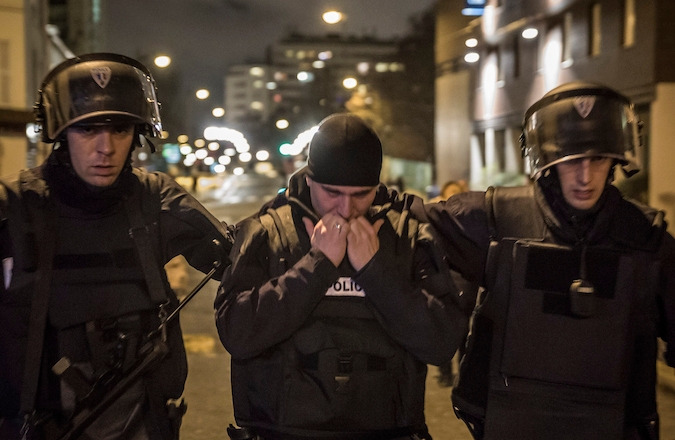 A police officer reacts has he is escorted from the scene following the hostage situation at Porte de Vincennes.  (Dan Kitwood/Getty Images)

“We heard a series of shots and knew it had to come from an automatic weapon,” he told JTA. “We heard the cries, but then we took shelter and we didn’t hear them anymore.

The Hyper Cacher market is located in a neighborhood on the easternmost edge of Paris, bordering Saint-Mandé — a heavily Jewish suburb, where there are many kosher shops and restaurants. Just a quarter mile away from Hyper Cacher is the century-old Synagogue de Vincennes, which long has catered to the community’s sizable Ashkenazi population. The synagogue sits adjacent to another Jewish congregation, Beth Raphael, founded in 2005 to serve to the growing population of Jews of North African descent.

In 2013, JTA reported on an incident in which France’s Jewish Defense League, a vigilante group, beat an Arab man after he reportedly attacked Jews in Saint-Mandé.

On Friday, Cours de Vincennes, usually a lively boulevard with a street market, was nearly abandoned. The only sound there was that of police convoys heading to the hostage site at the supermarket nearby. Meanwhile, police ordered the shops closed on the rue de Rosiers in Paris’ Marais district, a Jewish area where shoppers tend to proliferate in the hours before Shabbat.

As news of the hostage crisis spread, Jewish groups and institutions in the United States sent out urgent messages to constituents to pray for the hostages in France, attaching a list with nine Hebrew names said to be the hostages.

In France, some Paris synagogues canceled their Sabbath-eve services, a French Jewish official, Shlomo Malka, told Israeli Army Radio, according to the Times of Israel.

“There’s a huge amount of fear,” Malka said, according to the report.

The news of the Kouachi brothers’ deaths was greeted with relief in France after a two-day manhunt that police said involved a deployment of more than 88,000 police officers.

Some 15 hostages were freed after the raid, reports said.

Police were still searching Friday for the supermarket captor’s girlfriend, Hayat Boumeddiene, 26, who was also said to have been involved in the killing Thursday of the French policewoman in Montrouge, on the outskirts of Paris. 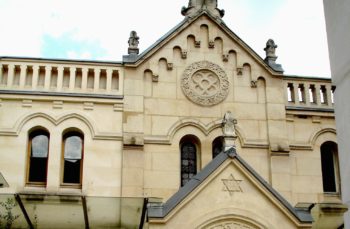 Later in the night, a third hostage situation developed in the southern French town of Montpellier. Two people reportedly had been taken hostage in a jewelry store, and police surrounded the area. It was not immediately clear whether the episode was an unrelated robbery or somehow tied to the hostage takings in Paris.

Shimon Samuels, the Paris-based director of international affairs for the Simon Wiesenthal Center, told JTA that France needs to face up to the danger posed by radical Islamists and recognize it for what it is, rather than excusing it away.

“A culture of excuse exonerates the perpetrators as disaffected, alienated, frustrated, unemployed,” he said. “No other group of frustrated unemployed has resorted to such behavior.”

Samuels called on the French government to declare a state of emergency that would give it sweeping powers to crack down on Islamist organizations. Other Jewish groups in France also have issued such calls.

In the United States, the Jewish Community Relations Council of New York announced it would hold a gathering of prayer, mourning and solidarity on Sunday evening in Manhattan in the wake of “the barbaric assault in France.” The meeting was scheduled for 7:30 p.m. at Lincoln Square Synagogue.