Among some Jews, little faith in French authorities 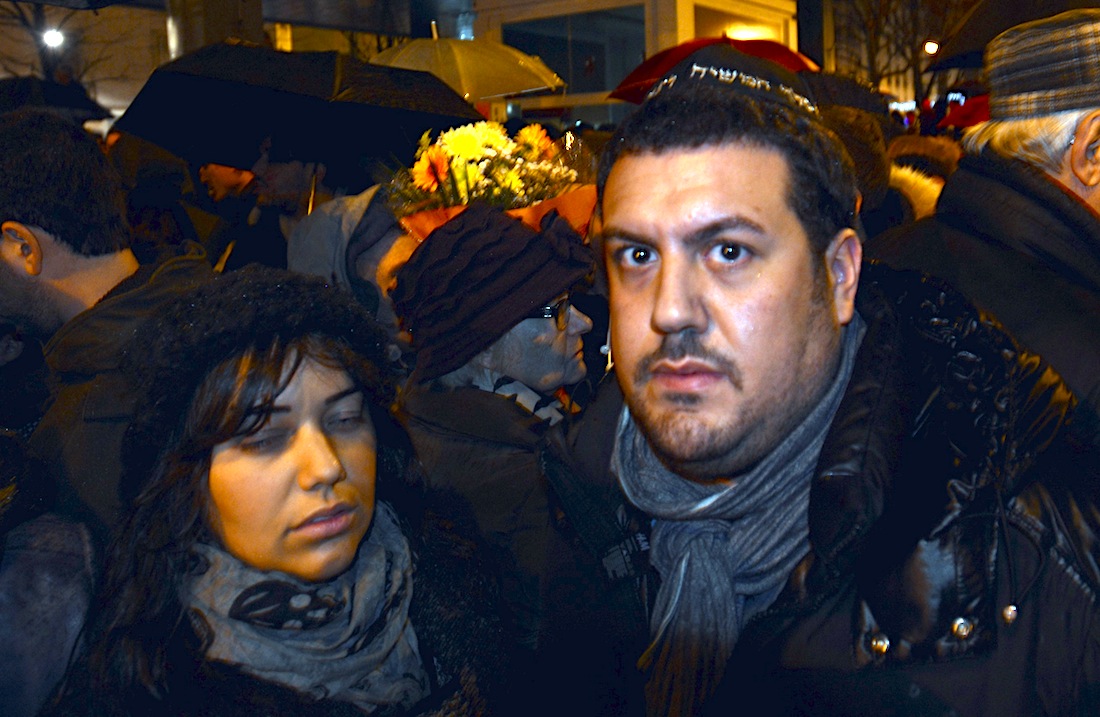 Joyce Halimi, left, and her husband Julien attending a vigil for victims of an attack on a kosher supermarket in Paris, Jan. 10, 2015. (Cnaan Liphshiz)
Advertisement

PARIS (JTA) — When he heard that four Jews had died in an attack on a kosher supermarket near his home, 16-year-old Natan Kalifa was overcome with grief, anger and a feeling of exclusion from French society.

He even contemplated staging an act of violence — possibly against Islamists who support the murders — he recalled Saturday at a vigil outside Hyper Cacher, the market where a 32-year-old jihadist took 21 people hostage and murdered four on Friday before he was killed by police.

Kalifa’s distress was somewhat diminished after hearing French Prime Minister Manuel Valls in a speech at the vigil reiterate his commitment to French Jews. But Kalifa said he still plans to leave France for Israel as soon as he graduates from high school.

“For France and the Jews who stay here, I hope Valls becomes president,” Kalifa said. “For me, I hope to be gone before the next elections.”

In the wake of an unprecedented spree of terror attacks in France last week that claimed 17 lives, many French Jews expressed appreciation for their government’s resolute stance against anti-Semitism. Nevertheless, they felt the response to be insufficient at a time when anti-Semitic violence is a daily reality that is already driving out record numbers of Jews.

“The government’s response is impeccable, but that is not the issue,” Serge Bitton, who lives in the heavily Jewish suburb of St. Mande, said at the vigil.

“The issue for the future of our lives here as Jews is how France reacts, not its government. And right now, France is reacting to Charlie, not to Chaim,” Bitton said of public outrage at the Jan. 7 attack on the offices of the satirical weekly Charlie Hebdo that killed 12.

Joyce Halimi, 26, attended the vigil with her husband, Julien.

“The government talks, but it’s only words,” she said. “We do not have a future here.”

The perpetrator of the Hyper Cacher attack, Amedy Coulibaly, 32, belonged to the same jihadist cell as Cherif and Said Kouachi, the brothers who staged the Charlie Hebdo attack, French police said. The cell reportedly was involved in efforts to recruit jihadists to fight in Iraq.

On Sunday, hundreds of thousands marched along with dozens of world leaders in defense of democratic values and in protest of the killings, including the slaying of a police officer by Coulibaly on Jan. 8.

Tellingly, leaders of French Jewry are openly discussing the feeling of insecurity after striving in the past to reassure their coreligionists and inspire them to stay and fight.

“There are thousands of French citizens fighting for jihad in Syria and Iraq. When they return to France, they are truly bombs with a time delay,” Roger Cukierman, the president of the CRIF umbrella group of French Jewish communities, said at a ceremony honoring the victims at the City Hall of St. Mande.

In an interview with Le Figaro, Cukierman called the increase in emigration from France to Israel a “failure for France” and said it owed to “growing insecurity felt throughout the country.”

French Jews, he added, “feel like the nation’s pariah.”

Rabbi Moshe Sebbag of the Grand Synagogue of Paris told Israel’s Army Radio that he estimated the attacks will result in a doubling of the number of immigrants to Israel in 2015.

“There is a tremendous feeling of insecurity and that these events will only worsen,” he said on Sunday.

Among the prospective immigrants this year is Sammy Ghozlan, a former police commissioner who founded one of the country’s most prominent watchdogs on anti-Semitism, the National Bureau for Vigilance Against Anti-Semitism, or BNVCA.

“The departure, it’s a message,” Ghozlan said in an interview about his decision published last week on JSSnews.com. “Leaving is better than running away. We do not know how things will play out tomorrow.”

BNVCA Vice President Chlomik Zenouda, himself a retired police major, spoke of a sense of fatigue.

“I have participated in many demonstrations, many marches, many vigils. The truth is I am getting tired,” Zenouda told JTA after the supermarket murders. “And another truth is that if it were not for my obligations at the BNVCA, I would leave for Israel.”

Part of the problem, he said, was that “police are under orders not to respond, so you see cat-and-mouse games that encourage offenders to test the limits and cross them.”

Zenouda was referring to violent rallies against Israel held over the summer in defiance of a ban by authorities.

“The firm use of force that exists in the United States against violators does not exist here, and that’s part of the problem,” he said.

“You can guard a synagogue, fine,” Zenouda said. “But you can’t put cops outside each kosher shop. You can’t assign police protection to each family before it goes shopping.”

“Look at this place, it’s like Gaza,” he said at the market of Aubervilliers, an impoverished and heavily Muslim suburb north of Paris where the mayor recently honored Marwan Barghouti, a Palestinian leader serving multiple life sentences in Israel for terrorist attacks.

In recent months, several French municipalities have conferred such honors on convicted Palestinians.

“Hollande can speak against anti-Semitism as much as he likes,” Azria said of French President Francois Hollande, “but when public officials hold up Barghouti as an example, we will see the result in blood on our streets, which are emptying of Jews.”