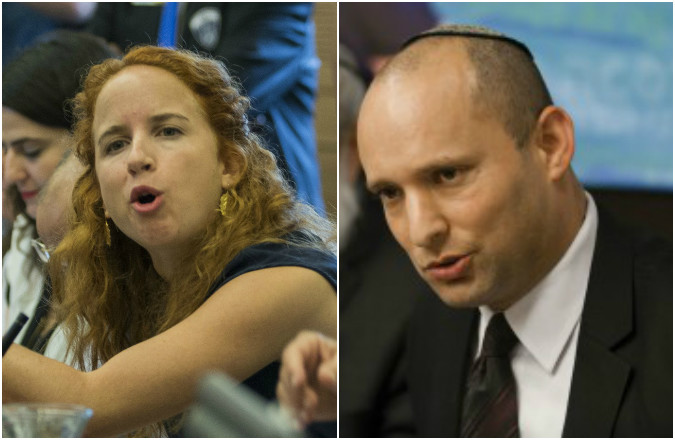 TEL AVIV (JTA) — Stav Shaffir was angry. The 29-year-old firebrand is known for her outbursts, which have gotten her kicked out of multiple Knesset hearings in the past year. But when she rose in the Knesset on Jan. 21 to answer Jewish Home party leader Naftali Bennett’s charge that she is post-Zionist, her rebuttal went viral.

“True Zionism, friends, is to distribute the budget equally among all citizens,” Shaffir said in an impassioned speech that has been viewed online more than 300,000 times. “True Zionism is to be concerned for the weak. True Zionism is solidarity — not only in war, but in the day to day, to watch out for one another. This is Israeliness. This is Zionism.”

Israel is no stranger to heated political rhetoric, but already the campaign in advance of the March 17 elections is shaping up to be a particularly fierce one, with the leading parties taking aim not merely at their rivals’ policies but at their very commitment to the ideals of the Jewish state.

Prime Minister Benjamin Netanyahu, facing the first serious challenge to his leadership since 2009, has attacked the Labor Party — the faction of Israel’s founders — as anti-Zionist. Labor has shot back, branding its recently forged alliance with the Hatnuah faction the Zionist Camp and presenting itself as a bulwark against the right.

The two rivals even have the same campaign slogan. Likud banners read “It’s us or them.” Zionist Camp ads proclaim “It’s us or him.”

“The Labor Party chose an extreme leftist and anti-Zionist list,” read a message posted on Netanyahu’s official Facebook page following the Jan. 14 Labor primary. “There’s no meeting point between the nationalist and responsible Likud outlook, and the irresponsible leftist list.”

In the last round of legislative balloting, in 2013, Netanyahu won reelection by a wide margin, taking 31 seats — 12 more than his nearest rival. This time around, Labor, which had just eight Knesset members as recently as two years ago, has seen a resurgence, with polls showing its joint slate with Hatnuah tied with Likud at 24 seats apiece.

Labor began the election season in December with a bombshell, merging with the centrist Hatnuah led by former Foreign Minister Tzipi Livni. Livni and Labor Chairman Isaac Herzog, presenting themselves as the anti-Netanyahu ticket, have hit the prime minister especially hard on foreign affairs, pledging to mend fences with the United States and Europe.

After Netanyahu pushed his way to the front of a Jan. 11 Paris rally that the French premier didn’t even want him to attend, Zionist Camp activists mocked him with a video game in which the object is to navigate the prime minister’s character past other heads of state to the front of the procession.

When Netanyahu last week accepted an invitation from House Speaker John Boehner to address a joint session of Congress in an apparent breach of diplomatic protocol — the Israeli prime minister never ran his plans by the White House — Zionist Camp leaders accused him of playing with the U.S.-Israel relationship for political gain.

“The fact that Netanyahu walks the streets of Paris with the leaders of the world doesn’t mean those leaders are with him,” Herzog said Jan. 15 in a speech in Haifa. “The essential alliance with the U.S. has great influence in the world. It’s on us to tighten it, strengthen it. The Americans demand mutuality, trust and partnership. Red lines have been crossed crudely.”

Netanyahu has gone tit for tat in the debate, portraying himself as standing up for Israel’s interests against enemies like Iran and friends like the French government and the Obama administration, with whom the prime minister has had strained relations. His address to Congress is scheduled for March 3, giving the prime minister a prominent podium to represent Israel internationally just two weeks before Election Day.

But even if Netanyahu’s popularity is floundering — just 42 percent of Israelis think he’s suited to be prime minister, according to a recent poll — there is safety for him in numbers. The party that stands to gain the most in the election is the pro-settler Jewish Home, which has run this year’s most energetic campaign and risen to third in the polls. More conservative even than Likud, Jewish Home is almost certain to join a Likud-led coalition.

“It’s clear I’ll support the leader of the right,” Bennett said in a Jan. 24 interview with Israeli Channel 10. “The question is whether it again will be as if [the coalition] will be right wing but will really be led by the left.”

Founded as a modern Orthodox faction, Jewish Home has broadened its appeal by downplaying its opposition to social reforms like same-sex marriage and naming several high-profile secular hawks to its list. The party has also latched on to Likud’s effort to challenge Herzog and Livni’s Zionist credentials, running with the slogan “We don’t apologize.”

Like Likud and the Zionist Camp, Jewish Home portrays itself as a broad party for Israelis of all stripes. But Israel’s political map remains as fragmented as ever. Likud and Labor are each slated to win about 24 of the Knesset’s 120 seats, while polls predict Jewish Home will take 16. Contending for the remaining spots are a handful of centrist parties eager to distinguish themselves from each other while still staying open to joining whichever party comes out on top.

Pop-up centrist parties are a trend in Israeli elections. In 2006, the newly founded Kadima was the Knesset’s largest party. In 2013, it was Yesh Atid. Now Kadima has disappeared entirely and Yesh Atid is middling in the polls.

In their place is Kulanu, a new centrist party founded by former Likud minister Moshe Kachlon that pledges to reform Israel’s economy. Kulanu, Hebrew for “all of us,” has focused its messaging on breaking Israel’s bureaucratic state monopolies, but it has also bolstered its diplomatic and security credentials by placing Yoav Galant, the former commander of Israel’s Southern Command, and former ambassador to the United States Michael Oren on its list.

Kachlon has avoided branding the party as left or right, saying he’ll join any coalition that shares his economic goals. Kulanu is polling at around nine seats — less than 10 percent of the electorate — but in Israel’s chaotic political scene, that could be enough to give Likud or Zionist Camp the votes necessary to form a government.

In a jab at the centrist Yesh Atid, currently the largest party in the Knesset, Oren said this month that being big is no guarantee of effectiveness.

“That they didn’t deliver,” Oren said, “was not a function of size.”