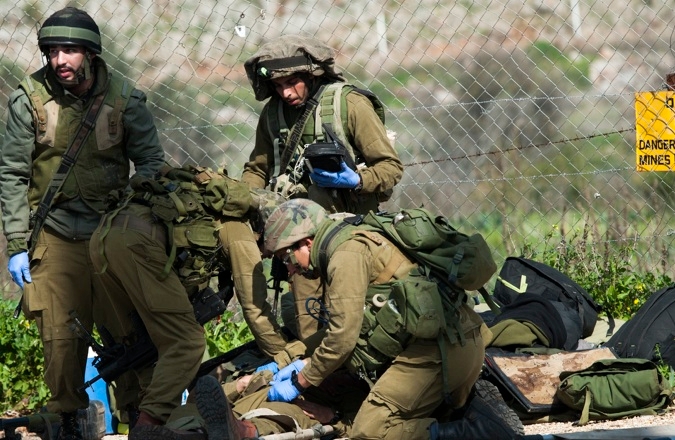 Israeli soldiers seen being taken care of when an Israeli army patrol came under anti-tank fire from Hezbollah operatives in the northern Mount Dov region along the Israeli border with Lebanon on Jan. 28, 2015. (Basal Awidat/Flash90)
Advertisement

TEL AVIV (JTA) — Two Israeli soldiers were killed and seven were wounded when a Hezbollah anti-tank missile struck an Israeli patrol on the Israel-Lebanon border.

Wednesday’s attack by the Lebanese terrorist group included shelling of Israeli army positions in Israel’s North, according to Israeli reports.

The Hezbollah attack came hours after the IDF struck a Syrian artillery post controlled by Syrian President Bashar Assad, scoring direct hits. The strikes were in response to two rockets that hit the Golan Heights on Tuesday.

“Last night’s [IDF strike] on Syrian territory against targets belonging to the Assad regime sends a clear message: that we will not tolerate any rocket fire into Israel or any infringement of our sovereignty, and that we will respond [to such attacks] forcefully and decisively,” Israeli Defense Minister Moshe Yaalon said Tuesday, according to the Times of Israel. “The Assad regime is responsible for the fire into Israel, and we will exact a heavy price from any government or organization that violates our borders.”

On Wednesday, according to Israeli reports, the IDF was searching for tunnels under its northern border dug by Hezbollah. Destroying a network of tunnels under the Israeli border with Gaza was one of the Israeli military’s main objectives last year in its war with Hamas.