From the Archive: Remembering — and not — the liberation of Auschwitz

Hundreds of Holocaust survivors and foreign dignitaries journeyed to Auschwitz last week to mark the 70th anniversary of the notorious Nazi death camp’s liberation. And media outlets from all over the world were there to document it.

Auschwitz today is the most potent symbol of the Holocaust. But at the time the camp was liberated — on Jan. 27, 1945, by the Red Army — it was given virtually no press coverage, at least not in the American media.

In fact, while both JTA and The New York Times had written about Auschwitz on multiple occasions in 1944, when relief organizations first began reporting on the atrocities there, neither outlet mentioned the death camp again until months after its liberation. And even those mentions were passing references, with no attention given to the liberation itself.

JTA’s first post-liberation reference to Auschwitz came on June 30, 1945, in a short article about 2,000 survivors “from such infamous places as Dachau, Buchenwald, Auschwitz, and Mauthausen” traveling to Tyrol, in western Austria, in hopes of immigrating to Palestine, Brazil, the United States and France.

Perhaps in the months and years after the war, Auschwitz’s liberation — and the grim scene found there by the Red Army soldiers — was eclipsed by other war-related news, particularly as the Jewish community became absorbed with the project of resettling hundreds of thousands of displaced people and building a Jewish state. Or perhaps it was too horrifying and painful to address so soon. Certainly it cannot be explained by the ignorance of Auschwitz’s horrors, since the 1944 reports offered a fairly clear picture of what was happening inside the electrical fences.

A June 1944 report by the World Council of Churches in Geneva, for example, noted “that travel conditions are such that many deportees die en route and that others are killed and cremated on arrival in Auschwitz.” That report estimated that more than 1.7 million Jews had been put to death and described the goings-on at Auschwitz and the adjacent camp Birkenau, which JTA paraphrased in a series of articles:

After a fortnight to three months’ imprisonment, during which they were “selected” or worked to death, the Jews were led to the execution halls. These halls consist of fake bathing establishments handling 2,000 to 8,000 daily. Prisoners were led into cells and ordered to strip for bathing. Then cyanide gas was said to have been released, causing death in three to five minutes.

A few days later, JTA reported on more details, including the practice of tattooing inmates and the failure to provide adequate clothing. 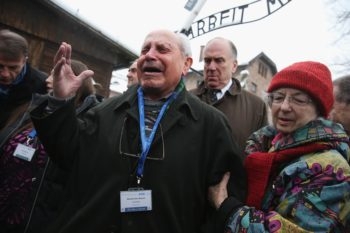 Mordechai Ronen, who was a prisoner at Auschwitz when he was 11 and lost his parents and sisters there, breaking into tears as he walks through the former concentration camp in Oswiecim, Poland, Jan. 26, 2015. (Sean Gallup/Getty Images)

In November, the United States War Refugee Board offered still more details based on eyewitness reports from two prisoners who had escaped Auschwitz and Birkenau, and of a “non-Jewish Polish army major who is the sole survivor of one group imprisoned at Auschwitz.”

The War Refugee Board report, as described by JTA, said that those caught trying to escape Auschwitz “were hanged in the presence of the whole camp,” described the “brutal” working conditions and told of the camp’s “biological laboratory” where “SS, civilian and internee doctors performed ‘experiments’ on Jewish girls and women.”

Whatever the reasons, it took several years for anyone to commemorate the anniversary of liberation — or at least for any such commemoration to garner media coverage.

The first one on which JTA reported came in 1951, with 50,000 people at an Auschwitz ceremony mentioned in a larger article about other commemorations in Europe, including one for the eighth anniversary of the Warsaw Ghetto Uprising. At that early Auschwitz liberation ceremony organized by the Polish government and delegations from Czechoslovakia and Hungary, JTA noted that “only a handful of Jews … were reported present.”

It would be seven years before another Auschwitz commemoration was reported, when delegations “from many European countries” participated in the 13th anniversary. Citing Folkstimme, the “only Yiddish daily” remaining in Poland, JTA reported, “After memorial services, a wreath was laid on the wall of cell block 11 where most of the executions took place.”

Liberation’s 15th anniversary was given more press coverage, with “about 15,000 persons from 13 countries — many of them Jews,” joined by about 20,000 Poles, attending “solemn ceremonies” at Auschwitz.

However, it was not until liberation’s 50th anniversary, in 1995, that it began receiving significant attention, no doubt aided by the fall of the Iron Curtain, which made it easier for visitors to travel to Poland.

Not all the attention was positive. As JTA reported, the two days of 50th anniversary commemorations were “marked by conflicts between Jews and Poles as to how Auschwitz should be remembered”:

In its official plans for last week’s events, the Polish government had scheduled highly ecumenical ceremonies, which according to Jewish critics, memorialized Auschwitz as a universal symbol of man’s inhumanity to man, without paying tribute to the uniquely Jewish dimension of the suffering.

Some Jewish groups had also accused the Polish organizers of trying to “Polonize” or “Christianize” Auschwitz.

Ninety percent of Auschwitz victims were Jews killed as part of the Nazis’ Final Solution. For Jews as well as for most of the world, Auschwitz has become the paramount symbol of the Holocaust.

At least 70,000 Roman Catholic Poles were also killed there, and Poles generally view Auschwitz as the symbol of Polish suffering under the Nazis.

Indeed, an American Jewish Committee survey released shortly before the anniversary found that 40 percent of Polish respondents believed that ”both Poles and Jews suffered equally from Nazi persecution” and had a “romanticized conception” of how Poles acted toward Jews in World War II.

Conflicting understandings of the Holocaust spurred Jews to stage “their own separate memorial ceremony on Jan. 26 [in 1995] as a supplement to the official program.”

By the 60th anniversary in 2005, when JTA published a series of “60 Years After Liberation” articles and the ceremony at Auschwitz attracted 1,000 survivors and more than 40 heads of state, Polish-Jewish relations had improved:

Today, Poles not only celebrate the heroism of citizens who risked their lives to rescue Jews but have begun to accept that some Poles participated in the killing — and that most Auschwitz victims were Jews.

Some 1.3 million people died in Auschwitz, about 1 million of them Jews. In 1995, however, the Polish government was still so uncomfortable about stressing Jewish suffering at the camp that at first it barred a group recitation of the Kaddish, Rabbi Andrew Baker, director of international affairs for the American Jewish Committee, recalled at a dinner Wednesday.

This year, the program was organized by Jewish groups and included prayers …

[Baker] also called [Aleksander] Kwasniewski, the Polish president, “one of the most eloquent voices on Polish-Jewish relations.”

Kwasniewski publicly apologized for the events at Jedwabne, Poland, where Poles helped Germans murder the local Jewish population. The story of Jedwabne was uncovered in 2001 and threw Poland into turmoil.

“Jedwabne opened up a very bad wound in Polish society with regard to their share in the murders,” [a leader at Israel’s Holocaust memorial, Yad Vashem] told JTA.

“President Kwasniewski believes that coming to terms with the truth is an essential part of building a democratic society.”

What will happen at the next major anniversary, in 2025? One thing we know for certain: At the 80th anniversary, the youngest remaining survivors will be over 90, meaning it may very well be the last ceremony in which any witnesses are present.