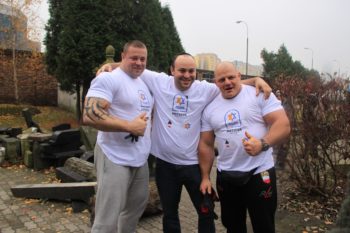 Jonny Daniels, center, with Polish Strongman Federation members in 2014. (Photo courtesy of From the Depths)

WARSAW, Poland (JTA) — A Polish federation of strongmen announced its partnership with an organization whose work includes moving and preserving Jewish headstones.

The cooperation between the From the Depths commemoration group and the Polish Strongman Federation began last year, when two of the sport club’s athletes helped move two headstones from the garden of a resident of Warsaw, the two groups said in a statement issued Sunday.

“We knew immediately that we wanted to be involved and help however we can,” said Tomasz Kowal, former champion of the Polish Strongman Cup who participated in the removal of the two 550-pound headstones last year.

The partnership means that “all of our strongmen from around Poland will be ready at a moment’s call to help From The Depths and their holy work,” added Kowal, who weighs 286 pounds and can lift 859 pounds.

During and after the Holocaust, countless Jewish headstones were used in Poland for construction, pavement and even decoration. Some of those headstones — many of them dilapidated or brittle — are inaccessible by vehicles, making manual lifting the safest and most practical way of moving them to a place where they can be loaded onto a vehicle to be transported to the Jewish cemetery, where they were taken or to another cemetery.

Several strongmen will assist From the Depths this year to return dozens of Jewish headstones that were used to build a river dam, said Jonny Daniels, the British-born Israeli who founded From the Depths last year.

The strongman federation’s willingness to help is part of growing awareness in Polish society of the issue of restoring Jewish heritage sites in Poland, according to Daniels.

“We have cooperation with local fire departments, nuns, communities,” he said, adding that seeing athletes like Kowal help out “does a great deal to combat fear individuals may have in returning the tombstones.”