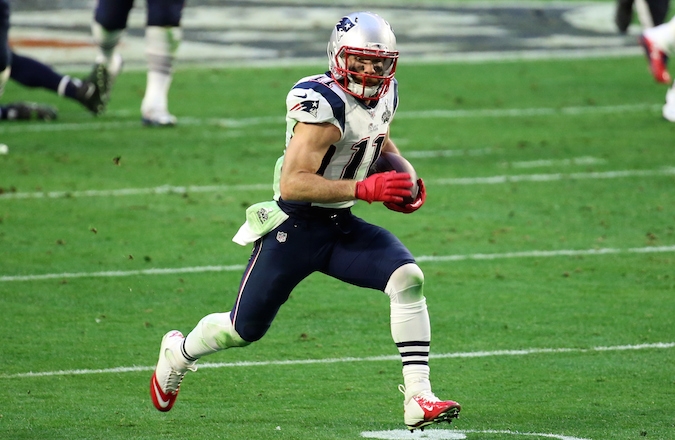 Julian Edelman runs for a first down in the second quarter against the Seattle Seahawks during Super Bowl XLIX at University of Phoenix Stadium on Feb. 1, 2015 in Glendale, Ariz. (Andy Lyons/Getty Images)
Advertisement

(Updated) During the Super Bowl Sunday night, many Jews across the country no doubt had the same question: Is Patriots wide receiver Julian Edelman Jewish?

Edelman had an excellent game Sunday night, catching nine passes for 109 yards and a touchdown in New England’s dramatic comeback victory over the Seattle Seahawks. He also happens to have a Jewish-sounding name.

But is he actually a member of the tribe?

While his father has Ashkenazi roots, this is what Edelman had to say on the topic on a media day before his previous Super Bowl appearance with the Patriots in 2012:

“Well, I’m not completely Jewish, if you know what I mean. I know people want me to be. My father is Jewish. My mother isn’t. I’ve been asked this before. I guess you could say I’m kind of Jewish but not really.”

For the record, while traditional Jews believe one must have a Jewish mother or convert in order to be considered Jewish, both Reform and Reconstructionist Jews recognize patrilineal descent.

In an interview with the NFL Network last season, Edelman asserted more clearly that he is in fact Jewish. When asked for some “good Christmas answers” to questions from one broadcaster, Edelman said, “Well, I’m Jewish, but I’ll try to keep it to Hanukkah presents even though Hanukkah’s over.”

Here are a few facts about the Patriots’ Jewish (or not) star receiver:

He played quarterback in college.

Before shifting to wide receiver in the pros, Edelman was a quarterback for a year at the College of San Mateo in California and three years at Kent State. During his senior year at the Ohio school, he also led the Golden Flashes in rushing yards. No word on whether he also showed up at the campus Hillel.

He was not expected to do well in the pros.

Scouting reports from 2009, the year Edelman entered the NFL draft, called him too small and said he would not be a high-impact player. Edelman was not even invited to participate in the NFL Combine, a show of physical tests for professional scouts. He was drafted in the seventh and final round.

His father (not exactly your stereotypical American Jewish dad) became an auto mechanic at age 14 but pushed him to succeed.

“My dad was just a little trailer trash white dude that worked his tail off, didn’t have a dad. He started working at 14, didn’t get to play sports. He dedicated his life to his kids to let us live our dreams. I love my dad.”

ESPN ‘s Jackie MacMullan expanded on the influence of Edelman’s father, who pushed the future star to tears while training him.

His teammates nicknamed him “squirrel.”

Not much to explain here except that Edelman is noted for his constant hustle and energy.

It is worth pointing out that Edelman is not even the only Jewish player on the Patriots — backup safety Nate Ebner’s father was a Sunday school principal at Temple Shalom in Springfield, Ohio. In addition, team owner Robert Kraft is Jewish and, a week before the Super Bowl, spoke at an event honoring the rabbi of a Brookline, Mass., synagogue. (Kraft’s speech starts at 28:00.)

Who knows? Maybe Tom Brady’s menorah will inspire Edelman to become more involved with his Jewish side.