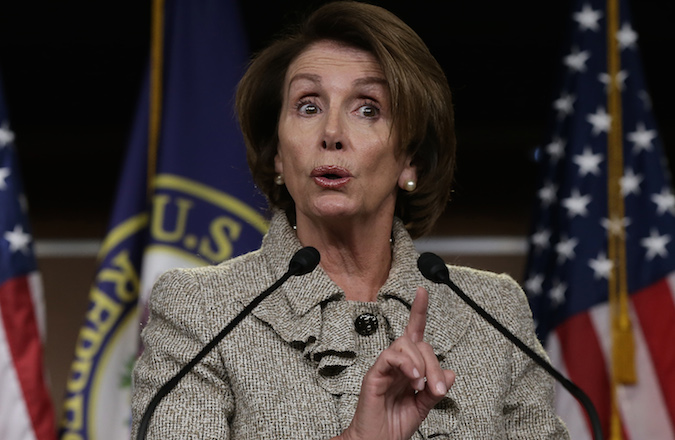 Rep. Nancy Pelosi (D-Calif.), the minority leader in the U.S. House of Representatives, met Wednesday with Yuli Edelstein, the Knesset speaker who is on a U.S. visit. She likened the circumstances of Netanyahu’s agreeing to speak to Congress on March 3 to “casting a political apple of discord into the relationship” between Israel and the United States, Pelosi spokesman Drew Hammill said.

The meeting was the latest wrinkle in tensions arising from House Speaker John Boehner’s Jan. 21 invitation to Netanyahu to address Congress on Iran’s nuclear program and the talks underway between world powers and the Islamic Republic. The White House had not been informed of the invitation, as is protocol.

Netanyahu believes the talks will result in a bad deal and wants stricter sanctions placed on Iran. President Barack Obama opposes further sanctions while the talks are ongoing.

Edelstein, a member of Netanyahu’s Likud Party, had met separately on Wednesday with Boehner (R-Ohio). Israeli officials hastily arranged a meeting with Pelosi when they realized that she had not been invited to the meeting with Boehner.

Boehner had arranged the speech with Ron Dermer, Israel’s Washington envoy, who agreed to keep the speech a secret from the Obama administration and Democrats for nearly two weeks. Boehner timed the invitation for the day after Obama’s State of the Union speech.

Dermer met separately on Wednesday with seven Jewish Democrats in the office of Rep. Steve Israel (D-N.Y.), who headed up the Democratic Congressional Campaign Committee during the last two election cycles.

“I organized the meeting with Ambassador Dermer, and I invited key Congressional Democratic supporters of Israel to attend,” the congressman said in an email. “There were a wide range of views that were discussed, but one thing we all agreed on emphatically is that Israel should never be used as a political football.”

An official present at the meeting who spoke anonymously because of its sensitivity said it was “spirited” and that the Jewish lawmakers — all notable for their considerable congressional support for Israel — told Dermer that insisting on the speech was allowing style to trump substance in the important matter of keeping Iran from obtaining a nuclear weapon.

Dermer made the case, as he has elsewhere, that the importance of Netanyahu’s message about the threat posed by Iran was key to understanding why the prime minister insisted on going ahead with the speech.

Democrats who have been part of the recent exchanges with Dermer have complained of a tone-deafness in how Israel has handled the crisis. They say they are well aware that Israel perceives a nuclear Iran as an existential threat, and repeated explanations by Dermer and others convey the impression that the Israeli officials think Democrats are stupid.

They also are taken aback by how Dermer has justified the speech by comparing it to phone calls that David Cameron, the British prime minister, made recently to individual U.S. senators to oppose new sanctions. Netanyahu routinely makes such calls, they say; a speech to a joint meeting of Congress is on a completely different level.

Politico reported that some Democrats may not attend the speech. Rep. Steve Cohen (D-Tenn.), who is Jewish, told the newspaper that he was still deciding. Along with Reps. Maxine Waters (D-Calif.) and Keith Ellison (D-Minn.), Cohen is circulating a letter among Democrats that would urge Boehner to postpone the speech until after Israel’s March 17 election and after the Senate considers new Iran sanctions.

In her media briefing the same day, Pelosi said she wanted to attend but noted that in the past, lawmakers have snubbed unpopular foreign leaders by sending low-level staffers in their stead.

“You have to fill those seats, and sometimes it looks like the average member of Congress is 21 years old,” she said.

Obama has pledged to veto new Iran sanctions, which Republicans back. A key group of Senate Democrats say they will delay consideration of the sanctions until a March 24 deadline for the outline of a deal between Iran and the major powers that would swap sanctions relief for guarantees that Iran is not advancing toward a nuclear weapon.

Pelosi said the bad blood engendered by the speech is “really beneath the dignity of the challenge that we have stopping the proliferation of weapons of mass destruction.”

Obama administration officials have pledged not to meet Netanyahu during his visit, also timed for the annual American Israel Public Affairs Committee conference, because doing so would be inappropriate so close to Israel’s vote.

That places Vice President Joe Biden, who is close to Netanyahu, in a potential predicament. As an official of the administration, he is bound not to meet with Netanyahu; as the president of the Senate, he would join Boehner in presiding over a joint meeting of Congress.

Josh Earnest, the White House spokesman, said Wednesday at the daily media briefing that it was not clear yet whether Biden would attend, although he noted that Biden enjoys his congressional responsibilities and has presided at all but one joint speech to Congress by a foreign leader.

Earnest said the speech was helping to create an impression that Netanyahu had a relationship with Republicans at the expense of Democrats.

Asked if the White House would encourage Democrats to attend the speech, Earnest said, “The president believes that individual members ought to decide for themselves. “