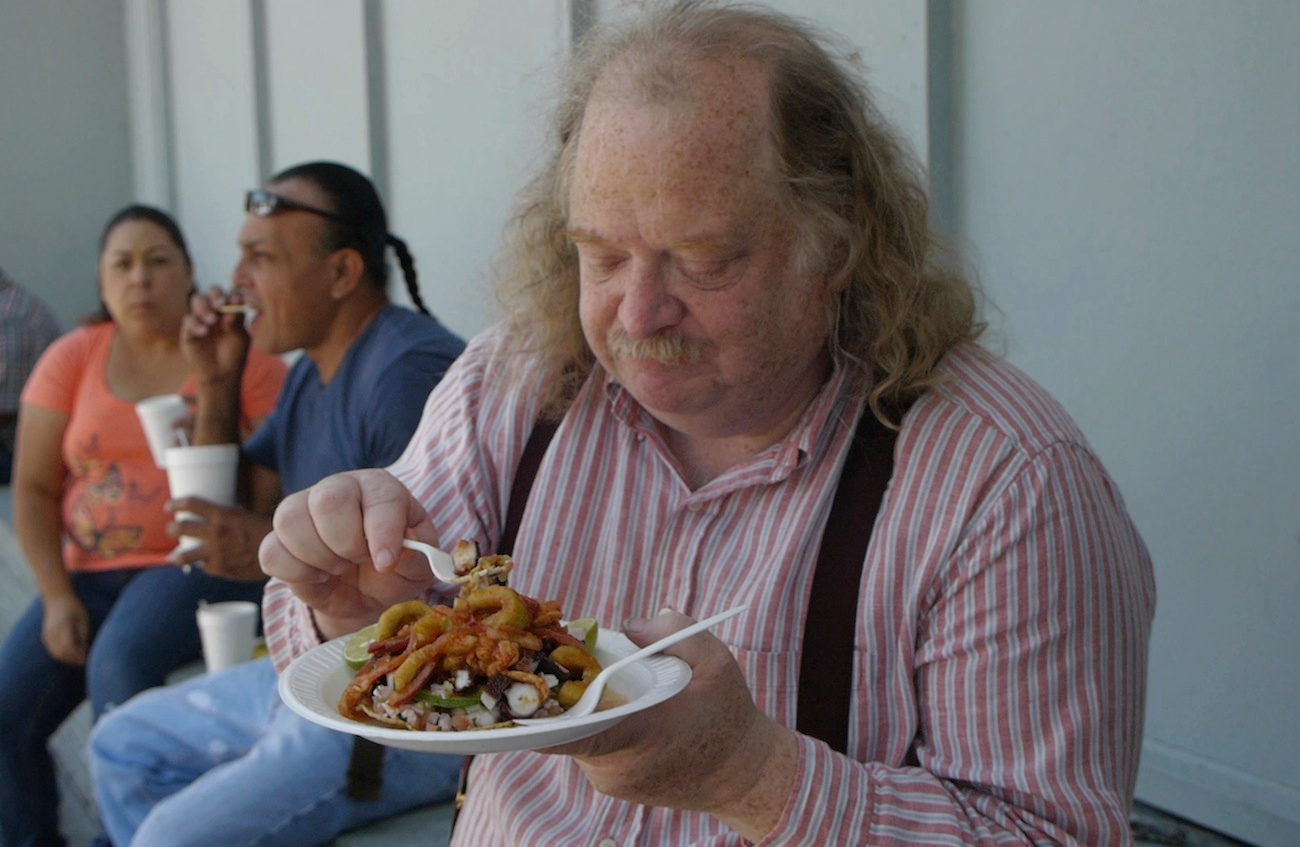 Jonathan Gold digs into a Poseidon Tostada from the Mariscos Jalisco taco truck. (Courtesy of 'City of Gold')
Advertisement

PARK CITY, Utah (JTA) — If you live in Los Angeles and care about food, you already know Jonathan Gold, the Pulitzer Prize-winning restaurant critic for the Los Angeles Times.

You may have traced one of his pithy reviews to a mini-mall in the San Gabriel Valley for Sichuanese hand-torn noodles, or to an unromantic stretch of Hollywood Boulevard for blood-thickened Thai boat noodle soup, or to Compton for succulent barbecue, or to one of dozens of other neighborhoods far from Rodeo Drive or Venice Beach and other icons of Los Angeles culture.

In eating your way down the trail he has blazed, you may have acquired a taste for a different notion of Los Angeles, for the city as a mecca to which the foodways of East and West, both high and low, all make hajj to tell their story upon your palate.

“City of Gold,” a documentary by Laura Gabbert that premiered Jan. 27 at the Sundance Film Festival here, is a dual portrait of both Gold and the city he loves. The camera follows him as he roams from restaurant to restaurant analyzing the food, pointing out subtleties in the metropolitan texture and philosophizing upon the nexus between food, culture, history, geography and anything else that comes to mind.

As Gabbert and Gold lucidly demonstrate, Los Angeles, far from the sprawling, undifferentiated mass derided by its critics, is a multicentric metropolis defined by its many variegated neighborhoods and enclaves. And as Gold explains in his wanderings around the city, it is this profusion of subcultures and their intermingling that create the essence of the city.

“It’s this incredible mosaic of neighborhoods, and in a very real way, food is the best way to experience that,” Gold told JTA.

Restaurant critics are famous for the lengths they take to maintain anonymity, but Gold renounces the tradition in the movie — and in a recent  essay on the subject, where he admits that his identity has long been an open secret in the restaurant world — to reveal his true, or at least his physical, self. He is pale and freckled and rotund — the last being the result, he jokes, of eating his way through so many bad restaurants in search of the good ones. Hardly schlubby, Gold carries himself grandly, almost regally, with a long shower of blond hair to his shoulders, matched by a small mustache. 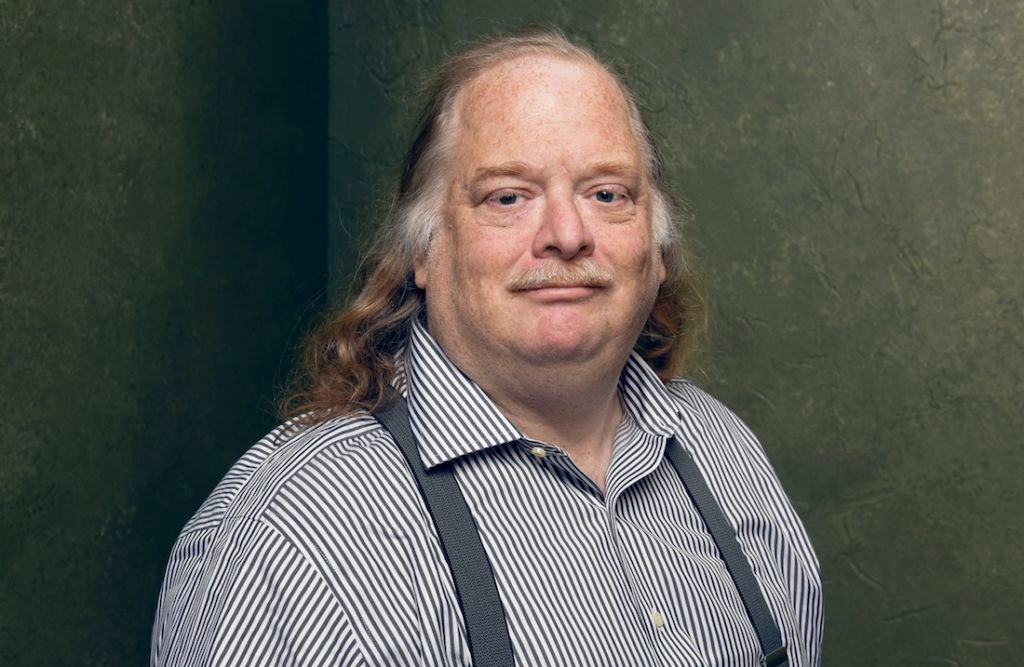 He has a remarkable palate — in a recent interview, Gold noted in passing that water from the cooler was a tad bitter — and a knack for a vivid turn of phrase, as when he described the critic’s search for anonymity as being “like the fat man’s version of the ‘Bourne Identity.'”

A Los Angeles native, Gold grew up in in a liberal, Reform Jewish household surrounded by books and culture, and with a father whose “idea of religious observance was to drop us off at the shul for religious school and then go get a lot of deli, come back and pick us up.”

His mother, who came from a Louisiana family and converted to Judaism when she married, could cook a few Southern specialties, but in Gold’s words, “There was a lot of Hamburger Helper and Kraft dinners and fried chicken and this kind of Jell-O she learned to make where she put in a little bit of orange sherbet.”

Gold first began to expand his tastes in high school when he dated an Asian-American girl whose mother cooked traditional Chinese four-course dinners.

As a young man, Gold began to explore the city in earnest. While working as a proofreader at a legal newspaper, he decided to eat his way down the length of Pico Boulevard. What started as a lark became an education in urban culture.

“You’d notice that somebody would be selling tamales out of a cart, and then you’d run into them a few months later and they’d have a little grocery store with some Salvadoran stuff on the shelves, and then maybe they’d start selling pupusas over a counter, and then it became a full-fledged pupuseria, and you’d see culture unfolding in real time,” Gold said. “It was fascinating. It was a really interesting way to learn about Los Angeles.”

Gold slowly transitioned from proofreading into writing, first as a music reviewer — Gold majored in music at UCLA — for the LA Weekly newspaper, where he profiled his classical music heroes like Philip Glass and Pierre Boulez. When the owner of the paper asked him to review restaurants, Gold agreed because he was behind on his rent.

“I turned out to like that,” he recalled. “I thought it was kind of a scam, and it turned out to fit in with my writing style really well.”

Gold’s reviews quickly attracted widespread notice, and he began to write for the Los Angeles Times, Gourmet and other outlets. In 2007 he became the first — and to date only — food critic to win a Pulitzer Prize.

Gold’s erudition on food, spices, history and geography is staggering, yet in traveling the city in “City of Gold” and listening to Gold talk, it becomes obvious that he is describing not simply restaurants and neighborhoods but the entire process through which people combine ideas and spices to create a new culture and a new city. Food is simply the most delicious way to sketch that evolution.

He added, “There are worlds to be explored in a single taco.”