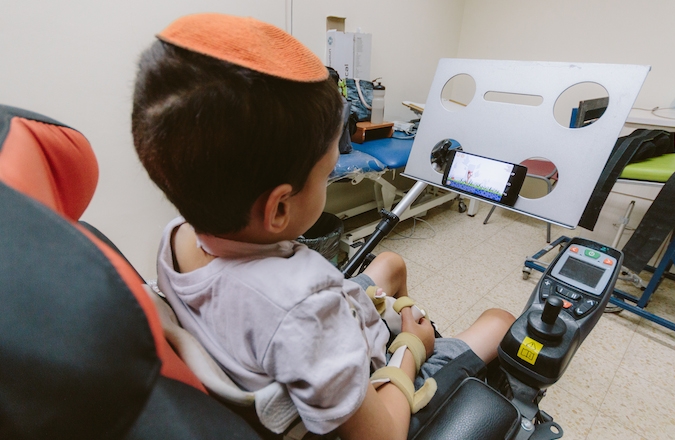 The Jewish community must go beyond merely making its own institutions inclusive of the disabled, William Daroff and Lynne (Basti Hansen)
Advertisement 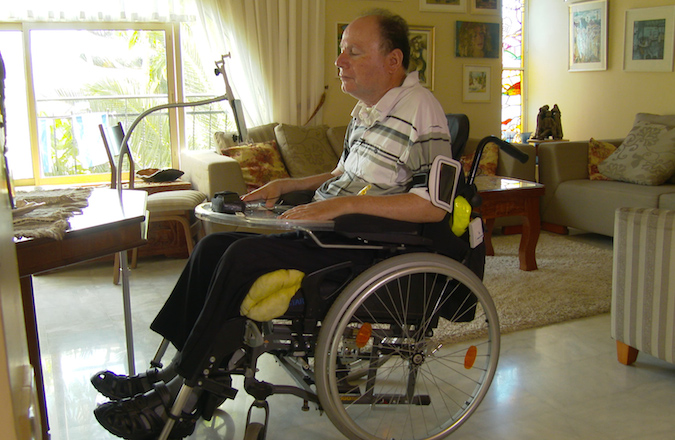 But for the 65-year-old quadriplegic, who lost all but the smallest movements in his neck in an accident nine years ago, that small act of spousal romance was out of reach.

He was determined to change that.

Livne is the co-founder of Sesame Enable, an Israeli company building what is believed to be the first completely hands-free smartphone. The Sesame Phone is designed for people with spinal cord injuries, ALS, cerebral palsy or other disabilities that hamper the use of hands and arms — a population that has been on the outside looking in at the smartphone revolution.

Three years in the works, the Sesame is a Google Nexus 5 Android smartphone that comes equipped with proprietary head-tracking technology. An advanced computer vision algorithm and the phone’s front-facing camera track user’s head movements and allow them to control a cursor on screen. The cursor is essentially a virtual finger, letting users do what others can with a regular smartphone.

Sesame recently won a Verizon Powerful Answers Award, which came with $1 million in prize money. The company previously received a grant from Israel’s Office of the Chief Scientist, which was matched by a private angel investor.

Meanwhile, the company is using the $38,000 it raised from a recent crowdfunding campaign — the Indiegogo video showed Livne using the phone to order flowers for his wife — to donate Sesame phones to people in its target market. At approximately $1,000 per phone, Livne plans to give away about 30 phones to people with disabilities nominated by their peers. The five recipients so far include a former Israeli soldier who was injured in the Entebbe raid of 1976 and a little boy in the United Kingdom with muscular dystrophy.

Prior to the phone’s development, Livne said he was “completely dependent” on people around him. Simple things like making a phone call — no less a private one — were no longer possible, as someone needed to dial, hold the phone and hang up for him.

“My life quality jumped from the Stone Age to the smartphone age,” he said.

Now Livne regularly texts and sends WhatsApp messages to his friends and three children, and the phone has helped ease some of the social isolation experienced by many disabled people, especially the young.

“Disabled people are the largest and loneliest population in the world,” said Jay Ruderman, president of the Ruderman Family Foundation, which advocates on behalf of people with disabilities in the Jewish community.

A smartphone is not just a window into the social world; it’s necessary for many lines of work. The U.S. Bureau of Labor Statistics has reported that only 17.6 percent of persons  with a disability are employed.

“We live in an age where you have to use technology to compete and function in the workforce, and if that technology isn’t built in a way that allows you to participate, you are essentially frozen out of the workplace,” Ruderman said. “This isn’t just for one individual; we are talking about millions of people around the globe in the same situation.”

Livne came up with the idea for Sesame after seeing a TV demonstration for a game controlled with head movements. With a background in electrical engineering, he immediately recognized the technology’s potential to help him.

“Being [an] engineer, and especially an electrical engineer, I had so much envy for the people who could use the new gadgets, and my engineering mind helped me come up with the idea,” he said.  “When I saw them playing the game with head gestures, it just clicked to me.”

He called up the TV station, which put him in touch with the game’s designer, Oded Ben Dov. Turns out Ben Dov and Livne lived just three blocks from each other.

After meeting with Livne, Ben Dov closed his software house and began working on Sesame.

“Once I met with Giora, my focus switch was pretty immediate, said Ben Dov, who has a background in mobile development and computer vision. “I realized there was a real need.

“With games, you can make 1,000 of them,” he said, shrugging. “But here there was a real use for this technology.”

Ben Dov said the first phones that were ordered via Indiegogo will be shipped in March, and a larger tablet version will be released later this year. 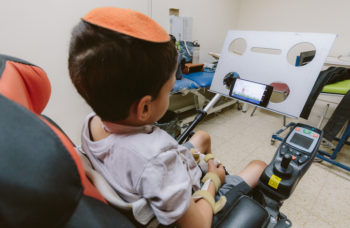 Sesame is just one of many Israeli technology start-ups in a country hailed as the Start-Up Nation. And Ruderman said there is a growing emphasis on creating technology solutions for people with disabilities. Notably, the Israeli company Voiceitt recently developed an application called Talkitt that enables those with motor, speech and language disorders to communicate using their own voice.

Where Sesame differs from Talkitt and the ultra-popular Israeli tech products like Viber and Waze is that it is not an application. Because Sesame’s software controls the whole phone, the company needed to gain something called root access so it could preinstall the technology in its labs and sell the phone touch-free out of the box.

The step is necessary, although one that keeps Sesame’s operational costs high.

“Since our users couldn’t operate a phone before, it’s not really a question of them just downloading an app because they didn’t have a phone to begin with,” Ben Dov said. “The first phone they buy will be the touch-free Sesame Phone.”

It’s an exciting prospect for some like Jacob Williams, a seventh-grader who was in a car accident when he was six weeks old and has been a quadriplegic and on a ventilator ever since.

“All Jacob has ever talked about to people is being able to use a phone,” Dadey said in an email interview. “Most teens can’t wait to get a driver’s license — Jacob knows that will probably never happen for him — so the next big moment for him in his life is to have his own smartphone.”

For Ben Dov, the prospect of helping change lives has been transformative.

“It’s been incredibly rewarding,” he said. “I have learned so much. … These devices are literally a window into the entire world. We called it Sesame because it indicates our desire to open up worlds for people.”

In fact, the phone turns on with two simple words: Open Sesame.