Op-Ed: Are voluntary dues enough to get people to join synagogues? 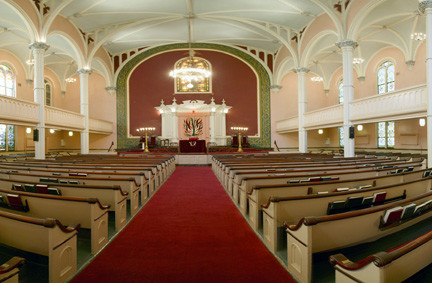 MINNEAPOLIS (JTA) — Michael Paulson reported in The New York Times on the “Pay What You Want” model that some synagogues are implementing to reduce the financial barrier to membership. Paulson estimated that about 30 synagogues across the United States are trying voluntary dues.

These changes, Paulson wrote Monday, have come from “an acknowledgement that many Jewish communal organizations are suffering the effects of growing secularization, declining affection for institutions, a dispersal of Jewish philanthropy and an end to the era in which membership in a congregation was seen as a social obligation.”

With those realities, a massive change in the dues structure is necessary, but is it sufficient? Changing the financial requirement for membership without addressing the widespread lack of interest in attending synagogue or engaging in a Jewish life is going to yield more of the same long term: low participation and apathy.

Full disclosure: My husband and I are members of three synagogues. We’re members of my husband’s childhood Conservative synagogue in St. Louis Park, Minn., where our kids went to preschool, and we’re active at a newly revived Orthodox synagogue. We also consistently go to Chabad (where voluntary dues has been in place for decades). I was raised Reform, and we are not Orthodox. Are we an anomaly? Perhaps. Do we have to be? No.

We stay at all three synagogues because of the relationships we have with the rabbis, their families and with the other congregants. We have also studied with Reform and Conservative rabbis, Aish Hatorah teachers and with our local kollel leaders. Like many modern Jews, we’re not tied to one denomination.

“I’m hyper-affiliated,” I say whenever someone wants to know where I stand. Though I prefer, “I’m Jewish.”

After reading Paulson’s article, I asked friends on Facebook what keeps them from wanting to be more Jewishly involved in and out of synagogues. I admit that I already suspected money had little to do with their hesitation. The discussion went on for 12 hours, yielding more than 100 comments from Jews across the country. One friend summed up the issue succinctly: “Many [Jewish leaders] are asking, ‘How can we get people more involved in our synagogue?’ as opposed to asking ‘How can we get people more involved with Jewish life?’” Only a small fraction of the answers focused on the expense. I received numerous versions of “Services are at bad times for little kids,” “It’s too cliquey,” “Everything is geared to young families” and “I feel out of place as a single person.” The grievances mostly focused on Shabbat services.

Adina Frydman, the executive director of  UJA-Federation of New York’s Synergy program, which recently published a study on congregations with voluntary dues, said, “Changes to the synagogue dues system are just part of a much bigger picture, namely the ways synagogues can continue to evolve to be places that create a deeper, more authentic sense of community.”

My experience with a wide variety of synagogues and Jewish organizations tells me that the pressing challenge now for non-Orthodox synagogues is creating communities where congregants care about Judaism and therefore see their synagogues as valuable. That is not to deny a real need for dollars, but the financial insecurity is a symptom of a Jewish population that does not see how the Judaism offered by the synagogue has anything to do with their lives. If the perception of the product or the way it’s delivered (low rabbi-to-congregant ratio) does not change, how will a lower cost or even a free membership make people want to spend time, their other highly protected currency, at synagogues or in any aspect of Jewish life?

Provide value and people will pay. Show members the joy of Judaism and empower them to bring that joy home. Engage members with discussions on how to be a better person, a better parent, sibling, spouse, friend, and a more ethical businessperson, and they will come back for more. If congregants do not see how Judaism can be relevant in their homes and everyday lives, then they will go somewhere else in search of meaning and take their dollars with them.

I’m not implying that synagogues have it all wrong. Organizations don’t die because they provide no value; they die because they fail to provide enough value to enough people. As Rabbi Avi Olitzky, co-author with his father, Rabbi Kerry Olitzky, of the forthcoming book “New Membership & Financial Alternatives for the American Synagogue” (Jewish Lights Publishing), told me, “There has to be harmony between the synagogue’s mission and its agenda. A synagogue cannot just be in the business of being in business.” When I told him that so many of us want community but don’t always know how to define it, he described community as a circle to which you feel you belong that will miss your presence.

The reality for synagogues is that members – and those not even considering joining – can find  community in any number of places from yoga studios to the racquetball court to their careers, or their kids’ schools and sports teams. If we can’t give people a reason to infuse that circle with Judaism (not just with Jews, but with Judaism), then sadly I don’t see a future for synagogues whether they cost money to belong or not.

(A different version of this article originally appeared on our partner site Kveller.)

(Nina Badzin is a freelance writer living in Minneapolis with her husband and four children. She blogs regularly at ninabadzin.com and tweets @NinaBadzin.)