Le’Or aims to put marijuana legalization on the Jewish agenda 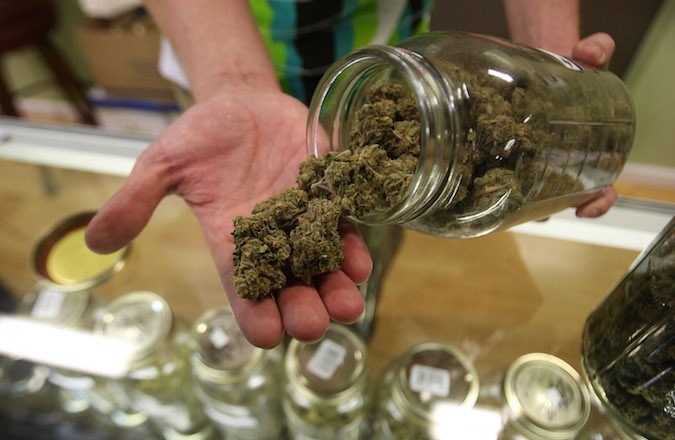 That was President Richard Nixon speaking to his top aide, H.R. “Bob” Haldeman, during a recorded White House meeting back in 1971.

Fast forward some four decades, a new nonprofit group based in Portland, Ore., is hoping to prove Nixon right. Le’Or, founded about a year ago with seed funding from Dr. Bronner’s Magic Soap Company, wants to convince American Jews that ending marijuana prohibition belongs on the progressive Jewish communal agenda alongside marriage equality and immigration reform.

“Our goal is to erode the stigma, so that the Jewish community at large can see that supporting marijuana legalization is not just the right thing to do, it’s the Jewish thing to do,” said Roy Kaufmann, who founded Le’Or with his wife, Claire. 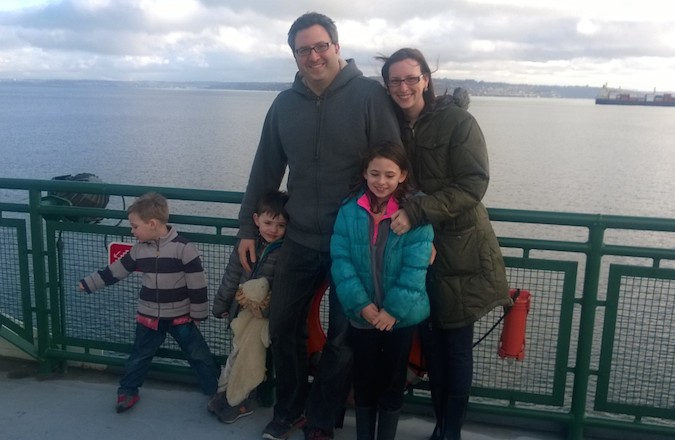 Roy and Claire Kaufmann, the founders of the nonprofit Le’Or, with their children. (Courtesy of the Kaufmann family)

The Oregon governor’s speechwriter by day, the Israeli-born Kaufmann, 36, is a staunch opponent of America’s decades-long War on Drugs. Launched by Nixon in the 1970s and expanded during the Reagan era, the ongoing drug war has resulted in an unprecedented number of U.S. citizens — and a disproportionate number of African-American males — being sent to prison for drug-related offenses.

Part of the answer, legalization advocates say, is to make marijuana a controlled substance on par with alcohol and cigarettes. In November, Oregon, Alaska and Washington, D.C., joined Colorado and Washington state in legalizing recreational cannabis use. The four states will tax and regulate sales of the plant, while D.C.’s law, which sanctioned possession only, has yet to take effect following a congressional move to block its implementation.

Meanwhile, medical marijuana is now legal in 23 U.S. states. While cannabis is still prohibited under federal law, as the tide shifts toward legalization, even Congress is softening its stance. Last December’s government spending bill included a bipartisan amendment that blocks the U.S. Justice Department from using funds to target patients or collectives in states with medical marijuana programs.

The seeds of Le’Or — “to illuminate” in Hebrew — were planted when the Kaufmanns began to lament the lack of Jewish communal involvement in pushing for marijuana legalization.

“There’s a disconnect between the civil rights issue and the number of Jewish people who, let’s be honest, enjoy the cannabis plant,” said Claire Kaufmann, now a marketing and branding consultant for the burgeoning cannabis industry. “It seems to me to be a contradiction.”

Specifically, it outraged the couple that while white Americans — themselves included — could casually smoke marijuana and get away with it, their black counterparts were far too often arrested and incarcerated for the same low-level crime.

A business school graduate and the mother of three young children, Kaufmann, 35, said she never imagined she’d wind up working in the marijuana industry. The Portland resident became involved, she said, because of her commitment to drug policy reform, not to reap the kind of profits that have given rise to a new crop of cannabis entrepreneurs in what has been dubbed the “green rush.”

“My real passion is the racial and economic injustices,” said Claire Kaufmann, who blogs about the industry at rebrandingcannabis.com. “I see marijuana legalization as the gateway issue to a much larger and more uncomfortable issue around prison sentencing reform.”

According to the Southern Poverty Law Center, black people use drugs at about the same rates as whites but are three to five times more likely to be arrested as a result.

In 2012, Roy Kaufmann led the first campaign to legalize marijuana in Oregon. He was struck by how few rabbis and Jewish communal leaders jumped on board. After the failed bid, he turned to Dr. Bronner’s to back his idea for a Jewish pro-cannabis group. 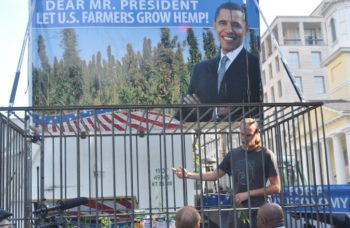 In 2012, David Bronner of Dr. Bronner’s Magic Soaps locked himself in a steel cage with a dozen industrial hemp plants in front of the White House. (Courtesy of Dr. Bronner’s)

Dr. Bronner’s has played a leading role in hemp and marijuana legalization efforts since 2001, when David Bronner, the company’s president and grandson of the spiritually minded German-Jewish soapmaker, launched a successful lawsuit against the Drug Enforcement Agency to allow hemp imports into the United States. The Vista, Calif.-based company uses non-psychoactive hemp oil imported from Canada in its all-natural line of soaps.

While Bronner, 41, was raised Protestant, he also grew up reciting the Jewish Shema prayer and said he feels a strong connection to his Jewish roots. His grandfather’s universalist “All-One” message — touted on famously wacky soap labels with references to Rabbi Hillel and Jesus — remains at the core of the company’s progressive philosophy.

“The major drug reform groups in the country are already led by Jews, and they’re doing it out of a deep-seated commitment to social justice,” Bronner said. “Furthermore, Israel has been a real pioneer in cannabis.”

One of the world’s only countries with a national medical marijuana program, Israel has long taken the lead on marijuana research. THC, the psychoactive compound in the cannabis plant, was first identified in 1964 by Israeli scientist Raphael Mechoulam, for example. And just this year, an Israeli research company announced that it had developed an oral patch so that medical marijuana users can ingest the drug without inhaling smoke. The patch was based on research conducted at Hebrew University in Jerusalem.

Bronner himself helped jump-start Israel’s $40-million-year medical marijuana industry more than a decade ago when he donated $50,000 to the country’s first dispensary, Tikkun Olam, which takes its name from the Jewish mystical tradition of repairing the world. In 2014, the Magic Soap Company donated more than $100,000 to both the Oregon and Alaska legalization initiatives, and some $250,000 to the D.C. campaign.

But Bronner’s activism has been more than monetary. In 2009, he planted hemp seeds in front of the Drug Enforcement Agency’s D.C. headquarters to protest the U.S. ban on hemp farming, and three years later he locked himself in a steel cage with a dozen industrial hemp plants — they contain only trace amounts of THC — in front of the White House. 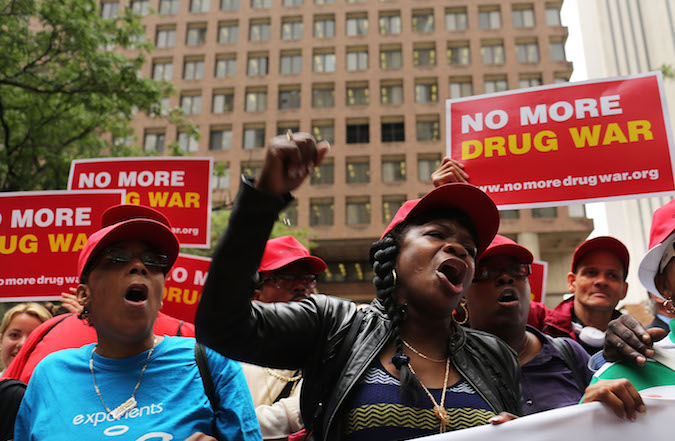 Last year, President Barack Obama signed into law a farm bill that included an amendment to allow industrial hemp farming for research purposes. The amendment was co-sponsored by Jared Polis, a Jewish Democratic congressman from Colorado who recently introduced a bipartisan bill to allow hemp production for commercial purposes as well.

As Bronner noted, the leaders of many of America’s major drug policy reform groups are also Jewish. Among the organizations they helm are the Multidisciplinary Association for Psychedelic Studies, a nonprofit that studies the therapeutic potential of psychedelics and marijuana and was founded by the Jewish Chicago native Rick Doblin. There’s also the Drug Policy Alliance, whose founder and executive director, Ethan Nadelmann, is the son of a prominent Reconstructionist rabbi and links policy work to “the broader Jewish tradition of fighting for social justice.”

Jewish advocacy groups, however, have largely hung back on issues of marijuana legalization and drug policy reform. Those contacted by JTA, including Bend the Arc: A Jewish Partnership for Justice and the American Jewish Committee, which lobbies Congress on behalf of issues such as immigration reform and marriage equality, declined to comment.

But according to Doug Kahn, executive director of the Jewish Community Relations Council of San Francisco, “the lack of engagement on this issue by the organized Jewish community is not because it’s a taboo issue, it’s because we have to set priorities. And this issue has not emerged as a priority.”

Ethan Felson, vice president and general counsel of the Jewish Council for Public Affairs — the umbrella body of local community relations councils — agreed with Kahn’s assessment, but added that as the marijuana legalization issue becomes more prevalent, the local councils will have to take a closer look.

“I’m not aware of a lot of communities that have delved deeply at this point,” Felson said. “But it’s likely that over the next few years that will change.”

Within the organized Jewish community, however, the Reform movement has been a marked exception. In 1999, Women of Reform Judaism passed a resolution in support of medical marijuana that four years later was adopted by the full Union for Reform Judaism. More recently, the Reform movement’s public affairs arm, the Religious Action Center, has lobbied Congress on behalf of legislation reforming prison sentencing.

“The core priority for us has been addressing the sentencing disparity between white Americans and black Americans who are convicted for drug-related offenses,” said Barbara Weinstein, the RAC’s associate director.

For some prominent Jews, however, it’s not merely about whether or not to prioritize other issues, but about actively working to block marijuana legalization.

In Florida, where a November bid to legalize medical marijuana lost by 3 percentage points, Jewish billionaire Sheldon Adelson pumped $5 million into the campaign to defeat its passage. The casino mogul’s Israeli-born wife, Miriam, is a drug addiction specialist who runs a rehabilitation center in Las Vegas and believes that marijuana is a “gateway drug” to harder, more dangerous substances — a belief that legalization advocates dispute, citing studies to the contrary.

But if Le’Or has its way, Florida could indeed legalize medical marijuana in the next election cycle – and California might well take the next step and allow recreational use.

“We’re talking about some of the biggest Jewish communities in the U.S.,” Roy Kaufmann said. “I look at 2016 and I think, ‘This is an opportunity to start building something now.’”