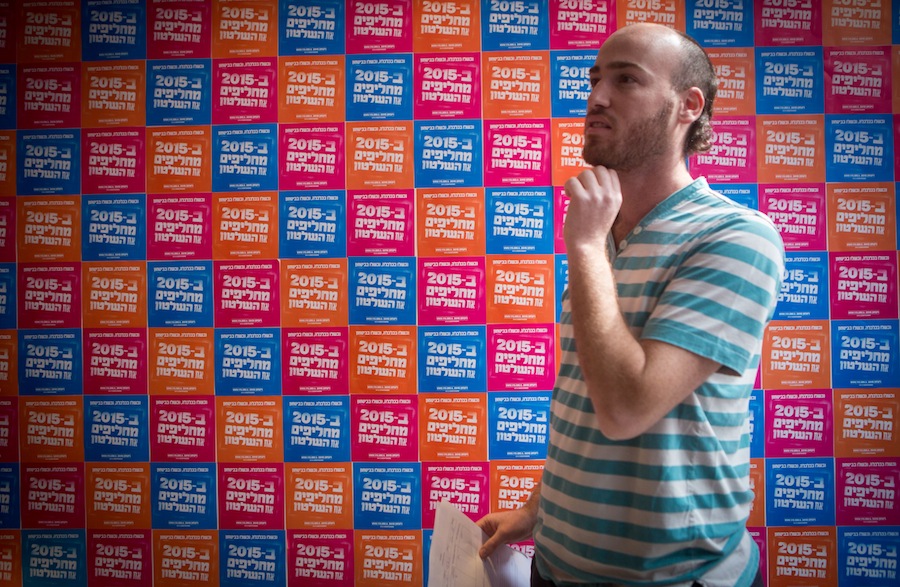 TEL AVIV (JTA) — When he goes door to door in this city handing out campaign materials, Shai Gal doesn’t tell people to vote for Labor, Meretz or the other liberal parties vying for support ahead of Israel’s March 17 election.

He just asks one question: Do you want to replace Bibi?

“Bibi has an interest for us to be scared about security,” Gal told a group of voters in Tel Aviv on Monday night, using the popular nickname for Prime Minister Benjamin Netanyahu. “He wants us to give up and not vote because that’s how it is. What upsets Bibi personally is that we’re creating a mindset of victory.”

Gal, 30, is a field organizer for V15, an organization established in December with one goal: to replace Israel’s right-wing government with a center-left coalition. Rather than trying to convince right-wing voters to move left, V15 has researched where most center-left voters live and launched an intensive ground operation to get them to the polls.

“To win the next election, we need to analyze the last election and figure out where to do fieldwork,” said V15 Executive Director Nimrod Dweck, 33. “Where should we act? Where does the center-left have a power base?”

Since its founding two months ago, V15 — the name stands for Victory 2015 — has recruited nearly 10,000 volunteers throughout Israel, with hundreds campaigning on the ground each week. Going door to door in the afternoons and meeting people in the street on weekends, the volunteers ask voters to sign a pledge to vote — and then to vote for a centrist or left-wing party.

V15 formed after a Facebook exchange in early December led its founders to set up a meeting of center-left voters in Tel Aviv. The group has since partnered with OneVoice, a nonprofit aiming to encourage grassroots support for a two-state solution. V15 has also hired 270 Strategies, an American political consulting group headed by Jeremy Bird, who worked on President Barack Obama’s two victorious presidential campaigns.

The involvement of Bird and OneVoice have led Netanyahu’s Likud Party to accuse V15 of using foreign funding to manipulate Israel’s election. That criticism was echoed by American lawmakers Ted Cruz and Lee Zeldin, both Republicans, who wrote to Secretary of State John Kerry in January warning that U.S. taxpayer dollars were being used to influence Israeli elections and asking for an investigation. OneVoice received grants from the State Department in 2014, prior to its affiliation with V15.

Earlier this month, Likud petitioned Israel’s Central Elections Committee to ban V15, claiming that it amounted to illegal campaigning for the Zionist Camp, a combined list of the liberal Labor and Hatnuah parties. The committee has yet to issue a response.

“We chose to submit the petition so as to prevent the hard blow to Israeli democracy through the cynical and blunt use of foreign funding from extreme left-wing groups, which wish to influence Israeli public opinion in blunt violation of the Party Funding Law,” said a Likud Facebook post on Feb. 2.

Dweck said that while the organization has received donations from abroad, V15’s activities are legal because the law only prohibits outside groups from campaigning for a specific party, which V15 doesn’t do. He said V15 has no connection to, and does not coordinate activities with, any political party.

On Monday evening, speaking to potential volunteers at V15’s field headquarters here, Gal said the “Democratic party of Israel” runs from the political center through the far left.

“A range of people want to replace Bibi for a lot of reasons,” said Sarit Larry, 43, head of V15’s Tel Aviv staff. “Because the health system is collapsing [or] they want to buy an apartment. Enough is enough. Bibi is doing my work for me.”

Dweck had hoped for polling to reveal left-wing strongholds in the country’s poor and peripheral regions. But V15’s statistical analysis shows that most center-left voters live along Israel’s largely secular and affluent Mediterranean coast, specifically in the Tel Aviv and Haifa metropolitan areas.

“It’s very frustrating for someone that believes in socialist values because the center-left identifies with the poor, and it turns out that the power base is middle class and up,” he said.

On Monday, Larry gathered some 30 potential volunteers at V15’s Tel Aviv headquarters for an information session. One wall of the room was emblazoned with graffiti reading “Victory 2015.” Another wall showed a map of Tel Aviv divided into precincts. Outside hung a poster with the words “On March 17, we’re just switching” covering Netanyahu’s face.

The meeting opened with attendees saying why they wanted a new government. Their answers reflected the broad tent that V15 is trying to pitch. Some wanted a renewed peace process. One woman hoped for “maybe, maybe, maybe an apartment.” Others had lost faith in Netanyahu as a leader.

“I want a change in the state in many ways generally,” said Avner Avidan, 37, who returned to Tel Aviv after six years in Australia. “I want the right-wing parties and the extreme right to leave the government. I want to see the most left-wing government possible come in.”