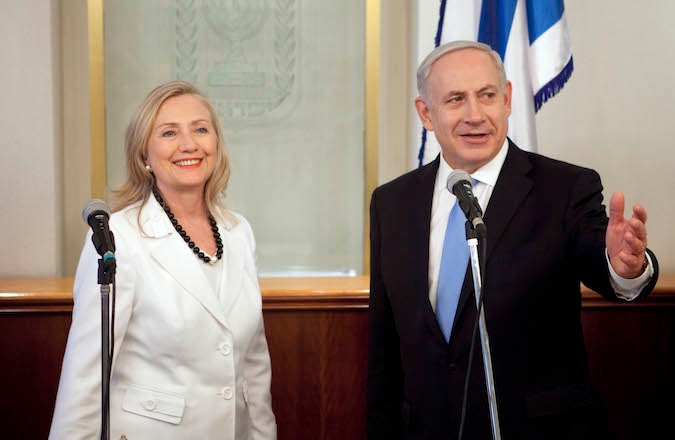 Some Democrats are worried that the tensions surrounding Prime Minister Benjamin Netanyahu's speech to Congress could affect Hillary Clinton in the 2016 presidential election. (Photo by Abir Sultan-Pool/Getty Images)
Advertisement

WASHINGTON (JTA) – The controversy over Israeli Prime Minister Benjamin Netanyahu’s planned speech to Congress next month is worrying pro-Israel Democrats about its possible impact on the 2016 elections. Even more worrisome, some Democrats say, are the voter trends underpinning the current tensions.

The invitation to Netanyahu made by John Boehner, the Republican House speaker, without consulting Democrats or the White House, and its fallout have exposed partisan fault lines on Israel. President Barack Obama says he will not meet with Netanyahu during the visit and some top Democrats are saying they will not attend the speech.

But shrinking attention spans mean bad feelings over the speech will be ancient history by 2016, despite GOP promises to keep it alive, said Ann Lewis, the senior adviser to Hillary Rodham Clinton’s 2008 presidential campaign on Jewish and women’s issues.

“I do not think this is a long-lasting one,” said Lewis, who is widely expected to advise the former secretary of state, U.S. senator from New York and first lady in a 2016 presidential run.

Of greater concern to Lewis, she said, is the increasing number of “don’t knows” in surveys of younger Democrats that include questions about support for Israel.

“As I’ve looked at those numbers, I see support among Republicans has gone up, support among Democrats has stayed the same, with a higher number in the ‘don’t know’ column,” she said. “That says to me we’ve got a lot more work to do.”

Obama cited the dangers of a partisan divide on Israel when he was asked Monday at a news conference about the speech.

“This isn’t a relationship founded on affinity between the Labor Party and the Democratic Party or the Likud and the Republican Party,” he said. “This is the U.S.-Israeli relationship that extends beyond parties and has to do with that unbreakable bond we feel and our commitment to Israel’s security. The way to preserve that is to make sure that it doesn’t get clouded with what could be perceived as partisan politics.”

For her part, Lewis said that she would be headlining a panel on reaching out to progressives at the American Israel Public Affairs Committee’s annual conference next month.

“The reason you look at polls is to figure out what to do next,” she said, and what’s next includes aggressive pro-Israel campaigning among young progressives.

The bad feelings are becoming somewhat of a partisan matter, with Democratic leaders in Congress saying the speech is a bad idea. Some top Democrats, including Vice President Joe Biden, Sen. Patrick Leahy (D-Vt.), the top Democrat on the Judiciary Committee, and Rep. James Clyburn (D-S.C.), the third-ranked Democrat in the House, as well as prominent members of the Congressional Black and Hispanic Caucuses, are vowing not attend.

At the same time, Republicans are gearing up to count heads at the speech and campaign against Democrats who don’t show.

“If these Democrats would rather put partisan politics ahead of principle and walk out on the prime minister of Israel, then we have an obligation to make that known,” Matt Brooks, who directs the Republican Jewish Coalition, told Politico last week.

Boehner invited Netanyahu to address Congress — a reprisal, in part, for Obama’s support for nuclear talks with Iran — without consulting the White House, a breach of protocol, or Democrats, a departure from tradition.

Tamara Coffman Wittes, director of the Center of Middle East Policy at the Brookings Institution, said support for Israel was increasingly contingent on worldviews that divided along party lines.

The evangelical community tends to take a more hawkish approach to Israel policy. Meanwhile, said Wittes, citing Brookings polls, “blacks and Hispanics, who are an increasingly important base for the Democratic Party, tend to look at the Israeli-Palestinian conflict more through a human rights lens and that tends to make them more interested in seeing the United States look for a compromise.”

But she noted that it would take “some time” for the trends to manifest into electoral politics.

“I would not draw a direct line between this Boehner speech issue and what’s going to happen in 2016 elections,” Wittes said.

Rep. Steve Cohen (D-Tenn.), a Jewish congressman from a Memphis district that is majority black, said the adversarial and partisan cast of the speech to Congress obscured its message and stoked feelings that the Israeli prime minister and majority leaders in Congress had disrespected Obama.

“You don’t go into someone’s home and question their choices,” he said. “My district is African-American and a lot of people see this as dismissive of the first African-American president.”

Mara Rudman, who had served as a senior national security official in the Clinton and Obama administrations, argued that support for Israel should be defined more broadly than support for Netanyahu’s specific agenda.

“This is a question of one individual’s bad judgment call,” said Rudman, who is now a consultant. “This day, this moment will pass.”

David Makovsky, who until late last year worked at the State Department on Israeli-Palestinian peace talks, said he is concerned that the fallout from Netanyahu’s speech could reverberate well into the future, in part because it could reinforce trends showing tapering support for Israel among Democrats.

“I’m worried that this is going to be a big episode,” said Makovsky, an analyst at the Washington Institute for Near East Policy who is on a speaking tour of campuses. “People are asking me about it; the story isn’t going to away.”

In Makovsky’s view, Netanyahu by agreeing to speak to Congress is undermining the urgency of his case against the emerging deal between Iran and the nuclear powers.

“If you think it’s an existential threat, you should do it in a context that is not politicizing it,” he said.

Meanwhile, Lewis refused comment on how any GOP attacks citing the speech might play in 2016. But another Democratic operative with ties in the Jewish community said Jewish voters would be able to handily distinguish Hillary Clinton from Obama.

“She has to find ways to distance herself from the Obama administration of which she was a huge part” because of Obama-Netanyahu tensions that pro-Israel groups blame on both leaders, said the operative, who spoke on condition of not being identified because Clinton has yet to declare her intention to seek the presidency.

Finding those avenues should not be difficult, the person said, because of Clinton’s pro-Israel record in the Senate and her association with her husband, President Bill Clinton, who is still held in high regard in the pro-Israel community.

“She’s not Obama, she’s not perceived in the community as Obama,” the operative said. “Republicans will try and paint her that way, but she’s exceptionally well liked in Israel and by American Jews.”