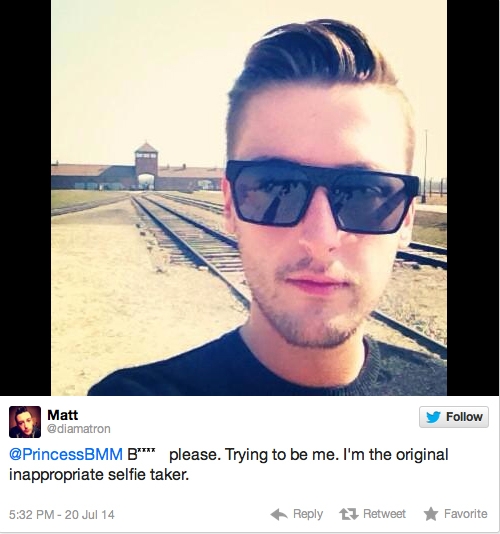 Twitter users like @diamatron, seen taking a selfie at a concentration camp in Poland, have provoked widespread criticism.

A few weeks ago, during a Holocaust commemoration ceremony at the former Czech concentration camp Terezin, a Czech politician was caught taking a selfie on live television.

Zdenek Skromach, 58, of the Czech Social Democratic Party, appeared to wear the slightest of smiles as he snapped the photo on his phone from within a crowd of very grim-looking people walking to the commemoration ceremony. Almost immediately, Twitter users were “disgusted” and found the selfie “sickening.”

This all might sound familiar. In June of last year, teenager Breanna Mitchell faced a barrage of thousands of hateful tweets for taking a wide-smiling selfie at Auschwitz. A Facebook page called With My Besties in Auschwitz, which features teens posing in various locations in the concentration camp, was taken down in June after just two days. The popular Tumblr blogs Selfies at Funerals and Selfies at Serious Places (which includes several photos of people at Auschwitz and Amsterdam’s Anne Frank house, among other places) ceased posting new photos by the end of 2013 in part because of the harsh social media criticism they received.

Even the Israel Defense Forces got into the Holocaust selfie game. Last year around Holocaust Remembrance Day, the IDF’s “Selfie with a survivor” campaign urged Israelis to take photos of themselves with Holocaust survivors and post them on Facebook.

And at former South African President Nelson Mandela’s funeral in 2013, President Obama got snared in the selfie etiquette storm when he was caught taking a rather jovial selfie with British Prime Minister David Cameron and Danish Prime Minister Helle Thorning Schmidt. (Michelle, sitting next to her husband, did not look very pleased.)

Are the people posing for these selfies unequivocally guilty of defiling sacred places? Or are they merely using these technologies in new and misunderstood ways?

“I did not take a selfie,” Skromach said to Czech media. “I took pictures to document the event as I usually do.”

“Everybody takes pictures,” he continued. “But I can see that it’s me who got the attention.”

Skromach says he was just documenting the event. As Caitlin Dewey explains in The Washington Post:

The selfie is already a politically and socially fraught form of expression, as many sociologists and social media theorists have written before; while self-portraits are understood by many to be little more than a flagrant show of narcissism or a plea for attention, they may mean something different to the taker herself. It’s less a matter of self-glorification than self-documentation — “I was here.” “This is who I was that day.” “This happened.”

Jason Feifer, the founder of the Selfies at Funerals blog, had this to say in the Guardian:

Many people interpreted funeral selfies as further evidence of millennials’ self-centeredness. I didn’t. Had my parents’ or grandparents’ generation grown up with the kind of social media tools that today’s teens have, they’d have done equally embarrassing things for all the world to see. This isn’t the nature of kids today; it’s just the nature of kids. And anyway, when a teen tweets out a funeral selfie, their friends don’t castigate them. They understand that their friend, in their own way, is expressing an emotion they may not have words for. It’s a visual language that older people – even those like me, in their 30s — simply don’t speak …

No funeral is 100% sadness. It’s a mixture of loss and celebration, of life in all its parts.