Why there is no Chabad house in Havana 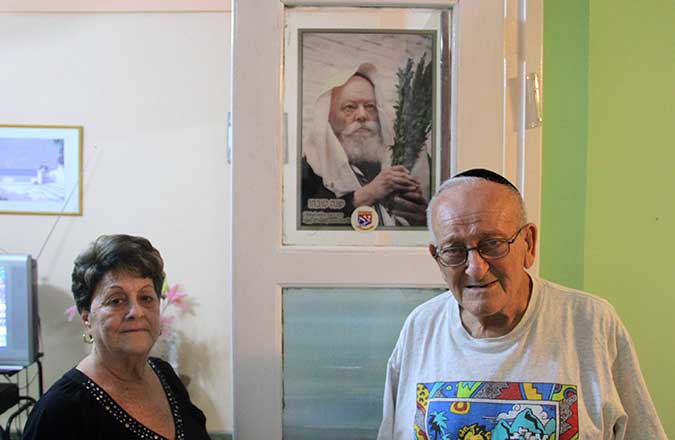 Miniatures of the same portrait sit atop a glass-covered countertop near an image of the Meshulams’ son, Moises, taken at the Chabad-Lubavitch yeshiva in Buenos Aires that he attended for a decade. Despite the iconography, and their kosher kitchen, the Meshulams are not strict adherents of the Hasidic movement.

But in Cuba, a country without a permanent Chabad outpost, the Meshulams — he’s a retired physician, she’s a homemaker — are proud supporters. Their home in this city’s tranquil Nuevo Vedado neighborhood has become a de facto headquarters for the handful of mostly Latin American Lubavitch emissaries who visit the island on major Jewish holidays.

The Meshulam family home is, according to Rebeca, the “beit Chabad for Cuba.”

There are reasons Chabad doesn’t have a house of its own, stemming from a years-long dispute with Cuba’s 1,500-member Jewish community. Indeed, over the past eight years, relations between Chabad, the haredi Orthodox outreach organization, and Cuban Jewish leadership have deteriorated to the point where Lubavitch emissaries will not step foot in the city’s Orthodox synagogue, Adath Israel. Meanwhile, Havana’s Conservative Beth Shalom, the largest synagogue in Cuba, decries Chabad’s ongoing presence here as illegal.

The roots of the hostilities lie in differing interpretations of halachah, or Jewish law, especially over the question of who should be considered Jewish. While exact figures are unknown, there is a high rate of intermarriage inside the Cuban Jewish community, according to Beth Shalom president Adela Dworin, who knows of only 20 or so Cubans — including herself — born to two Jewish parents.

But since 1992, when the country changed its constitution to allow for freedom of religion, hundreds of Cubans have been converted by visiting Conservative rabbis, Dworin said. Chabad, however, does not recognize non-Orthodox conversions.

Dworin accused emissaries of Chabad’s Cuba operation, Chabad Friends of Cuban Jewry, or CFCJ, of engaging in “discriminatory” practice, claiming they have barred Cubans they don’t consider halachically Jewish from their programs.

Shimon Aisenbach, the director of CFCJ, denied the claim, calling it “a sick lie.”

In recent years, Chabad has also drawn the ire of some in the Jewish community here for skirting a Cuban law that requires all visitors on religious missions to carry religious visas. Each year, dozens of American and Canadian Jewish missions — sponsored by synagogues and Jewish organizations such as B’nai B’rith — arrive in Cuba lugging bags of clothing and medical supplies. 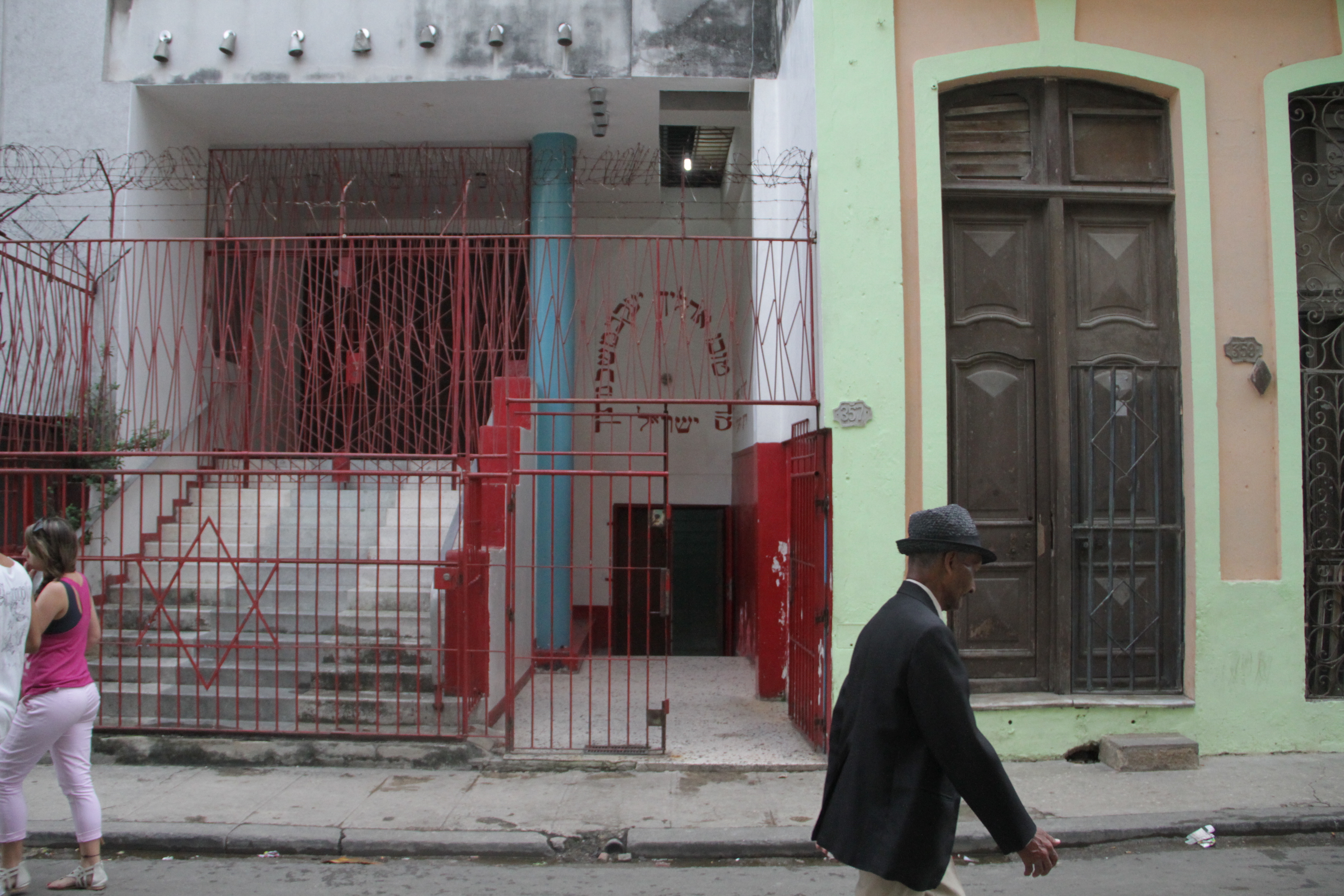 The Lubavitch emissaries who enter Cuba from across Latin America and Canada come instead with tourist visas.

Máriem Martinez Laurel, the press secretary and cultural attaché at Cuba’s embassy in Ottawa, acknowledged that religious travelers sometimes sneak into Cuba on tourist visas by deceiving their local consulate.

“If they are going to do religious work, this is not correct,” said Martinez Laurel, who had not previously been aware of Chabad’s work on the island. “They cannot do any religious work with a tourist card.”

Aisenbach, who runs CFCJ out of a basement office at his home in a suburb north of Toronto, said his group submitted religious visa applications in the past but they were never processed in a timely fashion. When asked why CFJC no longer applies for religious visas for its emissaries — or attempts to establish a permanent residence on the island — Aisenbach said he believes that Cuba’s Office of Religious Affairs would rule against Chabad, given Dworin’s close ties to the government.

CFCJ has worked in Cuba since 1991, the same year that many international Jewish organizations, including the American Joint Distribution Committee, rushed in to provide aid following the collapse of the Soviet Union, Cuba’s chief benefactor at the time.

According to Aisenbach, that first year Chabad shipped nearly 2,000 pounds of clothing and medicine, shoes and Spanish-language prayer books to Jews across the island. In 1998, Chabad reported that it had imported seven tons of kosher food over the previous five years.

In those early years, Chabad was tolerated, even embraced.

At Adath Israel, a two-story building behind a barbed-wire gate in Old Havana, pictures of Lubavitch emissaries posing with synagogue members adorn the foyer walls and many of the synagogue’s prayer books come from a Lubavitch publisher. Aisenbach said he had strong ties with Adath Israel’s former president, Alberto Silverstein, who welcomed his emissaries into the congregation.

But by 2007 Silverstein had stepped down and a conflict had arisen with the synagogue’s new leaders. Aisenbach said members of Adath Israel told him flatly they didn’t care if their religious leaders were not halachically Jewish. (The current president, Jacob Berezniak-Hernandez, declined an interview with JTA.)

During the High Holidays that year, the congregation insisted that a man whose mother was not Jewish blow the shofar, sources said. For Aisenbach, such disregard for the precept of Orthodox Judaism, which holds that Judaism is passed down through the mother, was unbearable. 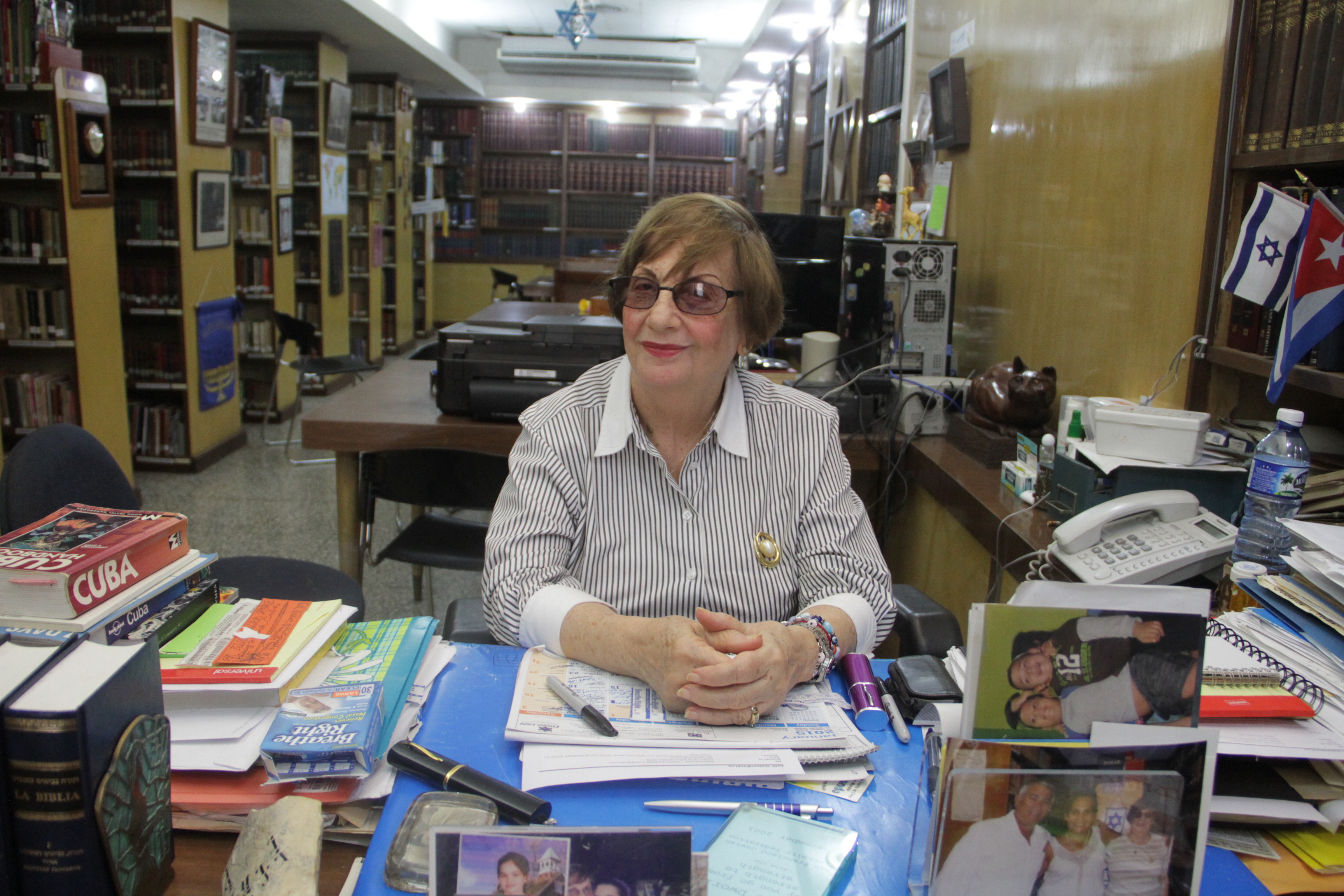 Adela Dworin has been president of the Beth Shalom synagogue since 2006 and serves as the Cuban Jewish community’s government liaison. She opposes Chabad’s traveling to Cuba on tourist visas rather than religious ones. (Josh Tapper)

“How do you reconcile calling yourself an Orthodox shul?” Aisenbach said. “There is no reconciliation because you can’t play with the Torah.”

A fissure developed along similar lines between Chabad and Beth Shalom in advance of a CFCJ-run Purim party three years ago at a rented location in Havana. According to Dworin, Lubavitch emissaries put out the word that the event was not open to dozens of children who had received Conservative conversions. Aisenbach denies that anyone was discouraged from attending.

Shortly before the party was to begin, Aisenbach said, government officials arrived at the venue to shut it down.

Following that incident, Aisenbach said he called Ted Sokolsky, then-president and CEO of UJA Federation of Greater Toronto, which arranges to send kosher-for-Passover food each year and organizes the paperwork for young Cuban Jews to participate in Birthright Israel programs, begging him to upbraid Dworin on CFCJ’s behalf.

Aisenbach said Sokolsky then threatened Dworin with a rollback in aid if she did not tolerate Chabad activities in Cuba — a claim that Sokolsky emphatically denies.

“I just encouraged all groups to set aside their differences and demonstrate good will towards each other,” Sokolsky, now a special adviser with UJA, said in an email. “No one needed that kind of infighting.”

While Dworin said she respects Chabad, “because they are very, very religious,” there seems little hope of reconciliation between the Hasidim and the Cuban Jewish establishment. Their practice of entering as tourists, she said, reflects poorly on Cuban Jewry, which maintains a cozy relationship with the government, twice hosting President Raul Castro for Hanukkah celebrations at Beth Shalom.

“It’s not nice,” Dworin said. “They can harm the Jewish community.”

Sitting in her living room rocking chair, Rebeca Meshulam leaned forward and brushed aside concerns about the consequences of associating with a religious group that enters the country without government authorization.

Meshulam and her husband, who are both in their 70s, are happy to provide their home as a base, at whatever cost.

“Nobody can tell me what to do,” she said, her husband nodding along. “We are Jewish, and we make religion how we think we have to do it.”