For Netanyahu, urgency trumps niceties when it comes to Iran, anti-Jewish attacks 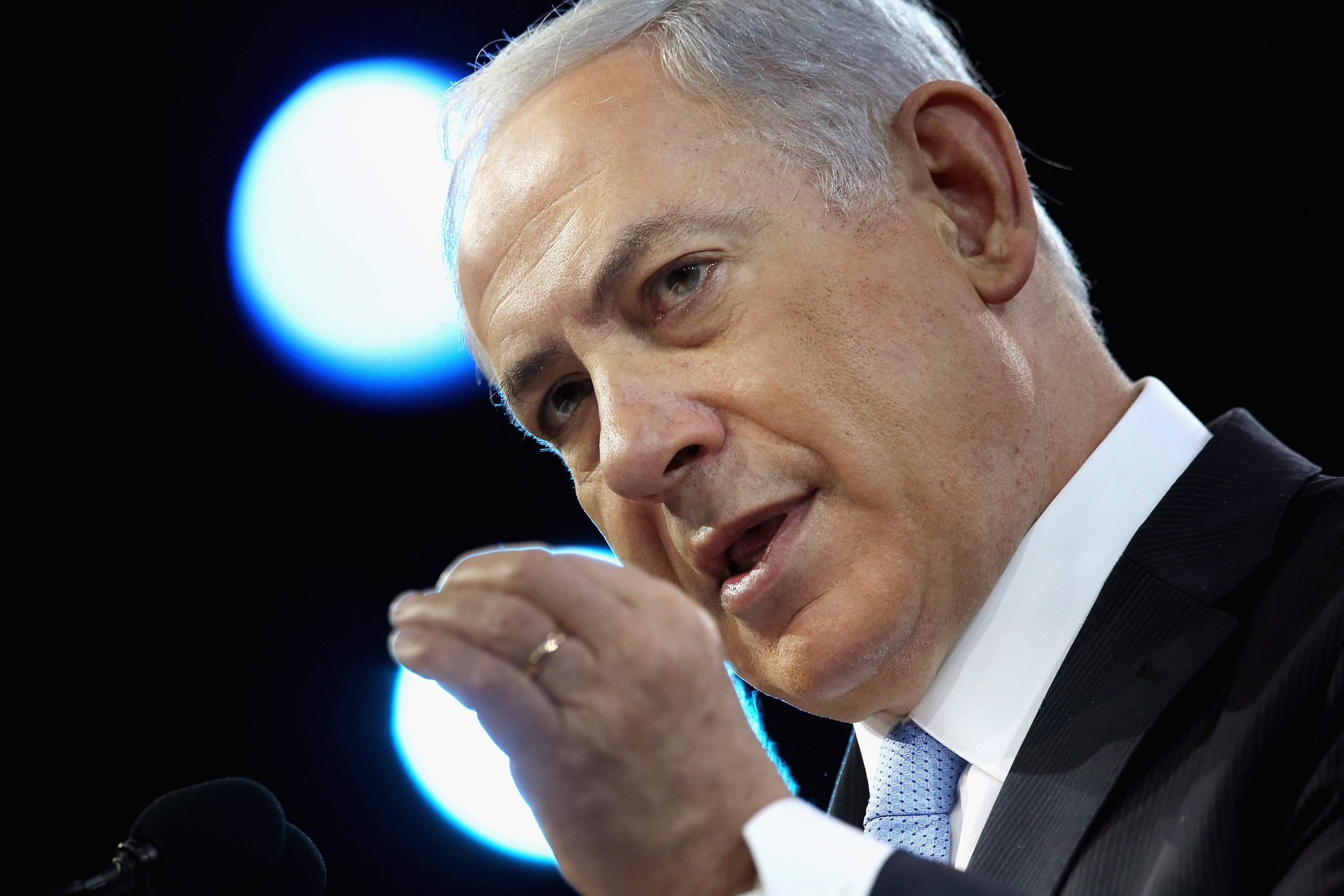 WASHINGTON (JTA) – Prime Minister Benjamin Netanyahu may be running for office in Israel, but this week he had plenty of strong messages for Jews in the United States and Europe.

Speaking Monday in Jerusalem to leaders of the Conference of Presidents of Major American Jewish Organizations, Netanyahu said he would press ahead with plans to speak March 3 to the U.S. Congress even though the speech has roiled the U.S. capital.

“I think the real question that should be asked is how could any responsible Israeli prime minister refuse to speak to Congress on a matter so important to Israel’s survival?” Netanyahu said. “How could anyone refuse an invitation to speak on a matter that could affect our very existence when such an invitation is offered?”

Netanyahu also sparked controversy with his comments after the weekend attacks in Copenhagen that killed two people, including a synagogue security guard.

“To the Jews of Europe and to the Jews of the world,” Netanyahu said, “I say that Israel is waiting for you with open arms.”

In both cases, Netanyahu stuck with highly charged messages along with his repeated insistence that his top responsibility — even more than pleasing allies — is to speak out when Israeli security and Jewish safety are at stake.

Rep. John Boehner (R-Ohio), the speaker of the U.S. House of Representatives, added fuel to the controversy over Netanyahu’s speech when he told Fox News over the weekend that he purposely kept President Barack Obama out of the loop regarding the invitation to the Israeli prime minister.

“It is no secret here in Washington about the animosity this White House has for Prime Minister Netanyahu,” Boehner said. “I simply didn’t want them getting in the way and quashing what I thought was a real opportunity.”

Boehner issued Netanyahu the invitation without consulting with the White House, notifying it just an hour or so before he issued the announcement on Jan. 21. Boehner also did not notify Democrats, and much of the pro-Israel community was kept out of the loop, too.

Top Obama administration officials have said they will not meet with Netanyahu in part because he is speaking just two weeks before Israel’s election and appearing with him would be inappropriate.

Netanyahu said that the looming March 24 deadline for an outline of an agreement between Iran and the major world powers trumped any other timing issue. That date is what “drives the speech,” he told U.S. Jewish leaders.

“Now is the time for Israel to make its case – now before it’s too late,” Netanyahu said. “Would it be better to complain about a deal that threatens the security of Israel after it’s signed?”

U.S. officials including Obama have said that any likely deal will leave Iran with the capacity to enrich uranium, albeit at a civilian scale. Netanyahu insists that even at minimum levels, an ability to enrich leaves Iran with breakout capacity.

Details of what minimum enrichment would look like have been leaked to the Israeli media, and the Washington Post reported Monday that this has led infuriated U.S. negotiators to limit what they convey to the Israelis after each session with the Iranians.

Netanyahu’s response, again, has been to intimate that the urgency of keeping Iran from going nuclear outweighs the niceties of keeping secret briefings from what both sides have agreed is an extraordinarily close defense and intelligence relationship.

“Just as Iran knows what kind of agreement is being offered, it’s only natural that Israel should know the details of the deal being formulated,” he told Haaretz as he headed into the meeting with the Presidents Conference. “But if there are those who think this is a good agreement, why must it be hidden?”

Officials on both sides have taken pains to assert that the strength of the relationship persists.

After news of U.S. plans to withhold information first made headlines in Israel, Intelligence Minister Yuval Steinitz issued a statement noting that he recently met with the top two U.S. officials consulting on the Iran talks — Wendy Sherman, the under secretary of state leading the U.S. side in the talks, and Phillip Gordon of the National Security Council.

The sides had differences, Steinitz said in his statement, but the meeting Monday with Gordon was in “a good and friendly atmosphere” and another one with Sherman a week earlier included a lengthy one-on-one session – code meant to convey that the United States was still sharing sensitive information.

Dan Shapiro, the U.S. ambassador to Israel, also was at pains to say that the defense and intelligence-sharing relationship persisted at full strength.

“Whether it be in the intelligence sphere, where we have reached new heights of intelligence sharing and cooperation, or with respect to joint training and readiness, our two defense establishments and our two fighting forces have never been closer,” Shapiro said at the annual conference of Israel’s Institute for National Security Studies.

He acknowledged, however, that there were “hot-button issues defining this election season,” but deferred to others at the conference to address them.

After his 2012 reelection, Obama said he would be tougher on Israel, one of his top advisers, David Axelrod, wrote in a book published this month titled “Believer: My Forty Years In Politics.”

Axelrod, who is Jewish, said Obama was a strong supporter of Israel, but he “felt he had pulled his punches with Netanyahu to avoid antagonizing elements of the American Jewish community.” CNN reported on the Israel sections of the book.

At the same time that the debate over Netanyahu’s speech to Congress raged on, the Israeli prime minister also found himself on the receiving end of criticism regarding his call for European Jews to consider making aliyah following the attacks in Copenhagen.

“Of course, Jews deserve protection in every country, but we say to Jews, to our brothers and sisters: Israel is your home,” Netanyahu said. “We are preparing and calling for the absorption of mass immigration from Europe. I would like to tell all European Jews and all Jews wherever they are, Israel is the home of every Jew.”

Netanyahu made the statement on Sunday morning before Israel’s Cabinet approved a $46 million plan to encourage immigration and adapt the absorption process to Jews from France, Belgium and Ukraine.

In response, Denmark Chief Rabbi Jair Melchior said, “Terror is not a reason to move to Israel.”

Israel’s former president, Shimon Peres, sounded a similar note, telling more than 1,000 attendees at the Times of Israel gala in New York on Sunday that Jews should come to Israel “because you want to live in Israel.”

Danish Prime Minister Helle Thorning-Schmidt visited the synagogue late Sunday morning, laying a bouquet of flowers at its gate and vowing that Denmark “will do everything” it can to protect its Jewish community.

“Jews are a very important part of Danish society,” she said earlier at a news conference. “I say to the Jewish community, you are not alone.”

Netanyahu has pushed forward with such calls for aliyah, even as he works to cultivate close ties with European leaders in his bid to head off what he sees as a bad Iran deal, and also to limit the influence of those in Europe calling for boycotts of Israel because of its policies regarding the Palestinians.

One of Israel’s main allies in both spheres is France, perhaps the most hawkish of the six major powers negotiating with Iran. Still, Netanyahu has irked the French with the immigration plan passed Sunday, budgeting for an expected surge in aliyah from France in the wake of terrorist attacks in Paris last month. The attacks included the siege of a kosher supermarket in which a terrorist killed four Jews.

French Prime Minister Manuel Valls rejected Netanyahu’s call for European immigration to Israel, saying, “My message to French Jews is the following: France is wounded with you and France does not want you to leave.”