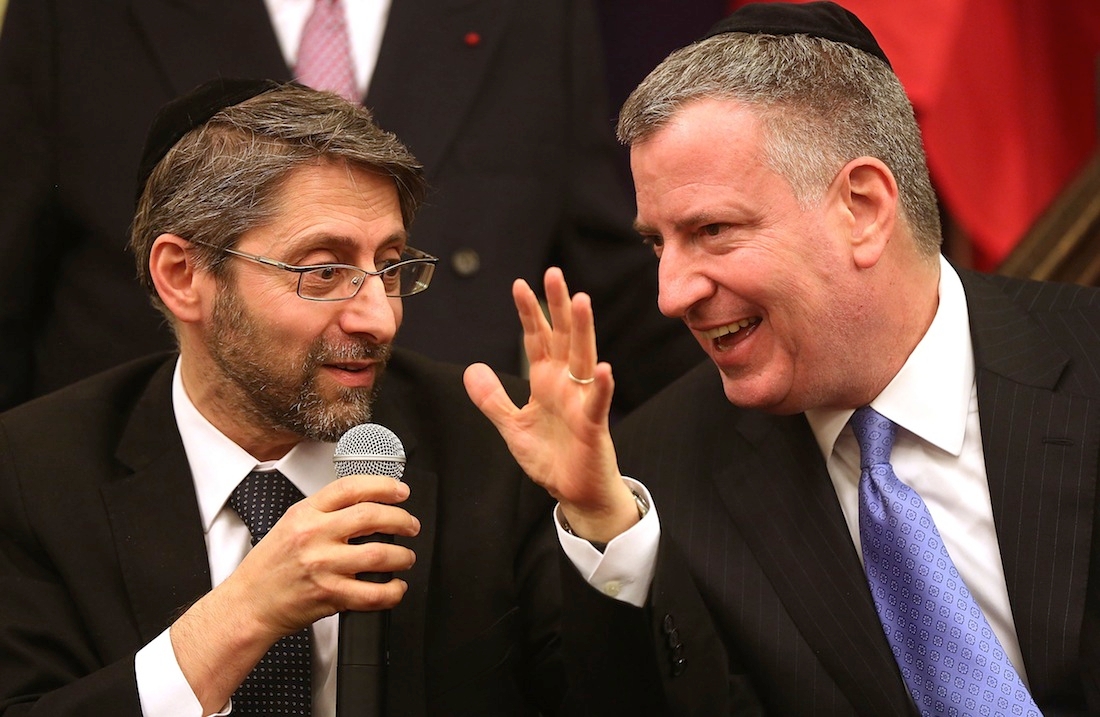 At a news conference Thursday in New York following a speech at Manhattan’s Park East Synagogue, Korsia said there had been a Jewish presence in France for 2,000 years and, echoing recent comments by French Prime Minister Manuel Valls, said that “France will no longer be France” if there were a mass Jewish exodus.

“His job is to say that,” Korsia said of Netanyahu. “It’s his nation. But our intention is to give a real choice to French and Jewish people. For a real choice, there has to be security and serenity in France.”

Korsia praised the French government’s efforts on behalf of the Jewish community, noting the deployment of 10,500 soldiers to guard Jewish schools and synagogues.

“We felt very alone for a long time,” he said. “Now we feel together.”

Some 200 people including New York Mayor Bill de Blasio attended the chief rabbi’s address at Park East synagogue. Korsia said that France’s massive unity rally, which drew millions into the streets in the wake of two terrorist attacks in January, might not have happened had the attack on a Jewish supermarket not been preceded by the attack on the Charlie Hebdo magazine offices.

“I’m not sure if there wasn’t an attack on Charlie Hebdo that they would have marched,” said Korsia, referring to the satirical newspaper where 12 people were gunned down on Jan. 7.

The chief rabbi also stressed the need for harsh punishment of anti-Semitic acts in the wake of the January attacks and other anti-Semitic incidents across Europe in recent weeks. In Copenhagen last week, one man was killed when a gunman targeted the synagogue he was guarding.

In response to the discovery last week of 250 destroyed graves in a French Jewish cemetery, Korsia emphasized that anti-Semitic crimes on any scale should be scrutinized.

“How many graves would we tolerate?” he said. “Ten? Twenty? We cannot accept any amount of crime.”

Korsia, 51, who speaks English softly and deliberately and with a thick French accent, also reserved special praise for de Blasio, who visited Paris in a show of solidarity less than two weeks after the attacks on Charlie Hebdo and the Hyper Cacher market.

“As a society, it was very moving,” Korsia said. “Your message was heard by all the Jewish communities of Europe.”

“The reason I went to Paris was because we as Americans have some responsibility here to say to our European brothers and sisters,” he said, “that indifference only leads us down a very dangerous path. No one Jewish living in Europe should have to beg for protection.”

A chorus of children from the synagogue’s elementary school sang the national anthems of France, Israel and the United States before the speeches.

Korsia, who became France’s chief rabbi in 2014, is seen as a relative progressive who wants to modernize France’s Orthodox community, especially in regard to women’s rights. Last July, he appointed a woman to a new high-level position — a bold move in a country where until 2006 women could not serve in the Consistoire, the body that governs Jewish religious life in France.

The country’s two previous chief rabbis were embroiled in scandals. Rabbi Gilles Bernheim admitted to several instance of plagiarism and Rabbi Michel Gugenheim was caught extorting over $100,000 from a woman in exchange for a Jewish divorce decree, or get.