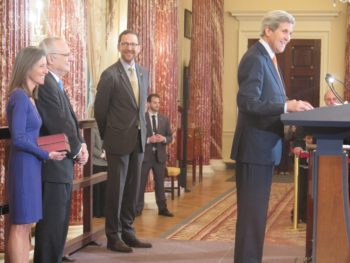 Rabbi David Saperstein (2nd from left) with his wife (left) watches as Secretary of State John Kerry introduces him at Saperstein’s swearing-in as the U.S. envoy on religious freedom on Friday Feb. 20 at the State Department (courtesy Ellen Weiss)

Rabbi David Saperstein is no stranger to teaching, having led the Reform movement’s Religious Action Center for forty years.

The closing to his speech at his swearing-in Friday got him enthusiastic applause — to his surprise, as you can see on the video.

He invokes a memory his father passed down to him of visiting the ruined synagogue in Danzig in 1939 and of seeing two signs outlining two vastly different visions.

In the summer of 1939, my father traveled throughout Poland and Palestine. He was one of the last to see the glory of European Jewry in full bloom. He visited Danzig, now Gdansk, just days after the Nazis had taken over. He went with enthusiasm to see the magnificent historic main synagogue of this vibrant Jewish community. To his utter dismay, it lay shattered in ruins. Only the portal over what had been the beautiful entrance front doors still stood. On the lawn, there was a sign that had been erected by the Nazis during the campaign which read “Komm lieber Mai und mache von Juden uns jetzt frei – come dear month of May and free us from the Jews.” With a chilling sense of the impending disaster symbolized by this scene, he gazed upward and saw the words – the ancient vision of Malachi, still inscribed over that remaining doorway: “Halo Av echad l’chulanu; halo eyl echad b’ra’anu – have we not all one Father? Has not one God created us? Two visions: one of hatred and tyranny, the other of brotherhood and sisterhood, of unity and peace; one of oppression, the other of freedom; one of darkness and despair, the other of light and hope.” This is a choice we face today.

To the religiously oppressed in every land who live in fear, afraid to speak of their beliefs; who worship in underground churches, mosques, or temples, lest authorities discover and punish their devotion to an authority higher than the state; who languish in prisons, simply because they love God in their own way; who question the existence of God; who feel so desperate that they flee their homes to avoid persecution, indeed, as we have seen so often to avoid simply being killed because of their faith – to all of them, together, you and I here, the State Department, this Administration, the Congress, together our nation can be, must be, will be a beacon of light and hope.