Israeli rescue workers tend to victims' bodies from the scene of a Palestinian suicide bombing on a passenger bus in Jerusalem June 18, 2002. (Yossi Zamir/Flash 90)
Advertisement 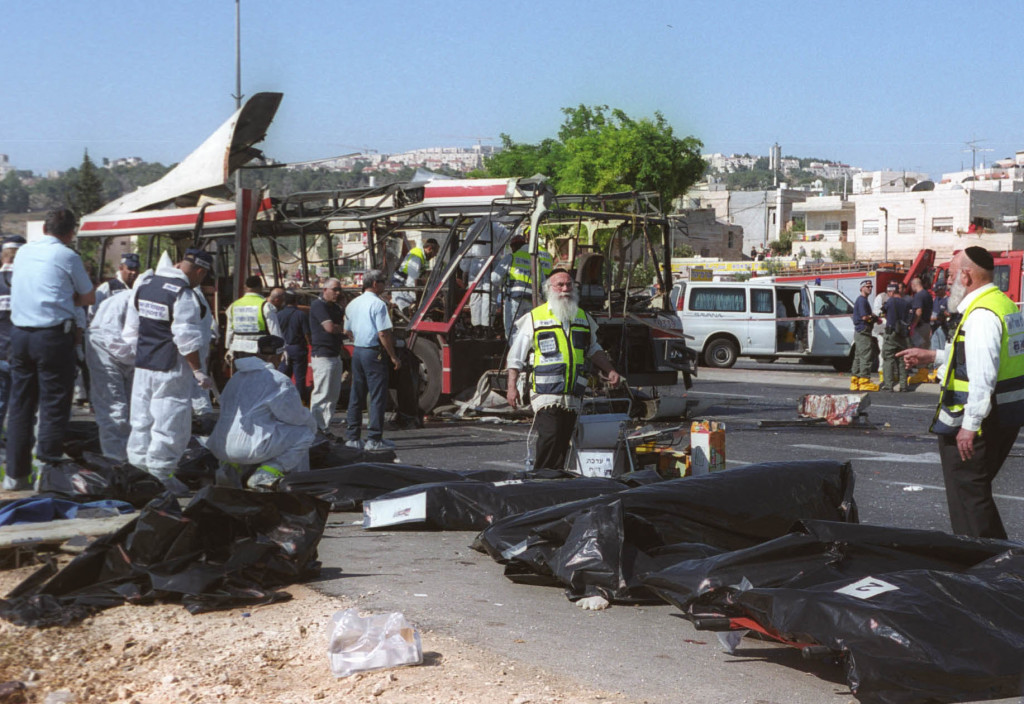 Israeli rescue workers tending to victims’ bodies at the scene of a Palestinian suicide bombing on a passenger bus in Jerusalem, June 18, 2002. (Yossi Zamir/Flash 90)

NEW YORK (JTA) — Round 2 in the judicial wars between Israel and the PLO went to Israel, and Israel isn’t about to let the Palestinians forget it.

A New York jury on Monday ordered the Palestine Liberation Organization and the Palestinian Authority to pay more than $218 million in damages to American victims of six terrorist attacks in Israel. That’s likely to be tripled to $655 million, as prescribed under the U.S. Anti-Terrorism Act.

The verdict followed a six-week civil trial in Manhattan federal court that included testimony from survivors of suicide bombings in Jerusalem. Israel was not a party to the lawsuit, which was brought by 10 American families suing over Jerusalem-area attacks that took place from 2002 to 2004.

But Israeli Prime Minister Benjamin Netanyahu made it clear in his statement after the jury award that he sees the decision as a new phase in the legal maneuvering launched by the Palestinian Authority at the end of last year when it allowed the International Criminal Court jurisdiction to assess whether Israel has committed war crimes.

“Instead of drawing the requisite lesson, the Palestinian Authority is advancing steps that endanger regional stability, such as the hypocritical application to the International Criminal Court even as it is allied with the Hamas terrorist organization,” Netanyahu said. “We expect the responsible elements in the international community to continue to punish those who support terrorism just as the U.S. federal court has done and to back the countries that are fighting terrorism.”

The attacks have been attributed to the Al-Aqsa Martyrs Brigade and Hamas.

“This historic verdict against the defendants will not bring back these families’ loved ones nor heal the physical and psychological wounds inflicted upon them, but it truly is an important measure of justice and closure for them after their long years of tragic suffering and pain,” said Nitsana Darshan-Leitner, a lawyer for the plaintiffs, in a statement following the verdict.

The PLO and the Palestinian Authority pledged to appeal, and they accused Israel’s supporters of manipulating the judicial system to political ends — the same way Netanyahu and others have characterized Palestinian moves at the ICC.

Mahmoud Khalifa, the Palestinian Authority’s deputy information minister, told the Financial Times that the verdict was “just the latest attempt by hard-line anti-peace factions in Israel to use and abuse the U.S. legal system to advance their narrow political and ideological agenda.”

In an interview before the decision, Darshan-Leitner said the focus, should her clients win, would be on garnering payment in the United States and Israel. She noted that the PLO settled in earlier instances once plaintiffs put liens on its assets.

“We put liens on their assets and started enforcing the judgments against bank accounts and other portfolios they had in the U.S., tax money Israel collected on behalf of the P.A.,” she said. “The main goal is to compensate the terror victims, to make the Palestinian Authority pay for what they did and get money to the people whose lives they devastated.”

While the plaintiffs argued that PLO Chairman Yasser Arafat had arranged for attackers and their survivors to be compensated, lawyers for the PLO and Palestinian Authority said the groups had condemned terror attacks and that any payments made to terrorists were done by low-level employees acting independently.

“Money is oxygen for terrorism,” Kent Yalowitz, a lawyer for the families, said in a closing argument, according to The New York Times. Yalowitz added that the U.S. anti-terrorism law “hits those who send terrorists where it hurts them most: in the wallet.”

The U.S. Anti-Terrorism Act was also used last September by a Brooklyn jury that found the Arab Bank liable for supporting Hamas terrorism. Damages in that case will be decided at a second trial.