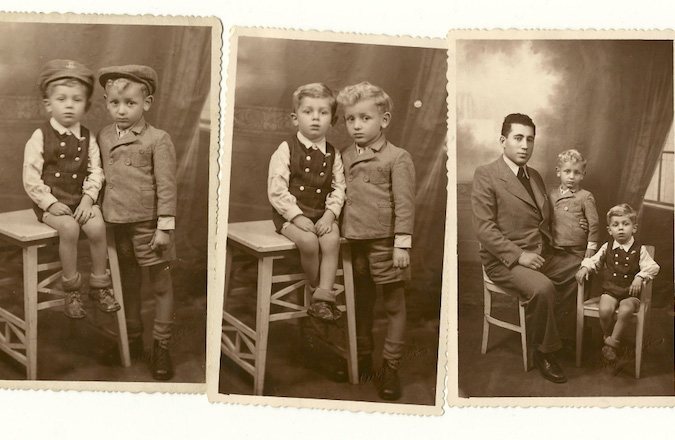 At right, Ben Zion Kalb with the Weinberg brothers, Alter and Yitzhak -- among the many Polish Jews he rescued. (Courtesy of Dr. Mark Colb)
Advertisement

BALTIMORE (JTA) – After his mother died in 2009, Dr. Mark Colb discovered in her bedroom dresser some familiar documents and photographs. He remembered most of the stories accompanying them, too.

All related to his late father’s efforts to rescue Polish Jews during the Holocaust via a land route and a smuggling operation that he had first conceived to save his fiancee and later wife – Mark’s mother, Clara Lieber.

A list of names that Colb found in their Manhattan apartment indicated that his father – then known as Ben Zion Kalb, but often utilizing the code name Ben Avraham – had saved about 150 fellow Polish Jews, mostly infants, youngsters and teenagers.

Colb believes, though, that the true number is several multiples of 150; his mother left behind in Europe many pages from the list. Judith Cohen, director of the U.S. Holocaust Memorial Museum’s photographic reference collection, estimated the number at “upwards of 1,000 people” he saved. (See the list below.)

The information has prompted Colb, a physician living in Boston, to seek acknowledgement of the heroism of his father, who died in 1973 at age 63.

“I do think he should be recognized as a great Jewish rescuer,” said Colb, 64. “What I want is for him to have a place of [honor] and for the knowledge of what he did to be part of what people know about the Holocaust.”

The heroism of non-Jewish rescuers has been well documented, with Israel’s main Holocaust commemoration museum, Yad Vashem, having awarded more than 25,000 people the designation of Righteous Among the Nations. But the roles of Jewish rescuers aren’t sufficiently known or appreciated, Colb said.

The Holocaust museum in Washington is working on both digital and physical exhibitions paying tribute to the efforts of Ben Zion Colb and other Jewish rescuers. 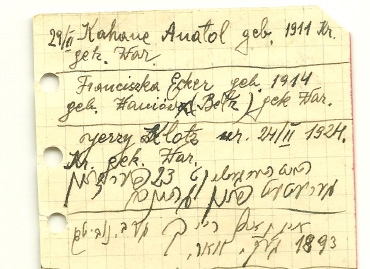 A portion of the list of names assembled by Ben Zion Kalb that his son,  Mark Colb, found in the Manhattan apartment of his parents. (Courtesy of Mark Colb)

The discussions with museum officials that Colb began three years ago led to his donation last year of the evidence of his father’s rescue efforts.

In seeking additional information, Colb and Cohen came across a 2012 “Seeking Kin” column about Peter Nurnberger, a resident of Bratislava, Slovakia, who was adopted during the Holocaust and raised by a couple in Kezmarok, in then-Czechoslovakia.

Nurnberger discovered in the early 1990s that he’d been born into a Jewish family in Bochnia, Poland, and was given over as a baby to someone who smuggled him to safety in Kezmarok.

“It fits everything we knew about the rescue operation,” she said.

Colb said he wouldn’t be surprised if Nurnberger – his original name was Moshe Hirschberg – was among the infants his father saved. The name does not appear on the list Colb gave the museum.

The article hit close to home in another way. Lieber had escaped from the Bochnia ghetto and was escorted by one of Colb’s non-Jewish associates, Jan Malec, through southern Poland and over the Tetra Mountains to Kezmarok, where the betrothed couple reunited after four years.

They would be married in July 1943 in Bratislava by Rabbi Chaim Michael Dov Weissmandl, who worked closely with Colb to rescue Polish Jews.

Weissmandl was adamant that upon reaching the relative safety of Slovakia, the children be placed in Jewish homes – a directive Mark Colb said his religiously observant father ignored, believing that their survival was better assured in non-Jewish households.

Weissmandl was a pivotal figure at another key moment: the debriefing in 1944 of Rudolph Vrba and Alfred Wetzler, Slovakian Jews who escaped from Auschwitz and provided detailed information on the Nazis’ killing machine. Their report, which came to be known as the Auschwitz Protocols, would be translated to German and smuggled to the West.

A handwritten version in Slovak of the report was among the materials Colb found and donated to the museum.

“As far as we know, this is the most original version that’s been located,” Cohen said.

Cohen said she surmised that the elder Colb obtained it while serving as an interpreter during a mid-June 1944 meeting with Monsignor Mario Martilotti, a member of the Vatican’s nunciature, or diplomatic office. The meeting, in a bid to awaken the consciousness of the world to the extermination, was held at the Piaristic monastery in Svaty Jur, near Bratislava. Attendees included Vrba and Oscar Krasnansky, an official of Bratislava’s Jewish community. Afterward, Martilotti sent the document to the Vatican.

Colb also gave the museum the letter a messenger delivered to his father from Yitzhak “Antek” Zuckerman, a leader in the Warsaw ghetto, declining an offer to be smuggled out. Years later, Colb said, his father visited Zuckerman at Lohamei HaGetaot, the kibbutz that Zuckerman and other ghetto fighters founded.

By then, the Colbs were settled in New York, where Ben Zion ran his business manufacturing zipper-making machines and, at a Manhattan synagogue, led classes in Daf Yomi (learning a page of Talmud daily). Between them, Ben Zion and Clara suffered great losses in the Holocaust: all four parents, six siblings, a sister-in-law and a nephew. Ben Zion’s sister Slava had left the Colbs’ hometown of Strzyzow, Poland, before World War II.

Since his mother’s death, Colb has found several people whom his father rescued, among them the brothers Alter and Yitzhak Weinberg, who live in Israel, and Blanche Fixler, formerly Blanca Brunner, a New York resident.

He isn’t intent on locating more people, but Cohen is.

“There are parts [of the rescue] we don’t know, which is why we’d like to find children who were smuggled,” Cohen said.

The survivors, she said, “all could be pieces of the puzzle.”

(Please email Hillel Kuttler at seekingkin@jta.org if you were rescued by Ben Zion Kalb/Colb and his colleagues. If you would like “Seeking Kin” to write about your search for long-lost relatives and friends, please include the principal facts and your contact information in a brief email. “Seeking Kin” is sponsored by Bryna Shuchat and Joshua Landes and family in loving memory of their mother and grandmother, Miriam Shuchat, a lifelong uniter of the Jewish people.)

A list of 162 people saved by Ben Zion Kalb (via the U.S. Holocaust Memorial Museum)