At Streit’s 90-year-old Lower East Side factory, ‘the men’ turn out their last matzah batch 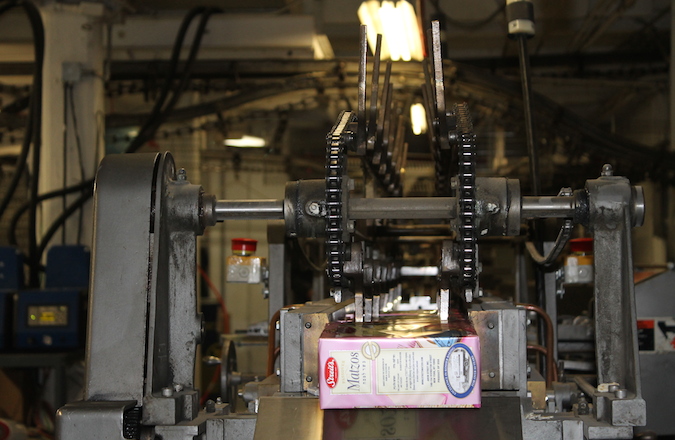 “It’s like I tell my family members: none of you own a car from 1935, why do you think a matzah factory from 1935 is what we should be using today?” says Adler, one of Streit’s Matzos‘ 11 co-owners.

This is the line of thought behind the imminent closing of the Streit’s matzah factory, a longtime Jewish fixture in a city neighborhood that once was home to one of the highest concentration of Jews in the country.

Streit’s, the last family-owned matzah company in the United States, announced in December that it would be permanently closing its 90-year-old factory after this Passover season because of longstanding mechanical problems and subsequent economic concerns. Sometime in April, the company will shift its matzah production either to its other factory across the river in northern New Jersey, where several other products such as macaroons and wafers are made, or to another non-Manhattan location. 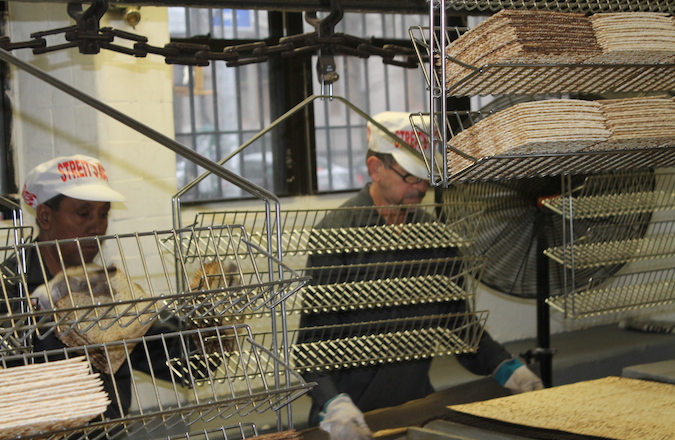 At the Streit’s factory, matzah is broken into pieces and sent to be packaged in the same way it has been for over half a century. (Gabe Friedman)

The greatly gentrified Lower East Side has seen its real estate values skyrocket in recent decades. Although Streit’s has not yet identified a buyer for its landmark building on Rivington Street, the property was estimated to be worth $25 million in 2008, when the company first considered shuttering the factory.

“We should’ve been out of here five or 10 years ago,” says Adler, 63, who oversees the company’s day-to-day operations along with two cousins. “But we feel committed to the men [who work here] and we feel committed to the neighborhood, so we tried to keep this place afloat as long as we could. We probably could’ve stayed here even longer if I could’ve found somebody to work on the ovens.”

The ovens, identified only by “Springfield, Mass” on their side, date back to the 1930s. They are 75 feet long and are continuously fed a thin sheet of dough that emerges from the convection heat in perfect crisp form. Streit’s does not disclose its official production numbers, but Adler says the factory churns out millions of pounds of matzah each year. 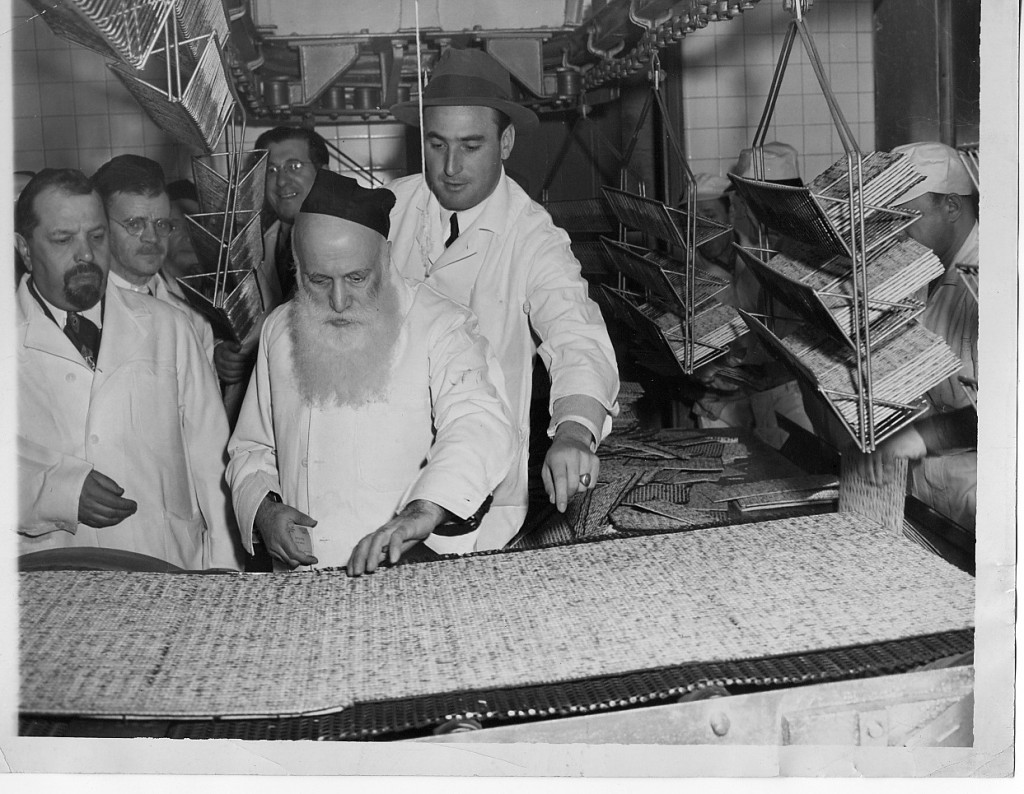 Baked matzah coming out of the oven at Streit’s factory on Manhattan’s Lower East Side, date unknown. (Courtesy of Streit’s Matzos)

However, Adler also estimates that the ovens are now about 25 percent slower than they used to be and he cannot find a mechanic willing to fix them. The slower pace decreases matzah output and affects the product’s flavor.

But the ovens aren’t the only outdated element of the factory. Except for a few electrical parts added to the machinery over the years, nearly all of the other equipment is more than 70 years old. As a result, employees’ tasks have barely changed in over half a century — from mixing the flour in small batches (in under 18 minutes to satisfy kosher requirements) to separating the matzah sheets into pieces that then travel up to higher floors on a conveyor belt.

However, plenty has changed in the matzah business since Adler’s childhood in the 1950s and ’60s, when he liked to spend time picking fresh matzah out of the ovens. Back in the “heyday,” as Adler calls it, of the 1930s through the 1960s, there were four matzah factories in the New York metropolitan area: Horowitz-Margareten and Goodman’s in Queens, Manischewitz in New Jersey and Streit’s in Manhattan. Horowitz-Margareten and Goodman’s were sold to Manischewitz, which was bought by the private equity firm Kohlberg and Company in 1990. (Today it is owned by Bain Capital, Mitt Romney’s former investment firm.)

Outside the soon-to-be-shuttered Streit’s factory on Manhattan’s Lower East Side. (Google Street View)

The Streit’s factory also used to boast a vibrant storefront with lines that spilled outside and around the corner. Today there is still a retail counter, but often it is left unmanned.

“Families have moved on, the Lower East Side has changed, so now we’ve sort of transitioned from a local bakery where people would stop by and pick up their matzah hot out of the oven in 1925 to now where 99.9 percent of our sales are wholesale to distributors who resell,” Adler says.

While his cousins helped at the retail counter, Adler, who joined the company 18 years ago after a law career, says he was always more comfortable working behind the scenes. In the factory’s freight elevator he has clearly ridden in innumerable times, he cracks a rare joke.

“You couldn’t build an elevator like this today,” he says. “It’s passed every safety law from 1925 and not one since.” 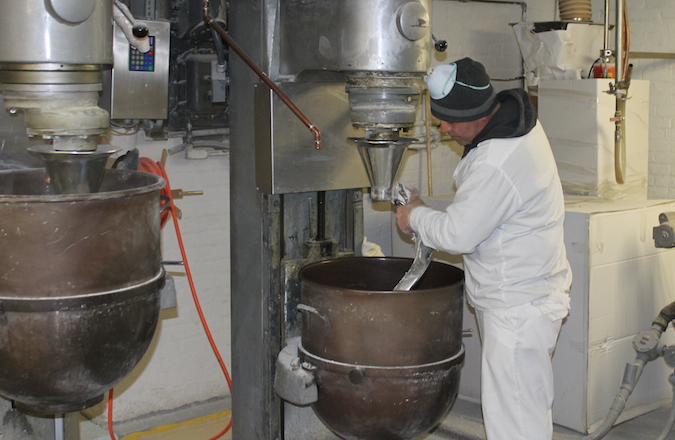 Adler says the 30 factory employees were shocked by the news in December but are taking it “surprisingly well.” The company has told them that there are many jobs available at the New Jersey facility, but only three employees have taken the company up on the offer.

Many of “the men,” as Adler calls the employees, live in Queens and take public transportation to work, meaning that a potential commute to New Jersey would be difficult. Streit’s is working with the New York Department of Labor to help them find new jobs.

Anthony Zapata, who has worked at Streit’s for 33 years, and who Adler says does everything from packing matzah to putting out fires (“literally, not figuratively”), tells JTA that he is very depressed about the factory’s closing. He says the increased transportation costs of traveling to New Jersey would be too much for him. 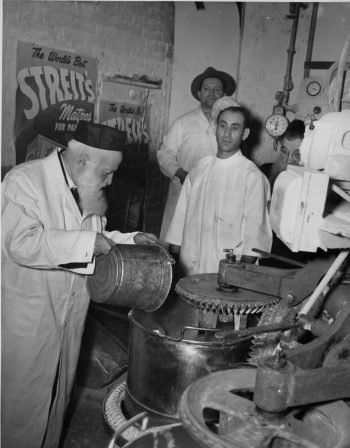 Mixing water with flour to make matzah dough at the Streit’s factory on Manhattan’s Lower East Side, date unknown. (Courtesy of Streit’s Matzos)

Zapata, 53, says that all the employees are friends and have barbecues together around the city in the warmer months.

Adler does not betray many emotions on the matter, but he offers a bittersweet anecdote on the neighborhood’s evolution. Shortly before the company first thought of selling the property in 2008, a man living in one of the condos adjacent to the factory complained to Adler about the noise and flour dust coming out of the building. Adler responded to his requests by blocking in and sealing several factory walls, and when he saw the man months later, he told him what he thought would be “good news” about the factory’s potential closing.

“He said, ‘Oh, God, I don’t want condos — there won’t be enough parking on this street!’” Adler recalls. “All of a sudden he liked my noise and my flour dust.

“I don’t know what they’ll do with this building now,” he adds, “but people don’t like change.”