Netanyahu wrote Tuesday to decline an invitation from Sens. Dick Durbin (D-Ill.), the second-ranked Democrat in the chamber, and Dianne Feinstein (D-Calif.) the top-ranked Democrat on the Intelligence Committee, to meet privately with the chamber’s Democratic caucus in part to clear away bad feelings about his March 3 speech.

“Though I greatly appreciate your kind invitation to meet with Democratic Senators, I believe that doing so at this time could compound the misperception of partisanship regarding my upcoming visit,” Netanyahu wrote in the letter.

The Israeli leader had organized the speech with Rep. John Boehner (R-Ohio), the House speaker, who did not consult with the White House or Democrats in issuing the invitation, which was made in the name of both parties. Obama administration officials are furious with the invitation and Netanyahu’s acceptance of it, in part because the speech comes just two weeks before the Israeli elections.

The speech is “destructive of the fabric of the relationship,” Susan Rice, the national security adviser, told television journalist Charlie Rose on Tuesday.

“What has happened over the last several weeks, by virtue of the invitation that was issued by the speaker and the acceptance of it by Prime Minister Netanyahu on two weeks in advance of his election, is that on both sides, there has now been injected a degree of partisanship,” Rice said.

Feinstein and Durbin in their letter had said they wanted to clear away the partisan taint of the speech affair.

“I can assure you that my sole intention in accepting it was to voice Israel’s grave concerns about a potential agreement with Iran that could threaten the survival of my country,” Netanyahu said in his letter.

Netanyahu, like many Republicans, rejects Obama’s depiction of nuclear talks under way between Iran and the major powers as constructive, and believes the talks are likely to result in a bad deal. 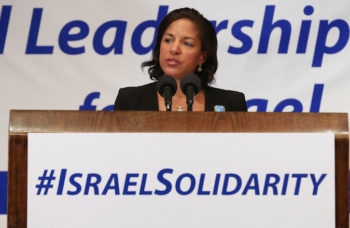 Meanwhile, the Anti-Defamation League urged lawmakers on both sides of the aisle to attend the speech while adding that Netanyahu’s acceptance of the invitation to speak was “ill-advised.”

“While the original decision by Prime Minister Netanyahu to accept the invitation to address Congress without consulting the Democratic leadership was, in our view, ill-advised, now that it is happening, the speech deserves support from both sides of the aisle,” Abraham Foxman, the ADL’s national director, said in a statement.

“The debate about the invitation should not obscure the profound issues at stake for both the U.S. and Israel, which have a common interest in insuring that Iran, the leading state sponsor of terrorism and a nation committed to Israel’s destruction, should not have the capability of building a nuclear weapon.”

The ADL was the most prominent of Jewish groups to speak out against Netanyhu accepting the invitation to the speech. Some 30 Democrats have said they will not attend.

The American Israel Public Affairs Committee, which during its conference March 1-3 will also feature a Netanyahu speech, is encouraging lawmakers to attend the speech, as well.

Criticism of the speech by Democrats intensified ahead of the date. On Tuesday, Sen. Tom Udall (D-N.M.), addressing John Kerry during the secretary of state’s testimony on the State Department budget, said Netanyahu “has created a very divisive situation.”

“I don’t know of any other time that the administration has been ignored,” Udall said.

Rep. Steve Cohen (D-Tenn.), meanwhile, became the fourth Jewish lawmaker to say he would not attend the speech. His statement, blaming Netanyahu and Boehner equally for the tensions, was notable in that Democrats until now tended to place more of the blame on Boehner.

“I believe, as do many conscientious members of Congress, that the speech is political theater by Prime Minister Netanyahu, the head of the Likud Party, just two weeks before the elections in Israel,” Cohen said.

The Tennessee lawmaker urged Boehner to make it a condition of the speech that Netanyahu not use video of the address in political ads.